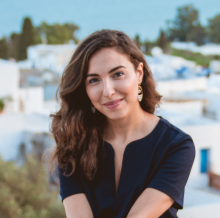 Wafa Ben Hassine is the MENA Policy Counsel for Access Now, an organization defending and extending the digital rights of users at risk. She is a New York qualified attorney specializing in international law and technology. Ben Hassine primarily writes about women’s rights, digital rights in the Arab world, and transparency in government. Most recently, she completed an Open Technology Fund fellowship at the Electronic Frontier Foundation, where she researched counter-terrorism and cybercrime laws in select Arab countries and their impact on various human rights. Prior to her fellowship, Ben Hassine interned at the Appeals Chamber of the Special Tribunal of Lebanon in The Hague and the U.S. Department of State Bureau for Democracy, Human Rights and Labor in drafting its annual human rights reports. Ben Hassine received her J.D. from the University of Denver Sturm College of Law, and her B.A. in Political Science from the University of California San Diego, where she served as student body president. After completing her undergraduate studies, Ben Hassine moved back to Tunisia. While there, she worked as a legislative aide to a National Constituent Assembly member, where she helped draft the preamble of the country’s new constitution. Ben Hassine also co-founded the OpenGovTN initiative in Tunisia, which aims to influence governmental institutions to be more transparent and open.