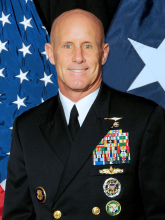 Born in Newport, Rhode Island, Vice Adm. Robert Harward grew up in a Navy family and graduated from the Tehran American High School in Iran. After enlisting in the Navy, he was awarded a fleet appointment to the United States Naval Academy where he received his bachelor’s degree in 1979. He holds a master’s degree in international relations and strategic security affairs, served as a federal executive fellow at RAND and is a graduate of the Massachusetts Institute of Technology Center for International Studies, Foreign Policy Program Seminar XXI.

Harward qualified as a surface warfare officer aboard the destroyer USS Scott (DDG 995) and then transferred to the Naval Special Warfare community. He was the “Honor Man” of Basic Underwater Demolition (BUD)/Sea, Air, Land (SEAL) class 128 and has served in both East and West coast SEAL teams.

He served in the executive office of the president at the White House where he was on the National Security Council as the director of Strategy and Policy for the office of Combating Terrorism. His first flag assignment was chairman of the Joint Chiefs of Staff representative to the National Counterterrorism Center (NCTC), as a member of the Senior Interagency Strategy Team. Additionally, he served as deputy commander, U.S. Joint Forces Command and most recently he served as commander of Combined Joint Interagency Task Force (CJIATF) 435 from 2009 to 2011 in Afghanistan. Harward commanded troops in Afghanistan and Iraq over six years after Sept. 11, 2001.