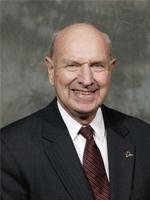 Pickering played a critical role as Ambassador during the first Gulf War when he helped lead the United Nations Security Council’s response to Iraq’s invasion of Kuwait.

He is currently a co-chair of the International Crisis Group, and a member of the Council on Foreign Relations and the Henry L. Stimson Center boards of directors. He is on the advisory boards of the Partnership for a Secure America, the Eurasia Group, and America Abroad Media. He also serves on the guiding coalition of the nonpartisan Project on National Security Reform.