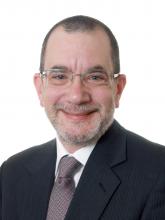 Dr. Karasik is currently a Senior Advisor to Gulf State Analytics, a geo-strategic consultancy based in Washington, DC. He was an adjunct lecturer at the Dubai School of Government where he taught graduate level international relations. Karasik was a senior political scientist in the International Policy and Security Group at RAND Corporation. From 2002-2003, he served as director of research for the RAND Center for Middle East Public Policy. He is a specialist in geopolitics and geoeconomics for the MENA and Eurasia regions and frequently conducts studies and assessments of future trajectories. Dr. Karasik received his Ph.D in history from the University of California, Los Angeles in four fields: Russia, Middle East, Caucasus, and an outside field in cultural anthropology focusing on tribes and clans from Central Asia to East Africa. He wrote his dissertation on military and humanitarian operations in the northern port city of Arkhangel’sk and their impact on political institutions during the Russian civil war.