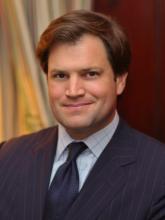 RP Eddy is CEO of Ergo, a global intelligence and advisory firm which the Harvard Business Review praised as “breaking from industry orthodoxy” with a “radically new model” of consulting. He is also Chairman of Ergo Investment Partners, Ergo’s investment arm, and CEO of Four Rivers, a Burma-focused holding company.

Before entering the private sector, RP spent many years in public service. He served as Director at the White House National Security Council, Senior Advisor to the Secretary of Energy, Chief of Staff to the U.S. Ambassador to the UN Richard Holbrooke, and Senior Policy Officer to the UN Secretary-General, where he served as an architect of the Global Fund to Prevent AIDS, TB, and Malaria. Before founding Ergo, Eddy was a Managing Director at the Gerson Lehrman Group and a Team Leader at the Monitor Group.

The World Economic Forum honored Eddy as a "Global Leader for Tomorrow." He is a member of the Council on Foreign Relations, and has been a Senior Fellow or Associate at Harvard University, the Madison Policy Forum, and the Manhattan Institute. He has advised the New York Police Intelligence and Counterterrorism divisions, was the co-chair of Los Angeles City Counterterrorism Committee, and was selected by the Center for American Progress and Foreign Policy Magazine as one of "100 of America's most esteemed terrorism and national security experts."

RP has testified in front of the U.S. Congress and makes frequent media appearances, including on CBS, CNN, Fox News, NPR, Charlie Rose, and others. He has been published in The Times of London, The Wall Street Journal, and other outlets. Eddy has a B.Sc in Neuroscience from Brown University.