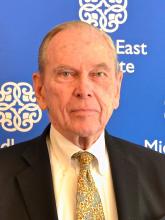 Amb. (ret.) Richard W. Murphy had a 34-year career in the U.S. Foreign Service. After retiring in 1989, he joined the Council on Foreign Relations in New York as the Hasib J. Sabbagh Senior Fellow for the Middle East (1989-2004).

At the start of his diplomatic career, he was posted to Salisbury, in the former Southern Rhodesia; Beirut, Lebanon; Aleppo, Syria; Jeddah, Saudi Arabia; and Amman, Jordan. From 1968 to 1971 he was country director for the Arabian Peninsula and director of personnel for the Bureau of Near Eastern affairs. In 1985 he was named career ambassador, a title held by only five diplomats serving at any given time. Between 1983 and 1989, he was assistant secretary of state for Near East and South Asian affairs. During this time, he took an active role in the Israeli-Arab peace process. In 1971 President Nixon nominated him as ambassador to Mauritania, and in 1974 he became ambassador to Syria. He later served as ambassador to the Philippines and Saudi Arabia.

Amb. Murphy is a frequent commentator for NPR, CNN, BBC and FOX News. He has written for the New York Times, Washington Post, Financial Times, International Herald Tribune and Christian Science Monitor. He is a trustee of the American University of Beirut.