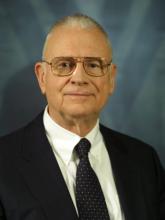 The Honorable Lee Hamilton is a former member of the U.S. House of Representatives who served the 9th Congressional district of Indiana from 1965 until 1999. Following his departure from Congress he has served on a number of governmental advisory boards, most notably as the vice chairman of the 9/11 Commission.

He chaired the House Committee on Foreign Affairs and the U.S Permanent Select Committee on Intelligence during his 34-year tenure in Congress.

He co-chaired the Iraq Study Group organized by the United States Institute of Peace in 2006 and the National Security Preparedness Group (NSPG) at the Bipartisan Policy Center. He serves as an advisory board member for the Partnership for a Secure America and for America Abroad Media.

Hamilton was also the former president and director of the Woodrow Wilson International Center for Scholars.