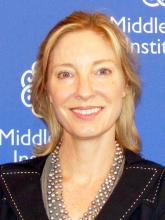 Kate Seelye is vice president of the Middle East Institute (MEI), where she oversees communications, outreach, and programs, including the institution’s growing arts and culture program. She also serves on the board of the Ali Vural Ak Center for Global Islamic Studies at George Mason University.

Prior to joining MEI in 2009, Seelye worked as a radio and television journalist covering the Arab world from 2000-2009 from her base in Beirut, Lebanon. She reported on the region for National Public Radio, the PRI/BBC show, “The World,” PBS TV’s “Frontline/World” documentary program, and the renowned Channel Four British investigative television news series, “Unreported World.” Prior to that she was a producer for the PBS “Newshour” based in Los Angeles, CA, and also worked at the award-winning business program, Marketplace Radio.

In 2004, Seelye was awarded a Fulbright scholarship to research the history of the early Arab-American relationship. That same year, she received an honorary doctorate from her alma mater Amherst College for her efforts to increase American understanding of the Middle East. She is the recipient of several journalism awards, including the Alfred I. duPont-Columbia Award for NPR’s team coverage of the war on Iraq. Seelye spent her childhood in Saudi Arabia, Tunisia, and Syria, where her father served in the U.S. Foreign Service.