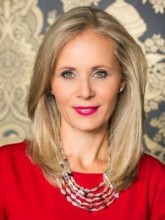 Deborah Lehr serves as the Chief Executive Officer of Basilinna, a strategic business consulting firm focused on China and the Middle East. In addition, Ms. Lehr is Vice Chairman of the Paulson Institute, a think tank founded by former Treasury Secretary Hank Paulson located at the University of Chicago.

Ms. Lehr previously built and managed two successful consulting businesses representing diverse Western and Chinese companies such as Sesame Workshop, Tory Burch, Goldman Sachs, JP Morgan, Pfizer, Sony Music, Time Warner and Boeing. She provided strategic advice and counsel on their growth in China and other markets. In addition, she served as Senior Advisor to the Chairman and CEO of Merrill Lynch, and was a Senior Managing Director at the New York Stock Exchange focused on emerging markets. Lehr was President of Stonebridge China, with offices in Beijing and Shanghai. Prior to joining Stonebridge, Lehr was a partner at Mayer, Brown, Rowe & Maw, a global top-10 law firm, where she helped build a successful trade business.

Lehr also served in the US Government where she was a lead negotiator for China's WTO Accession at the US Trade Representative, a Director of Asian Affairs at the National Security Council, and involved in export control and trade policy issues at the Department of Commerce.

Lehr is a founder and serves as Chairman of the Antiquities Coalition, focused on fighting against the looting of cultural heritage by organized crime and terrorist organizations. She is also the founding Chairman of the Capitol Archaeological Institute at The George Washington University. In that capacity, she launched the International Coalition for the Protection of Egyptian Antiquities, resulting in a private-public partnership with the Egyptian government.

Her work on fighting antiquities trafficking is recognized by international leaders. Sameh Shoukry, Foreign Minister of Egypt noted, “Egypt is working alongside regional and international partners such as the Antiquities Coalition to stem the flow of stolen antiquities.” And UNESCO has nominated Deborah as one of its inaugural list of accomplished global women speakers.

Lehr has lived and studied around the world, including China, England, France, and Germany. Her writings appear regularly in the Huffington Post, and have been published in Foreign Affairs, the South China Morning Post, US News and World Report, Caixin Magazine. She has also appeared on television speaking about China as well as Antiquities trafficking. She was recognized by UNESCO as one of the UNESCO List of Accomplished Women Speakers.