Regional cooperation in the Middle East: the Baghdad Declaration 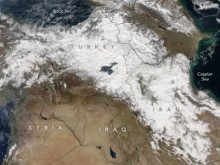 Since 2014, the Middle East Institute (MEI) has convened the Middle East Dialogue, a Track 1.5 initiative involving current and former officials and senior experts from across the Middle East as well as from China, Europe, Russia and the United States. These meetings focus on the conflicts in Syria and Iraq, and on the principles and architecture of a new regional cooperation framework in the Middle East. At the Dialogue’s most recent meeting in Baghdad, the group issued a consensus document outlining Good Neighborhood Principles for the Middle East.

Is a new regional cooperation framework possible in today’s Middle East? What are the principles and institutional architecture that would underpin this framework? What are the obstacles? What are realistic interim confidence-building measures? How can the international community assist in moving this process forward?

MEI hosted a panel discussion involving participants from the Middle East Dialogue to examine the economic growth and peace dividends of regional cooperation, and the challenges in getting regional governments to embrace such an idea. The panel featured Naufel al-Hassan, deputy chief of staff to the prime minister of Iraq; Abdallah al-Dardari, senior advisor on reconstruction for the MENA region at the World Bank; and MEI’s senior vice president for policy research and programs Paul Salem. The panel was moderated by Randa Slim, director of MEI’s program on conflict resolution and Track II Dialogues.

Abdullah al-Dardari is the senior advisor on reconstruction for the Middle East and North Africa at the World Bank. Previously, he was the deputy executive secretary of the United Nations Economic and Social Commission for Western Asia (ESCWA). Prior to his appointment in 2014, he served for three years as ESCWA's chief economist and the director of the Economic Development and Globalization Division. Before joining ESCWA he was the deputy prime minister for Economic Affairs and the minister of planning (and Chairman, State Planning Committee) of the Syrian Arab Republic. Dardari began his career as a journalist in Alhayat, the pan-Arab daily. Then he became UNDP’s assistant resident representative in Syria from 2001 to 2003. He was brought to the government first as head of the State Planning Commission where he served in from 2003 to 2005. It was there that he started authoring Syria's 10th five-year plan, seen as the blueprint of reforms in Syria from 2006 to 2011. In 2005, Dardari was appointed deputy prime minister of Economic Affairs. Dardari also served as minister of planning from 2006 to 2008.

Naufel al-Hassan is the deputy chief of staff to Iraqi Prime Minister Haider Al-Abadi. He has served as commercial counselor at the Embassy of Iraq in Washington, DC, and foreign relations advisor to former Prime Minister Nouri Al-Maliki from 2007-2008. While in exile in the United States in the early 1990s, Hassan formed the first Iraqi-American organization in Arizona. He is the author of many articles focusing on economic impacts in emerging democracies, e-government, and Iraq-Middle East trade relationships.

Paul Salem is senior vice president for policy research and programs at MEI. He focuses on issues of political change, transition, and conflict as well as the regional and international relations of the Middle East.  He has a particular emphasis on the countries of the Levant and Egypt. Salem writes regularly in the Arab and Western press and has been published in numerous journals and newspapers. Salem is the author and editor of a number of books and reports including From Chaos to Cooperation: Toward Regional Order in the Middle East (ed. with Ross Harrison, 2017), Broken Orders: The Causes and Consequences of the Arab Uprisings (In Arabic, 2013), “The Recurring Rise and Fall of Political Islam” (CSIS, 2015), “The Middle East in 2015 and Beyond: Trends and Drivers” (MEI 2014), Bitter Legacy: Ideology and Politics in the Arab World (1994), Conflict Resolution in the Arab World (ed., 1997).  Prior to joining MEI, Salem was the founding director of the Carnegie Middle East Center in Beirut, Lebanon between 2006 and 2013.  From 1999 to 2006, he was director of the Fares Foundation and in 1989-1999 founded and directed the Lebanese Center for Policy Studies, Lebanon's leading public policy think tank.

Randa Slim is director of conflict resolution and the Track II Dialogues program at MEI and a non-resident fellow at the Johns Hopkins University School of Advanced and International Studies (SAIS) Foreign Policy Institute. A former vice president of the International Institute for Sustained Dialogue, Slim has been a senior program advisor at the Rockefeller Brothers Fund, a guest scholar at the United States Institute of Peace, a program director at Resolve, Inc, and a program officer at the Kettering Foundation. A long-term practitioner of Track II dialogue and peace-building processes in the Middle East and Central Asia, she is the author of several studies, book chapters, and articles on conflict management, post-conflict peace-building, and Middle East politics.