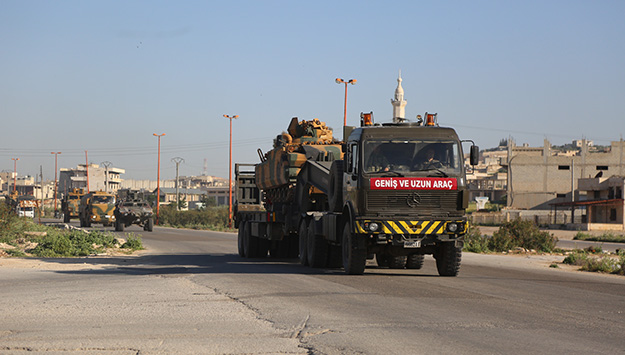 Read the full article on War on the Rocks

After several days of speculation surrounding a possible Turkish intervention, on Oct. 8 Turkish reconnaissance troops crossed into Syria’s northwestern province of Idlib to scope out a first phase “de-escalation” deployment. Turkey’s move came within the broader context of a Russian-led initiative to de-escalate the conflict in Syria by focusing on specific geographic zones, of which Idlib was the fourth. In the days that followed the Oct. 8 deployment, limited numbers of Turkish troops used small country roads to establish thin lines of control spanning between the Idlib border town of Atmeh, east through Darat Izza and into Anadan in Aleppo’s western countryside. Two much larger convoys of at least 50-100 armored vehicles crossed at night on Oct. 23 and late on Oct. 24, effectively completing Turkey’s initial objectives.

The loose buffer zone that resulted serves primarily to place Turkish troops in a prime position to monitor and contain the Kurdish People’s Protection Units (YPG) in their stronghold of Afrin, 30km north of Darat Izza. It was from Afrin that YPG militiamen and women had launched repeated attacks on Syrian opposition positions in northern Idlib, indicating the Kurdish group’s likely intent to expand aggressively southward. The YPG’s stronghold in Afrin also gave it the means to defend against any future attempt by Turkish-backed opposition forces to retake YPG-occupied towns like Tel Rifaat. Turkey saw these strategic realities as security threats, given the YPG’s structural and ideological affinity with the Kurdistan Workers Party (PKK), a designated terrorist organization that has fought a deadly insurgency against the Turkish state for more than 30 years.

Notwithstanding the significance of a Turkish intervention in Idlib, the development raised eyebrows for another reason: Turkey’s soldiers had been provided an armed escort into Idlib by none other than the jihadist group Hayat Tahrir al-Sham (HTS). Therein followed a flurry of accusations of Turkish collusion with al-Qaeda that although understandable, largely missed the potential significance of developments up to that point. I was in Turkey in the days leading up to the operation and was near the border as it began, meeting with a broad range of Syrian opposition groups and figures.