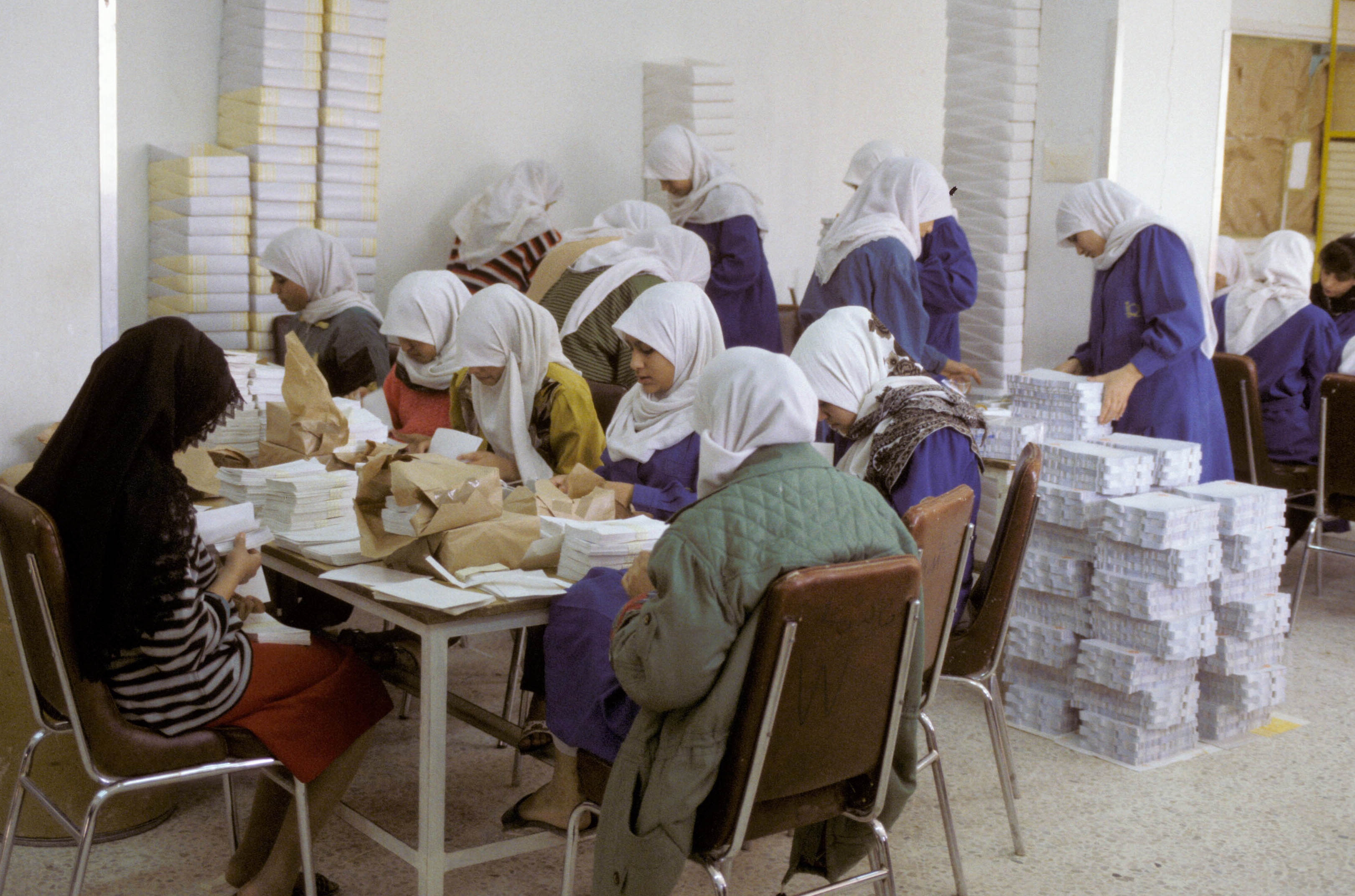 It is estimated that over four million Iraqi refugees have fled to neighboring countries in the region since the 2003 war began. While migration continued after the war, the peak of this influx was witnessed particularly in and after 2006 due to the acceleration of violence in central and southern Iraq. More particularly, the majority of these refugees fled due to direct threats to their lives and their immediate families.

It also is estimated that the number of Iraqi refugees in Egypt ranges between 20,000 and 40,000 including those not registered with the United Nations High Commissioner for Refugees (UNHCR).[1] The Iraqi community in Egypt has often been neglected, owing to the fact that their estimated number is less than their counterparts in the other neighboring countries, especially Jordan and Syria. While the Iraqis living in Egypt appear to be different from the others, their socioeconomic situation is just as difficult.

Refugees in Egypt do not have access to public services owing to Egypt’s reservation on relevant clauses to the 1951 Convention on the Status of Refugees. Due to their lack of access to public services, they always have been perceived by policymakers and by themselves as temporary, pending one of UNHCR’s “durable solutions” (i.e., return to country of origin, local integration, or resettlement to a third country as the most preferred).[2]

The gap in providing UNHCR assistance has resulted in refugees adopting other strategies such as community-based support systems. [3] Moreover, some refugee groups take part in unskilled labor or count on assistance from organizations and remittances from family and friends in countries of resettlement as sources of income in Egypt. Yet community-based support remains an integral source helping African refugees survive socially and economically in Egypt.

The Refugee Scene in Egypt

The refugee scene in Cairo is composed of three main layers: Intergovernmental Organizations (or IGOs, mainly the UNHCR and International Organization for Migration or IOM), service providers manifested in churches or legal aid organizations, and community-based organizations (CBOs). The African refugee communities in Cairo are known to be highly active in their community support systems. To date, more than 30 CBOs are operated in Cairo by the Sudanese community alone. Their services can include providing trainings, services, and, in some cases, funds. Most of them operate a kindergarten to accommodate children of full-time working mothers most of whom hold jobs as domestic workers.

Despite the fact that the majority of these CBOs face continuous challenges in terms of managing and funding their organizations, they still support individual refugees and act as at least a social outlet for these refugees to meet and share ideas or even problems.

Despite the fact that Iraqis share with other refugees the same restrictions on public services, their social and economic coping mechanisms remain very different in Egypt. Iraqi refugees depend mainly on savings and remittances for their livelihoods in Egypt.[4] Yet their uniqueness as a refugee community in Egypt in their being a highly educated middle class community who do not readily engage in unskilled labor, especially for Egyptians. Their concern to provide the best education for their children has driven them to spend huge amounts of money on private school and university fees.

Iraqis in Jordan and Egypt tend to count primarily on transnational and internal social networks (in the case of the Jordan and Syria) as a source of information and economic survival.[5]

Despite the fact that active Iraqis in Egypt tend to criticize the prohibition on their creating their own CBOs, many Iraqis praise this policy. The Iraqis in Egypt are very diverse in their sectarian affiliations as well as professional backgrounds and political orientations. For some, an identifiable Iraqi community would threaten their security in Egypt, lest the parties targeting them in Iraq should know their current places of residence. Despite the fact that they live in clustered areas, they prefer to restrict their contacts with one or two Iraqi families whom they trust. In these instances, they tend to trust their new friends in different aspects, but they continue to refrain from discussing their reasons and conditions of displacement from Iraq.

The Role Of Nongovernmental Organizations (NGOs)

In addition to UNHCR and IOM, there are five churches and NGOs serving the Iraqi community in Egypt. Two of these organizations — Caritas and Catholic Relief Services — are UNHCR implementing partners. Caritas provides health services, while Catholic Relief Services provides tuition waivers and, recently, an awareness program for return. The Egyptian Foundation for Refugee Rights (EFRR) also supports Iraqis, by representing them legally in local courts in Egypt.

In June 2008, the first Iraqi-focused organization was initiated. It serves as a legal aid organization, helping those who are eligible for resettlement according to UNHCR and IOM criteria. Currently, this project is operating under the auspices of St. Andrew’s Church and congregation in Cairo. The office has recently extended its services to include psychosocial support to clients. Iraqis, among other refugees, also receive English classes provided by Student Action for Refugees (STAR) operating under the auspices of the American University in Cairo.

Iraqi resettlement to the United States increased to 17,000 in the fiscal year 2009,[7] and by March 2009 over 75,000 Iraqis are estimated to have been resettled to the United States and 16 other Western countries.[8] However, resettlement by UNHCR is anticipated to decrease in the future due to funding constraints.[9] Meanwhile, Iraqis in Egypt — due to their perception of the challenges of living there — are keener to use the services that will help them resettle. In fact, seeking a resettlement application has turned into a survival strategy in itself among Iraqis. Thus they often misperceive the assistance furnished by service providers. In interviewing Iraqis, some were skeptical of the legal services furnished by a service provider on the grounds that it only serves those who supported the US Army. Yet in fact, a specific category of Iraqis might receive support simply because they are more likely to be resettled (i.e., they fit the IOM resettlement criteria). The existence of service providers to help with resettlement cases also has fostered the impression among Iraqis that resettlement is a right and is the solution to their problems. Although in theory resettlement should be regarded as the best option for Iraqis, resettlement opportunities continue to shrink due to funding limitations and policies.

Transnational Networks as a Coping Mechanism

Whereas the internal communal strategies remain vague[10] owing to factors of mistrust as well as the local restrictive policies (discussed below), the impact of the bigger “Iraqi Diaspora” on Iraqis’ livelihoods in Egypt is very interesting. Iraqis in Egypt are well connected with their family members and friends in Iraq and resettlement countries.

Koser identified three important factors helping the transition of refugees into transitional communities: the decision not to return, the links established with the homeland community, and the institutionalization of the diaspora by the government.[11] The first two factors, which are intertwined, apply to the case of Iraqis in Egypt. They count on their families’ advice and information on security conditions in Iraq more than they do on news announced in the media. According to many, even though kidnappings and killings in Iraq have decreased in comparison to 2006, they are still targeted at the borders and are advised by their families not to return.

Most of the literature has considered remittances to be coming from resettlement countries to countries of origin in the form of ideas and funds that transform the community at home.[12] Yet in the case of Iraqi refugees, remittances are sent primarily from the country of origin to the refugees in the first country of asylum (i.e., Egypt). Having originated from an oil-rich country, Iraqis in asylum in neighboring countries count on remittances sent by family members to sustain them. Thus the flow of information from Iraqis in Iraq and in third countries to Iraqis in Egypt is an important factor affecting the perceptions and the decisions to stay in Egypt.

The Iraqi community in Egypt is highly dependent for its daily survival on the Iraqi diaspora. This dependence is manifested in the flow of information and funds from those in Iraq to Iraqis in Egypt. While this connection has helped them after their displacement, it has added to their isolation and the perception of their lives as temporary in Egypt.

This essay is based on a presentation delivered at the conference of the International Association for the Study of Forced Migration, June 2009, in Cyprus. It also is based on the author’s involvement in three research projects on Iraqis in Egypt that were conducted between February 2008 and June 2009 as well as on volunteer work and social encounters with Iraqi families.

[3]. Katarzyna Grabska, “Who Asked them (refugees) Anyway? Rights and Well-being of Refugees in Egypt,” Development Research Centre on Migration, Globalization and Poverty. The American University in Cairo, Forced Migration and Refugees Studies, 2006.

[6]. There is only one Iraqi community/legal aid office in Egypt under the umbrella of St. Andrew’s Church, which is headed by young American lawyers and interns who are assisted by some Iraqi interpreters. The office is continuously supervised by Egyptian national security staff.

[8]. Jeff Crisp et al., “Surviving in the City: A Review of UNHCR’s Operation for Iraqi Refugees in Urban Areas of Jordan, Lebanon and Syria,” UNHCR, July 2009.

[9]. Crisp et al., “Surviving in the City: A Review of UNHCR’s Operation for Iraqi Refugees in Urban Areas of Jordan, Lebanon and Syria.”

[10]. In September 2008, there was an initiative among the Iraqi leaders and volunteers to raise money for destitute families. The leaders also conducted a focus group to identify the assets the community members have which could be useful in providing free of charge medical and educational services to other families.

The Iraqi community in Egypt is highly dependent for its daily survival on the Iraqi diaspora.