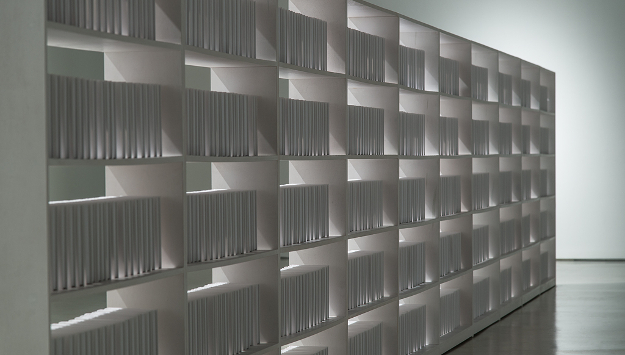 By Frank Piccolo, courtesy of the artist

When the Mongols invaded Baghdad in 1258, they laid siege to the city’s libraries, including the famed House of Wisdom—the largest in the world at the time.

A center for Muslim, Jewish, and Christian scholars, the destruction of the library remains one of the most famous examples of cultural loss during wartime.

Nine centuries later, Iraqi-American artist Wafaa Bilal has taken the fate of the House of Wisdom as a starting point for a cultural project aimed at rebuilding the library of the Baghdad College of Fine Arts, destroyed in the aftermath of the 2003 invasion.

168:01, which began as an installation and blossomed into a larger cultural project, is named after the number of hours in the week that the Mongols threw books into the Tigris until their ink bled dry. The New York-based Bilal hopes to encourage “a new era in Iraq moving beyond destruction and celebrating Iraqi culture and creativity.” The 01 represents the minute after the destruction, the post-war ‘what now?’ moment full of pain but also possibilities.

The installation concept is a simple yet powerfully evocative set piece. Currently installed at the Art Gallery of Windsor, Ontario and moving to the Esker Foundation in Calgary at the end of May, it consists of a large white book shelf, and an adjacent desk and chair.

Lit from above by a soft tungsten light that casts shadows behind it, the shelf contains 1,000 blank white books, numbered and signed by the artist, with their spines marked 168:01. The stark landscape suggests emptiness and loss, and the books stand as solemn tombstones, inviting the viewer to project their own color, light, and meaning onto blank space.

The tomes were custom ordered by a bookmaker in Ohio, who “thought it was a little odd as an order,” relates Bilal, “1,000 blank white books.”

By Frank Piccolo, courtesy of the artist

But there was meaning and a little alchemy behind the bizarre request. As the installation progresses, the blank books will gradually be replaced by real books. This September, they will be shipped to the college, where Bilal plans to also hold workshops for aspiring artists and designers.

168:01 was inspired by Bilal’s Ashes series from 2013, which is being shown concurrently at the Art Gallery of Windsor. Ashes features reconstructed images based on digital news media. Bilal took each image—ranging from the public carnage of wrecked Abbasid architecture to the intimacy of ruined living rooms—and reconstructed it physically as a miniature model, imbued with black market human ashes.

“The images exist in the aftermath of atrocity, with the presence of the human spirit represented only by the monochromatic whiteness of the ashes,” explains Bilal, who says that the images also represent his nostalgia for and distance from his homeland.

“Reconstructing the destroyed spaces provides a way for me to exist within them and, in a sense, to rebuild the places in Iraq where my brother and father were killed,” says the artist.

With Ashes, Bilal’s intent was to “preserve the moment of serenity after the dust has settled: to give the ephemeral moment extended life in a mix of beauty and violence.”

Bilal has dealt with his fair share of loss. His brother, Haji, was killed by a missile at a checkpoint in their hometown of Kufa in 2004. His aging father succumbed two months later “from grief.” As a counterpoint to pervasive media saturation of images of Iraq as a “war zone,” Bilal’s Ashes aims to “slow the viewer down.” By presenting reconstructed images of destruction in Iraq, Bilal hopes to “break down the image so it can be digested properly.”

In terms of 168:01, says Bilal, “reading a book is not a passive experience, like watching something.” The book activates the mind, he notes, and as such is “an imagination empowering object.”

Through his online and Skype lectures to students at the Baghdad College of Fine Arts, Bilal became aware of the huge need for books. His kickstarter campaign to raise funds for over 1,200 titles requested by students enjoyed a huge international response, with the initial goal of raising $9,000, it reached $59,000 in a few weeks.

“The people who responded to the campaign wanted to feel connected to the idea of rebuilding Iraq,” says Bilal. “They came from all walks of life: people interested in books, the Iraqi diaspora, some American veterans against war, librarians, and others.” Many are also volunteering in the processing and cataloguing of the books received, which have now surpassed the 1,200 requested.

In addition to technical books about ceramics and plastic arts, contemporary art history, and conceptual art, there were many requests for books about the German neo-expressionist Anselm Kiefer—whose bold exploration of the horrors of war seems to resonate with young Iraqis. In New York City, a group called Creative Time donated 200 books while individual artists, such as Kathleen Maqueen, offered from their personal collection.

Besides the traditional appetite for literature in Iraq—as the old proverb goes; Egyptians write, Lebanese publish, Iraqis read—in a place where electricity and Internet access is sporadic, books are also practical objects. The Baghdad College of Fine Arts, explains Bilal, “used to be the best in the region if not the world” and had a well-established tradition of sending students abroad to Britain, the United States, Russia, and Europe.

Its demise did not begin with the burning and looting in the aftermath of the 2003 invasion, notes Bilal. It began with the 12 year U.N. embargo that bankrupted the country, blocked books and educational tools at the border and saw many of Iraq’s best minds emigrate. It was compounded by post-invasion assassinations of academics and intellectuals, and the lack of access to digital knowledge.

In addition to replenishing the actual books in the looted library, the project has now expanded to assist with the physical rebuilding of the interior, which was never properly finished after its destruction in 2003. Students complained of lack of shelving, seating, desks, and a rather bare aesthetic. Now Bilal has brought Iraqi architect Raya Ani on board to liaise with interior design students on ways to make the library more functional and comfortable.

The general concept, relates Bilal, is to create a “warm, inviting interior where people can sit, converse, and read—a gathering place.”

For Bilal, the 168:01 project also resonates with his childhood.

“I grew up in Kufa in Iraq,” he relates. “We lived in a small house with seven siblings so it was hard to study at home. Every morning I would pack my books and go to the library before and after school. I lived among books”

When he was a preschooler, Bilal’s father managed the library in his elementary school and he would accompany him to work, absorbing comics and children’s books.

“My love for the library never faded,” says Bilal, who still enjoys spending afternoons in the N.Y.U. library “bathed in light, reading a book.”

When he fled with his family in the aftermath of the first Gulf War, he, like many other Iraqis, brought as many books as he could carry.

“We used to read to escape reality in the refugee camp,” he recalls. Books became a form of currency, traded between refugees and the hottest items were tomes of poetry.

Bilal remembers bringing D.H. Lawrence’s Lady Chatterley’s Lover with him, which he first read during the 1991 bombing of Kufa. Just as they were for Bilal when living in an isolated refugee camp, the168:01 project is about providing books to young people as “symbolic windows to the rest of the world.”

“We need to break the isolation that still exists for Iraqis,” he says, “and projects like this offer a bridge to other realities.”

The project also offers an opportunity for exchange, breaking down barriers between Iraqis and Americans, and ending the intellectual and cultural isolation of Iraqis. Despite the fraught relationship between the United States and Iraq, “through this simple act of sending books, we can help establish a sense of mutual trust.”

For an ancient nation whose cultural erasure has left parts of it blanker than Bilal’s all-white books, 168:01 offers some encouraging signs of life. Bilal hopes that his project can become “a symbol of ushering in a new era in Iraq.”