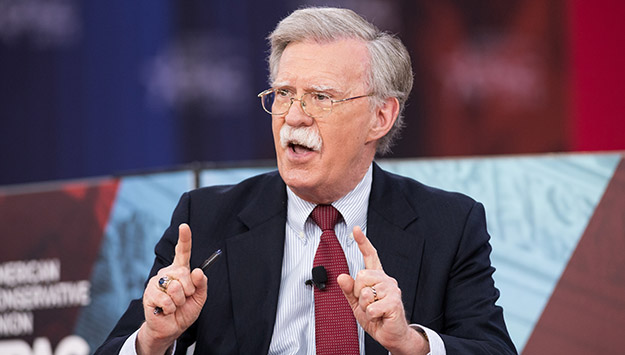 The appointment of John Bolton to the post of national security advisor has sent a bellicose signal to the world. Bolton himself has said that his past views are behind him, but it’s probably for those confrontational views that President Donald Trump hired him. Is Trump assembling a fearsome team as a prelude to deal-making, or is his administration going down the path of real escalation and risk of war? Trump has ignored advisors’ advice before and has fired more White House staff than missiles.

On Iran, Bolton’s appointment will make agreement with the Europeans on a fix for the Iran nuclear deal more difficult, thus making it much more likely that the president will nix the deal on May 12.

Iran will be embattled, but will probably hunker down and use its asymmetric capacities to push back. This might include risk to U.S. troops in Iraq and Syria. Iranian allies can also ramp up missile attacks, as they did this weekend, from Yemen to the capital of America’s ally, Saudi Arabia. And the dust-up between Iranian and Israeli air assets across the Syrian-Israel border a few weeks ago indicates a particularly explosive axis of potential escalation.

In Syria, Bolton will probably reinforce the policy announced by Tillerson in January 2018 that the U.S. will be staying in Syria. And he will likely advocate for a stronger policy of pushback in Syria against the regime of Bashar Assad, the Iranians, and the Russians.

In the Trump White House, uncertainty is the rule, not the exception; and that’s probably just how the president likes it.

A Saudi-Iran war is no longer unthinkable
Bilal Y. Saab, Director of the Defense and Security Program

There's always a risk for national leaders when they embark on long trips abroad: absence during a crisis at home. That's exactly what has happened with Saudi Crown Prince Mohammed bin Salman. During his U.S. tour, which the Saudis carefully planned, Yemen's Houthis lobbed several missiles at Riyadh, killing one person and causing much panic in the kingdom.

It's hard to tell what the Houthis are trying to accomplish. They could be escalating with a view to de-escalate, a classic tactic in war. But that doesn't seem likely. What this attack suggests, in my view, is that a solution to the conflict in Yemen is becoming even more distant.

Its timing is just too curious. Surely the Houthis (and the Iranians) know that the crown prince is in America meeting with officials and businesspeople to cement U.S.-Saudi relations and attract investment in Saudi Vision 2030. The attack embarrasses the young Saudi prince and threatens to sabotage the trip. Who would want to invest in Saudi Arabia if missiles from Yemen rain on the capital every now and then?

With every new Houthi missile that lands in Riyadh, Saudi Arabia's strategic deterrent takes a bad hit. Observers are now laser-focused on Saudi Arabia's response. Will Crown Prince Mohammed go after the Iranians in order to restore Saudi deterrence, or will he limit his response to the Yemeni theater? And perhaps most important of all, where is Washington in this strategic calculus? Will the new team of Trump advisers—particularly Secretary of State Mike Pompeo and National Security Adviser John Bolton, neither of whom has patience for Tehran—push for military action against Iran? Buckle up. The drums of war are once again pounding in the Middle East.

Egyptians go to the polls today in the first of three days of presidential balloting. President Abdel-Fattah el-Sisi is effectively running unopposed for a second four-year term. There is no doubt as to who will win this election, but the government is hoping to boost participation.

The narrowing of political space and crackdown on freedoms and dissent in recent years has rendered these elections neither free nor fair. Sisi makes little mention of the road map to democracy that he had endorsed in 2014, but puts primary emphasis on the war on terrorism and the challenges of economic development.

Critics of the government have much to condemn in terms of authoritarian crackdowns and economic hardships. Supporters of the president emphasize the need for stability after the costly turbulence of recent years, and point to important economic decisions taken during his first term.

In his second term, Sisi will continue to lay emphasis on security and economic development.

In some ways, the elections in Egypt today resemble those in Russia a week ago. The real comparison, however, might be with the recent Communist Party congress in Beijing. There, the party eliminated the two-term limit for the presidency, paving the way for Xi Jinping to potentially be president for life. There are already concerns that the parliament in Cairo could soon do the same.

On the third anniversary of Operation Decisive Storm, the Saudi-led coalition’s military intervention in the Yemeni civil war, both the coalition and the Houthis sought to establish that momentum in the military campaign favored their side. News outlets in the Persian Gulf States mounted a full-court press to argue that military gains on Yemen’s Red Sea coast, around the besieged city of Taiz, and in the north along the Saudi-Yemeni border were pressuring the Houthis to return to the negotiating table. The Houthis responded by launching a first-ever barrage of as many as seven Scud missiles into Saudi territory.

In fact, both sides are exaggerating their military progress. Despite some coalition gains in recent months, the conflict remains essentially stalemated, as it has been since mid-2016. The Houthis control most of the heavily populated north, including the capital, Sanaa, and the internationally recognized government and coalition control the lightly populated territory in the south and east.

The focus on the military conflict may simply be posturing to reassure domestic audiences that the fighting is achieving goals that justify its continuation. The risk is that the exchange will trigger a new upsurge in fighting that will undermine the efforts currently underway, including by new U.N. special envoy Martin Griffiths, to bring the Yemeni parties back to the negotiating table.

In that regard, last week Crown Prince Mohammed bin Salman heard clearly from his interlocutors in Washington, not only on Capitol Hill but also from the Pentagon, that the U.S. remains supportive of the coalition effort but wants to see a decisive move to reach a political resolution to the war.

The EU-Turkey summit in Bulgaria comes at a time of tense relations between the two parties. The European leaders are so uncomfortable with Turkish president Recep Tayyip Erdogan that they decided to hold the summit in the Bulgarian resort town of Varna instead of Brussels. Days before the summit, the tension was on full display.

Turkey has been uneasy about the Greek Cypriot government’s efforts to explore oil and gas around the island. The Turkish navy has been blocking the ships working for the Greek Cypriots from entering some of the zones off the Cyprus coast. Ankara argues that some areas of Cyprus’ offshore exclusive economic zone falls under the jurisdiction of Turkish Cypriots. Last week, the European Council called on Turkey to respect the rights of Cyprus to explore and exploit its natural resources. Turkey has condemned the statement.

European leaders are also wary of Turkey’s backsliding on democracy, Erdogan’s crackdown on critics and his anti-Western statements. Despite the tension, the two sides desperately need each other. The EU leaders need Erdogan on board to curtail migration to the EU. Turkey, on the other hand, wants the EU to revive accession negotiations, update the customs union, and provide visa free travel for Turkish citizens and more money for the Syrian refugees.

It seems the European leaders might be willing to offer Erdogan more money but little else. There is strong resistance in the EU against visa liberalization and updating the customs union. The summit will be sure to have an uneasy atmosphere. As the humanitarian catastrophe in Ghouta worsens by the minute, the area is also witnessing significant military developments. Last week, the regime reached an evacuation deal with two armed groups, and the Russians are currently negotiating a third deal with the biggest group in Ghouta, Jaish al-Islam.

The Syrian regime has divided eastern Ghouta into three sections in order to weaken the collective influence of various armed groups, and has succeeded in striking separate deals in each section. The regime’s first agreement was in Harasta with Ahrar al-Sham, which was the smallest and weakest group in Ghouta. Faylaq al-Rahman soon followed suit. Faylaq fighters, their families, and thousands of civilians were displaced to Idlib as a result of the deal.

Currently, negotiations between the Russians and the leadership of Jaish al-Islam are underway to decide the fate of the third and largest section of Ghouta, Douma. Jaish al-Islam is trying to reach a different deal, because, unlike Ahrar al-Sham and Faylaq al-Rahman, it doesn’t have strong connections with Turkey-backed groups in the north. Additionally, Jaish al-Islam wants a deal that doesn’t include displacing mass numbers of people from Ghouta, a measure that would allow the regime to change the demography in and around Damascus.

Jaish al-Islam and the Russians are negotiating a deal that could allow Jaish al-Islam to maintain the security in Douma as a police force. In exchange, the group would hand its heavy weaponry over to the regime. However, that deal is unlikely to materialize, because Jaish al-Islam currently doesn’t have the leverage to pressure the regime to accept such a deal, nor do the Russians, who have yet to show any on-the-ground leverage over the regime.