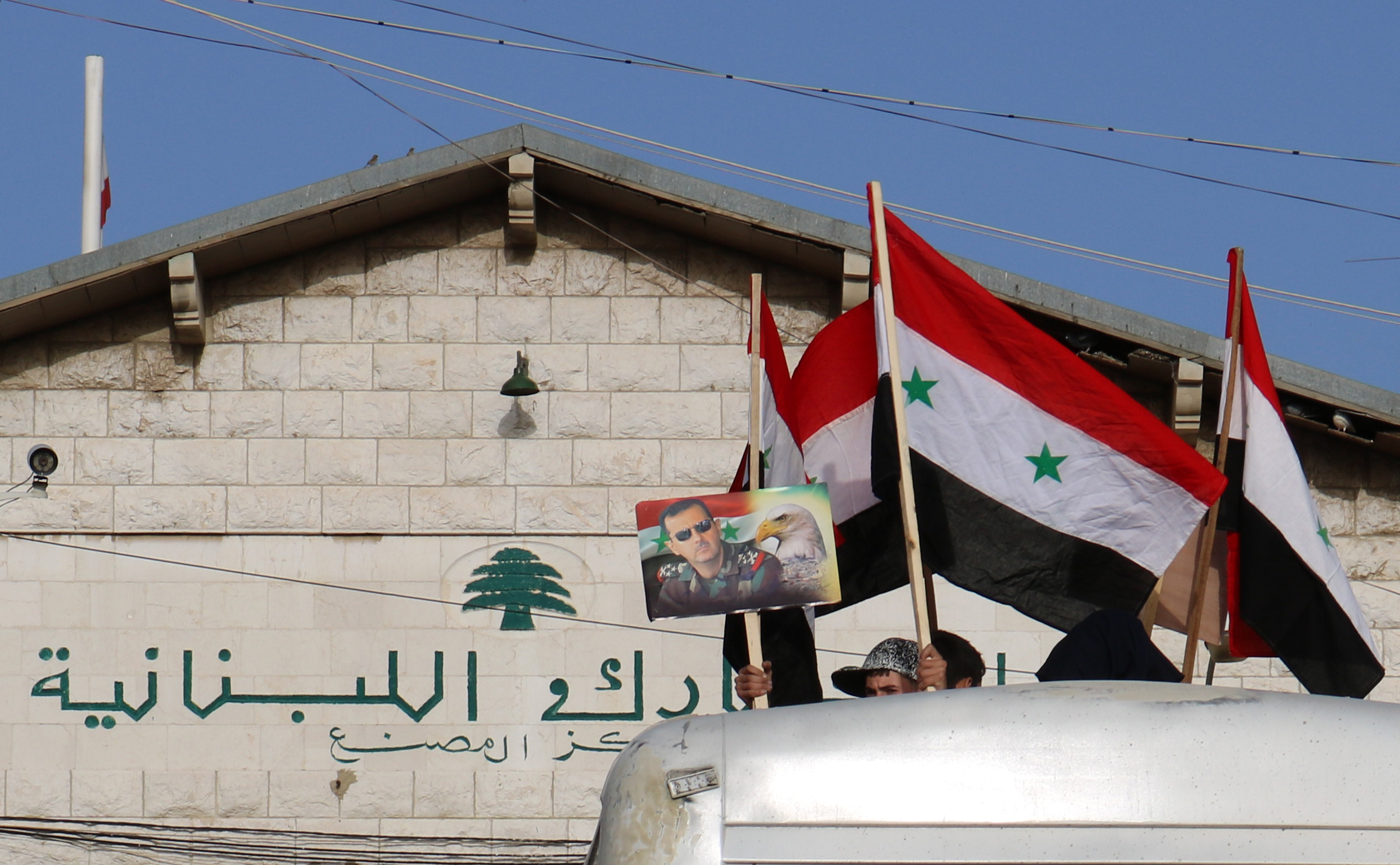 Are religious doctrinal differences primarily responsible for stoking intercommunal fear and hatred? What roles have state, sub-state, and transnational actors played in fomenting sectarian discord? What could be done to avert sectarian violence, foster tolerance and peaceful coexistence, and promote reconciliation? The essays in this series tackle these and other salient questions pertaining to sectarianism in the MENA and Asia Pacific regions. Read more ...

From 1990 to 2005, Syria’s close allies in Lebanon secured electoral victories, thereby ensuring robust diplomatic relations between the two countries.[1] However, the promulgation of UNSC Resolution 1559 in 2004, followed the next year by Syria’s alleged assassination of Rafik Hariri on February 14 and several members of the March 14 anti-Syria coalition,[2] complicated the bilateral relationship, leading to the withdrawal of Syrian troops from Lebanon in April 2005.[3]

Six years later, the eruption of conflict between the Syrian regime and the armed opposition exacerbated the political and sectarian divisions within the Lebanese government, causing it to sever relations with Damascus and dissociate itself from the war. Nevertheless, the Lebanese government eventually was forced to coordinate[4] with the Assad regime in order to manage the refugee crisis and other spillover effects of the conflict. As this essay shows, Beirut’s dealings with Damascus reflect the overarching aim of mitigating the impact of the war on the relations between the Lebanese Sunni and Shiite communities.[5]

The Syrian Conflict and the Lebanese Political Parties

The Syrian conflict had an adverse impact on the political dynamics among the various factions within and across the Lebanon’s sectarian communities. The eruption of the conflict initially raised the hopes of Lebanon’s March 14 Coalition[6] that the Assad regime would be toppled. Thereupon, elements within the Coalition, specifically the Future Movement, reportedly funded and provided shelter for Syrian armed opposition fighters in Arsal (in the northern Bekaa Valley) and Tripoli.[7]

Three factors help to explain the Coalition’s initial expectations and behavior. First, from its inception in 2005, the Coalition had consistently taken an adverse position vis-à-vis Damascus.

Second, the Sunni Future Movement, the coalition’s most powerful component, was forced to adopt a strongly anti-Damascus position in order to respond to Lebanese Sunni outrage and indignation at the actions taken by the Alawite Assad regime. The Future Movement’s sympathy and support for the anti-Assad opposition, predominantly Sunni, stemmed from its fear of sectarian outbidding (i.e., from the concern that Sunni political opponents, particularly Salafi groups, might employ sectarian rhetoric[8] as a means of raising their popularity at the Movement’s expense).

Third, the March 14 Coalition sought to capitalize on the outcome of the conflict to weaken Hezbollah. It is widely known that Hezbollah, the main Shiite party in Lebanon, has robust political and military relations with Syria. If the regime were to have been toppled, its Lebanese allies, Hezbollah in particular, would be severely weakened, and the March 14 Coalition’s position correspondingly improve. In fact, the Coalition’s domestic political position did improve markedly, though only temporarily, as a result of Hezbollah’s decision in May 2013 to deploy its troops to help shore up the Assad regime against the armed opposition.

On the other side, Hezbollah and its allies accentuated the importance of Syrian-Lebanese relations. They viewed the conflict as targeting the regime and, by extension its own interests. Hezbollah offered various justifications for its intervention in the Syrian conflict, most notably the claim that it had come under direct threat and that its actions were aimed at protecting the Resistance and Lebanon from the aggression of armed opposition groups.[9]

Thus, Hezbollah urged the Lebanese government to coordinate its efforts with Damascus to tackle both the smuggling of fighters and the refugee crisis. Hezbollah further justified its intervention in the Syrian conflict as a means of countering the Islamic State in Iraq and Syria (ISIS), which was making extensive use of sectarian political rhetoric against Shiites and Christians and which, by 2014, had succeeded in extending its control over a swath of northern Iraq.

ISIS and the Syrian-Lebanese Border

The infiltration of opposition fighters between the two countries raised the sectarian fears of several communal groups in Lebanon. Beirut called on the Syrian authorities to control the infiltration of opposition fighters and suicide bombers to the country. The smuggling of opposition fighters into Lebanon and the occasional formation of military encampments to train fighters and suicide bombers raised the worries of the Lebanese government and people alike. Terrorist attacks against Hezbollah's social milieu in Beirut and Bekaa, in particular southern Beirut (Dahya) and the Baalbeck-Hermal district —Shiite-dominated areas — intensfied these fears. The objective of the attacks was to inflict as much pain as possible on Hezbollah’s social milieu, the Shiite community, in order to effect the withdrawal of Hezbollah forces from Syria and the termination of its support for the regime in Damascus.

The rising concerns of the Lebanese government and several political parties over the smuggling of fighters, corroborated by intermittent clashes between the Lebanese army and the opposition fighters on the borders, forced it to coordinate its military efforts with the Syrian army. This was evident when it decided to expel the terrorist groups, particularly ISIS, from the northern Bekaa. In 2016, the Lebanese Armed Forces (LAF), Hezbollah and the Syrian army launched a massive attack in the foothills of Arsal, against ISIS fighters, which ultimately led to their defeat and withdrawal.[10]

The Battle of Arsal, which involved covert coordination between the two governments, was followed by the somewhat surprising position adopted by President Michel Aoun, namely that he recognizes Bashar Assad as Syria’s president, and that it will deal with him on that basis.[11] Aoun’s position, which contradicts that of Prime Minister Saad Hariri — a staunch opponent of a rapprochement between Beirut and the Assad regime — stems mainly from his fears of additional negative spillover effects of an uncontrolled border with Syria.

The refugee crisis is arguably the most complex issue facing the two governments. According to the UN High Commissioner of Refugees (UNHCR), the number of registered Syrian refugees in Lebanon as of mid-2018 was 986,942,[12] nearly one-fifth of the country’s total population. This massive refugee influx has been an enormous economic burden on the country.[13] At the social level, the tensions between the hosting villages and cities and the Syrian refugees have risen dramatically, due to sectarian as well as economic factors, provoking questions about the long-term effects of their presence on social stability.[14]

It is therefore not surprising that there have been urgent calls from several Lebanese political parties, particularly Hezbollah and the Free Patriotic Movement, to tackle the refugee issue, and more specifically to secure the refugees’ repatriation. Both parties’ primary concern appears to be the impact of the continued presence of large numbers of Syrians upon the country’s sectarian demographic balance. President Aoun, who considers the refugees as posing an existential threat to the country for this very reason, has stepped up demands for refugees to return to “safe areas.”[15]

Shortly before the parliamentary elections in May 2018, the Lebanese government commissioned the head of the Directorate of General Security, Major General Abbas Ibrahim — a Shiite officer with close ties to Hezbollah and the Free Patriotic Movement — to contact the Syrian government to set a plan in place for the return of refugees.[16]

The conflict in Syria has had myriad spillover effects on Lebanon. The sectarian dimension of the conflict, in particular, has complicated the domestic political dynamics of the various factions and sectarian communities in Lebanon. Initially, it also further worsened the relationship between the Lebanese government and the Syrian regime.

However, even from the earliest stages of the war, the Lebanese government found itself unable either to sever its relations with the Assad regime or to detach itself from the hostilities. As the circumstances surrounding the Battle of Arsal and lately over the issue of the repatriation of refugees illustrate, some measure of coordination with the Assad regime — as distasteful as that may be to some — is necessary to avert the risks posed by the war and its spillover effects to Lebanon’s sectarian balance and the country’s very stability.

[2] The March 14 Coalition was formed after the anti-Syria camp organized a protest on March 14, 2005 calling for Damascus to withdraw its military forces from the country.

[3] UNSC Resolution 1559 called on Damascus to withdraw its military forces from Lebanon.

[4] In 2016, the Lebanese government posted an ambassador in Damascus and covertly coordinated with the Syrian army to combat the Islamic State in Iraq and Syria (ISIS).

[6] The “March 14 Coalition” generally refers Sunni, Druze and some Christian parties that coalesced into an alliance against Syrian interference in Lebanon in the wake of the murder of the former prime minister Rafiq Hariri.

[13] The conflict has cost Lebanon an estimated $20 billion in lost economic activity over the period 2011-16. The unemployment rate has risen from 11% to 25% since the eruption of the conflict due to the influx of cheap Syrian labor. See, for example, Ghazi Wazni, “The Economic Impacts of the Syrian Conflict and Refugees,” Annahar Newspaper, September 12, 2016, https://newspaper.annahar.com/article/466167.

[14] The Lebanese Center for Policy Studies (LCPS), “The Repercussions of the Syrian Refugee Crisis on Lebanon: The Challenges of Providing Services and Creating Jobs" (January 2016), http://www.lcps-lebanon.org/publications/1453288522-syrian_refugee_crisi....