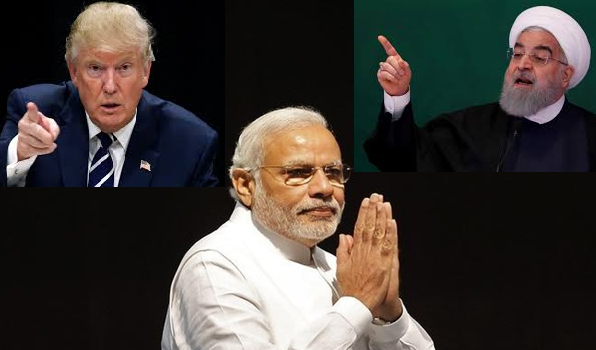 India’s interests and capabilities extend well beyond the sub-continent. This essay is part of a series that explores the geopolitical dimensions, economic ties, transnational networks, and other aspects of India's links with the Middle East (West Asia) — a region that plays a vital role in India's economy and future. More ...

The United States’ recent attempts to maximize economic sanctions against Iran have reached the doorsteps of South Asia. During her visit to Delhi in June, U.S. Ambassador to the United Nations Nikki Haley asked Indian authorities to cease buying oil from Iran.[1] As part of the current U.S. effort, unlike during the previous sanctions period (2012-2015), Washington is threatening to impose secondary sanctions on potential violators of U/S. sanctions even if the latter are non-U.S. entities outside the United States. Were India to fail to comply with U.S. sanctions, Indian banks and companies with financial links to the U.S. banking system could face penalties.

India now finds itself in a precarious situation. On one hand, Delhi does not want to antagonize the United States, with which it has developed a strong relationship over the past two decades.[2] On the other hand, India has had a long-standing generally positive relationship with Iran that it is keen to maintain and in fact build upon.[3] This essay examines the economic, domestic political, and international challenges that the Trump administration’s “maximum pressure” approach poses for India.

India’s crude oil imports from Iran is the most important aspect of the economic dimension of the bilateral relationship. Even during the previous round of Western-led sanctions, India continued to source oil from Iran. Since the implementation of the Joint Comprehensive Plan of Action (JCPOA) in January 2016, India and Iran have renewed efforts to deepen the relationship. The meeting between Indian Prime Minister Narendra Modi and Iranian President Hassan Rouhani this past February yielded nine agreements, including an accord that leases operational control to Shah Beheshti (i.e., part of Chabahar Port) to India Ports Global.[4] The agreements also encompassed taxation, customs duties, and visa requirements, along with cooperation in the agricultural, health, and medical sectors.

Following Haley’s visit in June, Indian Ministry of Petroleum and Gas officials reportedly asked Indian refiners to drastically reduce imports of Iranian oil as of November, and urged them in the meantime to look for alternative supplies.[5] India’s Reliance Industries Ltd has already decided to halt imports while Nayara Energy is also preparing to curb Iranian oil imports.[6]

While India’s imports of Iranian crude in June fell by 16 percent from the previous month, Indian purchases of U.S. reached a record high.[7] This development illustrates an apparent short-term win for the Trump administration in its bid to isolate Iran from its traditional trade partners.

Looking ahead to November and beyond, it is important to note that Iran is currently India’s third-largest supplier of oil behind Iraq and Saudi Arabia.[8] If India were to decide to replace Iranian oil with supplies from other producers, this will almost certainly necessitate increasing its intake from Saudi Arabia and Kuwait.[9] However, following this path would impose a substantial financial burden on India. First, India would stand to lose the advantageous commercial terms (i.e., rupee-denominated deals) that it has enjoyed in purchasing Iranian oil.[10] Second, shifting to alternative suppliers on a long-term basis would require costly upgrading of Indian refineries, some of which are configured to process Iranian grades of crude oil. The increased cost of importing of oil from suppliers other than Iran indefinitely would inevitably drive up oil prices in India.[11]

Increased oil prices in India arising from efforts to comply with U.S. sanctions would have potentially far-reaching domestic implications. Fuel prices in India have always been higher than in neighboring nations due to the tax rates imposed on consumers.[12] During periods when global oil prices have been elevated, Indian consumers have generally considered relatively high fuel prices to be largely justified by such circumstances. However, over the years, the resultant sharp price rise in transportation and daily commodities has severely tested consumer tolerance and will likely escalate citizens’ indignation if India is forced to replace Iranian oil with more expensive alternative supplies.[13]

This issue will feature prominently in the run up to the 2019 general elections in India and be used by to challenge the credibility and efficacy of the Modi government.[14] Moreover, the issue may also have long-term implications in that, if prices remain high, any government that comes to power in 2019 will find itself under immense pressure to lighten the burden of Indian consumers.

Given the delicate tightrope that India walks in West Asia, cutting off Iranian oil has implications that extend beyond its national borders. Owing primarily to its oil import dependence on the Gulf Arab countries as well as on Iran, India has hitherto sought, and managed to balance its relationships by maintaining strict neutrality in the intra-Gulf disputes that have otherwise roiled the region.[15]

However, U.S. pressure on India to cease buying oil from Iran places Delhi in the uncomfortable position of being forced to purchase greater volumes from the Arab nations. There is a risk that Iran would perceive this reconfiguration of India’s supply relationships as being a strategic “tilt” toward Tehran’s Gulf adversaries and primary nemesis, the United States. The consequent cooling of relations between Tehran and Delhi could adversely affect progress in other areas, notably India’s access to the Chabahar Port — regarded by Delhi as an essential node in a multi-modal transportation network bypassing Pakistan and connecting the country to Central Asia through Afghanistan.[16]

Much as it has in other intra-Gulf conflicts, India has maintained a policy of non-interference in the rift between the Saudi-Emirati coalition and Qatar, while expressing support for constructive dialogue between the disputing parties. However, increased dependence on Saudi and Kuwaiti oil imports could conceivably make Delhi more susceptible to pressure from Riyadh to take sides.

Finally, India could lose political leverage with Iran were it to cut crude oil imports. It is possible that Tehran would no longer feel obliged to maintain a neutral stance on Kashmir, and perhaps tilt towards Islamabad and possibly even encourage its regional allies to do so.[17]

In tackling the challenges associated with the U.S. push to throttle Iranian oil exports, the Modi government will be hard-pressed to find a way to balance competing interests and relationships. Initially, Prime Minister Modi’s frequent visits to various countries were lauded as signs of a vigorous and positive foreign policy approach.[18] However, more recently, observers such as Rajesh Basrur have noted that India’s foreign policy under Modi has been dictated, and indeed has been constrained as much by external factors as by domestic considerations.[19] The success or failure of Modi’s “transformative” foreign policy is likely to be judged partly by how effectively his government manages the challenges associated with the Trump administration’s maximum pressure approach to Iran.

Historically, India’s trade ties with Iran have not been adversely affected by Western sanctions. However, neither the Indian government nor Indian companies, given their exposure to the U.S. financial system, can just ignore or easily fend off the Trump administration’s pressure to suspend oil purchases from Iran.[20]

Traditionally, India has sought to maintain a neutral stance in intra-Gulf disputes. Thus, India may attempt to seek a middle path in managing its relations with Iran and the Gulf Arab states in the context of impending U.S.-led oil sanctions against Iran.

The Indian media reported early in July that India’s foreign policy towards Iran would be based on “national interest.” Given that Trump administration officials have expressed their willingness to engage with third countries on a “case-by-case basis,” Indian and American officials are likely to discuss, if not fully resolve, their differences over dealings with Iran in the U.S.-India “2+2 dialogue” scheduled for early September.[21] Moreover, India has also been in talks with European nations to understand how to bypass the sanctions indicating their intent to keep buying oil from Iran.[22]

This is coupled with the fact that the U.S. has reportedly given “informal indications” of having understood India’s reasons to proceed with the Chabahar port project with Iran.[23] India would not want to relinquish this project, especially given that mere 140 kilometres from Chabahar is the Pakistani port of Gwadar, which China is developing as part of the “Belt and Road Initiative” and its own effort to gain improved access to Central Asia. [24]

While the U.S. has withdrawn from the 2015 Iran nuclear deal, its international allies continue to remain its part. Iran and the other countries in the agreement — Russia, Britain, France, China, and Germany — are continuing their attempts to keep it alive. India might wait to see what steps, if any, the Americans take against those nations before finalizing and making public its decision on long-term oil imports from Iran.

India is now stuck in a catch-22 situation. Its above-mentioned willingness to cut oil imports from Iran could lead to strained relations between New Delhi and Tehran in what seems a deliberate effort on the part of India to avoid upsetting Washington. While India may not completely cut off the purchase of Iranian oil, it may consider reducing imports from Iran by half.[25] However, as mentioned earlier, even this “middle course” option runs the risk of straining long-standing India-Iran relations.

[4] Government of India, Ministry of External Affairs, “India-Iran Joint Statement During Visit of President of Iran to India,” February 18, 2018. http://www.mea.gov.in/bilateral-documents.htm?dtl/29495/indiairan+joint+....