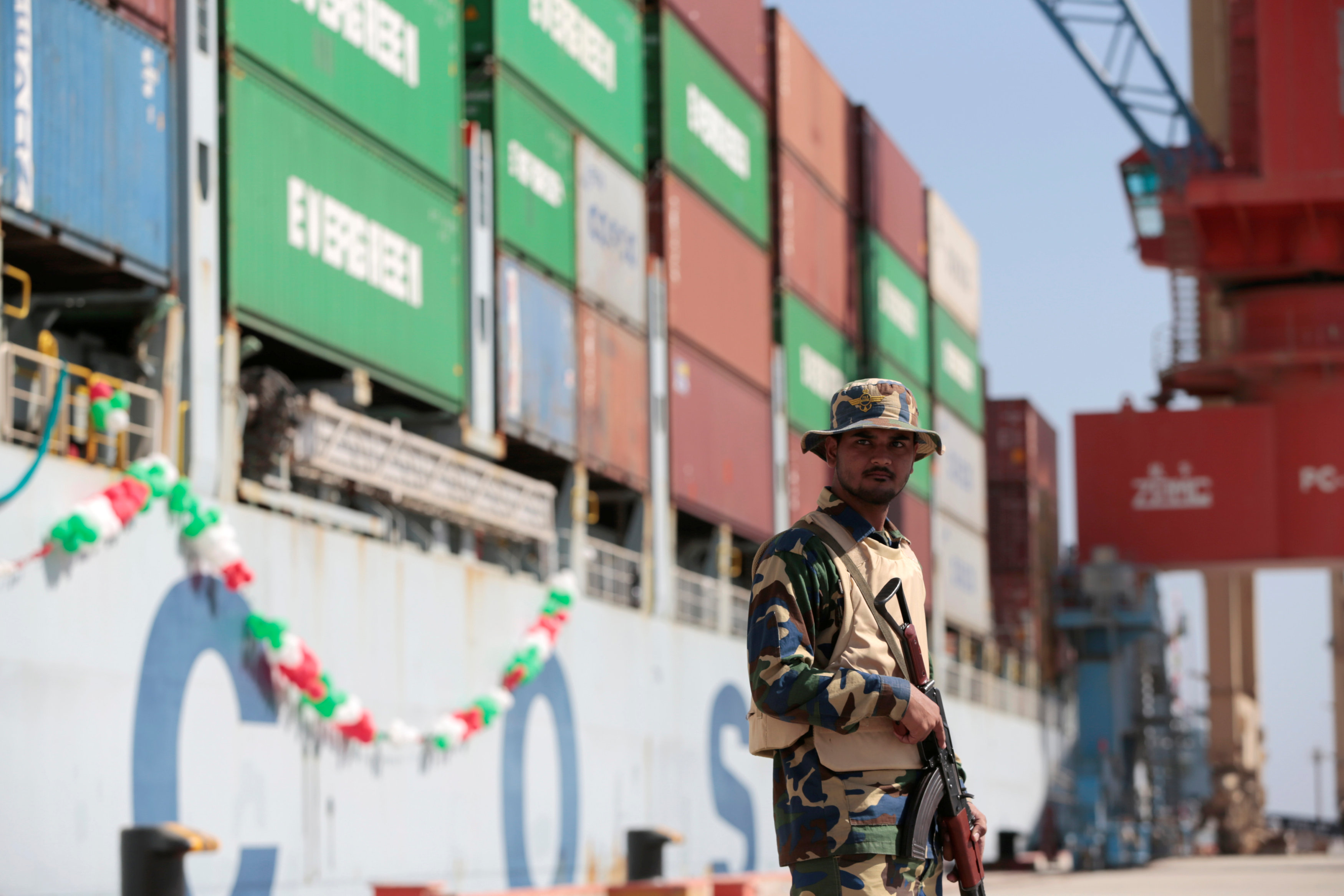 A convoy of 150 Chinese trucks, carrying goods to be shipped abroad arrived at the newly-renovated port of Gwadar in Pakistan on November 12, after having travelled more than 2,000 kilometers from Kashgar in Xinjiang province.[1] At the completion of the run, the first consignment of cargo to traverse the China-Pakistan Economic Corridor (CPEC) was loaded onto Chinese vessels bound for the Middle East and Africa. Three weeks later, a second CPEC route was inaugurated, when a freight train carrying 500 tonnes of commodities left Kunming, capital of Yunnan, for Karachi.[2]

China is already Pakistan’s largest trade and defense partner. But the coming into operation of the CPEC lends a new meaning to, and could transform the relationship between these two “all-weather allies,” including insofar as their ties to the Middle East are concerned — provided that the territorial and maritime security challenges associated with the completion and use of this corridor can be satisfactorily addressed.

On April 20, 2015, China and Pakistan formalized plans for the China-Pakistan Economic Corridor (CPEC) agreement, laying the groundwork for one of the six main corridors comprising President Xi Jinping’s ambitious Belt and Road Initiative.[3] The CPEC, a bundle of projects — some agreed, several currently being implemented, and others still in the process of negotiation — consists of a 3,000 km network of roads, railway lines, energy pipelines and fibre optic cables.

Pakistan Prime Minister Nawaz Sharif and the country’s media have called the CPEC a “game changer.”[4] Chinese officials have described it as the “flagship project” of a broader policy aimed at enhancing “regional economic connectivity.”[5] The CPEC offers several potential benefits for China. The corridor not only affords the possibility of faster transport of energy supplies from the Persian Gulf, but also provides another access route to the Indian Ocean, thereby allowing supplies to bypass the Malacca Straits that could be blocked in times of tension.[6] Second, the corridor could help spur economic development in the landlocked western interior of China. Third, having a physical “footprint” in Gilgit-Baltistan could enable China to disrupt the movement of Uighur militants. Finally, the Gwadar Port could become a new regional service point for Chinese warships, along the lines of its base in Djibouti.

For Pakistan, the CPEC is more than simply a “route” or a “corridor.” Indeed, Pakistan is counting on the CPEC to drive future growth.

For Pakistan, the CPEC is more than simply a “route” or a “corridor.” Indeed, Pakistan is counting on the CPEC to drive future growth. Nearly three times more than the estimated $12 billion cost of building the road and railway network will be required to develop the energy infrastructure envisioned under CPEC for the purpose of alleviating Pakistan’s chronic energy shortages.[7] In November, China announced an additional $8.5 billion investment in Pakistan to upgrade the country’s main railway line from Karachi to Peshawar and to support construction of a liquified natural gas (L.N.G.) terminal and transmission lines.[8]

Yet, notwithstanding the progress made on the ground, the CPEC has fuelled political controversy and infighting in Pakistan, with provincial leaders wrangling over the allocation of routes as well as the pace at which projects are being implemented. Furthermore, there remain many unanswered questions and apprehensions, including those related to the economic viability of many of the projects associated with the CPEC.[9] The International Monetary Fund’s (I.M.F.) June 2016 report on Pakistan noted that while the CPEC would likely succeed in boosting investment and growth in the short run, it would entail risks of repayment obligations and profit repatriation in the medium to long term.[10]

For China, the CPEC is viewed not simply as a trade-enhancing vehicle but as “an international effort to deliver security through economic development.”

Arguably the most important issues regarding the CPEC are those related to security. For China, the CPEC is viewed not simply as a trade-enhancing vehicle but as “an international effort to deliver security through economic development.”[11] Paradoxically, however, local terrorism and other nagging asymmetrical security threats — the very problems that this ambitious initiative seeks to ameliorate — pose serious risks for Chinese workers and companies engaged in project implementation and to the CPEC itself.

Building the corridor of roads, railways and pipelines from northwest China to Pakistan’s Arabian Sea coast is, and likely will remain exceedingly difficult in light of the attendant security risks. Pakistan’s security situation continues to be precarious despite the success of anti-terrorism operations. The CPEC passes through the restive province of Balochistan as well as through Gilgit-Baltistan and Pakistan-occupied Kashmir (PoK).

Balochistan occupies a central place in the CPEC project. Priority was given to construction of the western route through the province in an effort to persuade residents that they would not be excluded. Nevertheless, Baloch nationalists still consider the corridor as “an occupation of Baloch territory.”[12] Balochistan Liberation Front (BLF) spokesperson Jeehand Baloch referred to the CPEC as “the China-Pakistan nexus to loot Baloch resources.”[13] Likewise, BLF leader Allah Nazar Baloch called the CPEC an “imperialist scheme,” and vowed to target the corridor.[14] Similar threats have been issued in Sindh, where China has been portrayed by some as accomplices of the “Punjabi establishment.”[15]

In recent months, violence in Balochistan has surged.[16] The Frontier Works Organization, which is engaged in road-building projects, has suffered several dozen casualties.[17] Two Chinese engineers were killed in September.[18] On the very day that the truck convoy carrying Chinese cargo en route to Gwadar approached the Baloch capital of Quetta, a powerful bomb blast struck the Sufi Shah Noorani shrine in Khudzar district[19] — an attack that though not aimed at the CPEC is nonetheless a stark reminder of its vulnerability.

There is some evidence that the spike in violence in Balochistan has caused heightened concern in China. The official Chinese daily Global Times reported that, “the increasing cost of security is becoming a big problem in efficiently pushing forward the project.”[20] Pakistani officials have gone to extraordinary lengths to assuage their Chinese counterparts’ concerns. During the November inaugural Kashgar-Gwadar cargo run and subsequent transfer of the containers to the vessels awaiting them at the port, the Pakistan Navy deployed its ships and aircraft to provide security cover to ensure safe and secure transit.

To date, Pakistan has deployed nearly 15,000 security personnel to safeguard roughly 7,000 Chinese nationals working on the CPEC, most of whom are located in Punjab.[21] Hussain Sayed, who chairs the parliamentary committee on the CPEC, has recently stated that Pakistan plans to double the size of the Special Security Division (SSD) by the end of March 2017.[22] Chinese officials have publicly lauded the precautions that Pakistan has taken.[23] But deploying the SSD has been somewhat controversial in Pakistan, as civilian leaders have had strong reservations about the terms under which the army advises, guides, and ‘indirectly’ controls local law enforcement agencies.[24]

The success of the CPEC and the Gwadar Port project also depends on the safe and secure maritime environment in the Indian Ocean region in general, and in the Arabian Sea in particular.[25] Within the maritime domain, the challenges include piracy, human trafficking, and smuggling. These varied sources pose two types of threat. The first is the possibility that militant groups or insurgents might attack seaports and vessels. The second is through container shipments, which insurgents could use to smuggle weapons, drugs and conduct human trafficking operations to finance their activities.

Nearly all of Pakistan’s trade is through sea lines of communication (SLOC). It is therefore not surprising that Pakistani authorities regard the seaward security of the port and associated sea lanes a major vulnerability and, consequently, have have made maritime security a top priority.[26] Nor is it surprising that the role of Pakistan’s maritime forces has increased since Gwadar became operational. The Pakistan Navy has been assigned special responsibility to protect Gwadar seaport project from offshore threats and the more than 500 Chinese working there. In January 2016, the Navy decided to deploy two additional Marine Battalions to provide around the clock security at Gwadar.[27]

Pakistan’s efforts to bolster its maritime security capabilities are wide-ranging. They include the stepping up of security patrols and coastal exercises, which has been facilitated by the creation of Coastal Watch Stations and the Joint Maritime Information Coordination Centre (JMICC); the establishment of the Force Protection Battalion (FPBn) of the Pakistan Marines; and the enhancement of maritime domain awareness.[28] Additionally, Pakistan has sought to engage in more robust collaborative maritime security activities. Here, the relationship with China is noteworthy. The two allies appear fully committed to full-spectrum maritime security cooperation (i.e., the protection of ports, vessels, and seal lanes). The fourth joint naval exercise that took place in November, this time in the open sea, is illustrative of the widening ambit of China-Pakistan maritime collaboration.[29]

Chinese support for Pakistan’s efforts to bolster its maritime capabilities has greatly expanded ...

In fact, Chinese support for Pakistan’s efforts to bolster its maritime capabilities has greatly expanded from equipment, logistics and training support to technology transfer. Motivated partly by Pakistan’s difficulty procuring certain platforms from Western sources, China-Pakistan cooperation extends to joint in-country construction of the F-22P frigate; and production of Azmat and Jalalat class fast attack craft and corvettes for the Pakistan Maritime Security Agency. In June 2015, Pakistan’s Ministry of Defence Production signed a contract with M/s China Ship Trading Company (M/s CSTC) for construction of seven Maritime Patrol Ships, four of which are being built in China and the others at the Karachi Shipyard and Engineering Works.[30] The confirmation by the China Shipbuilding Industry Corporation (CSIC) of its involvement in a project to provide the Pakistan Navy with eight attack submarines marks yet another milestone in this cooperation.[31] During the recent visit of the People’s Liberation Army Navy (PLAN) chief to Pakistan, both navies agreed to widen the scope of existing maritime exercises in order to improve interoperability.[32]

The China-Pakistan Economic Corridor (CPEC) represents a new and exceedingly ambitious model of cooperation for these two all-weather partners. The realization of the many developmental and prospective benefits for each of the two countries depends upon the successful completion of the myriad projects designed to lay the infrastructural latticework for multifaceted bilateral economic cooperation and regional connectivity. The persistence of non-traditional security threats makes the progress that has already been achieved in developing this infrastructure within the relatively short span of time since its conceptualization all the more remarkable. Yet, given the extent to which terrorist and militant outfits have entrenched themselves in Pakistan, inoculating the CPEC against them seems unlikely.

To be sure, Pakistan has taken significant steps to develop and deploy — both on land and sea — the military assets deemed necessary to mitigate the risks associated with asymmetrical security threats to the CPEC. Indeed, China has supported these, and broader efforts by Pakistan to enhance its overall conventional military capabilities. However, increased China-Pakistan military cooperation is occurring against the backdrop of intensifying competition amongst the various regional states, including rising India-Pakistan tension and growing irritation between China and India. Thus, the very measures ostensibly aimed at tackling non-traditional security challenges could inadvertently heighten threat perceptions and fuel interstate rivalry, thereby accentuating the risks to the CPEC rather than ameliorating them.

[3] Currently, there are two main land-to-sea arteries under construction: one going south from Kunming, in China’s Yunnan province, through Myanmar to the coast, and the other (CPEC) cutting south from Xinjiang through Pakistan to Gwadar port on the Indian Ocean. For details on the One Belt, One Road (OBOR) initiative, see People’s Republic of China National Development and Reform Commission (NDRC), “Vision and Actions on Jointly Building Silk Road Economic Belt and 21st-Century Maritime Silk Road,” March 28, 2015, accessed November 28, 2016, http://en.ndrc.gov.cn/newsrelease/201503/t20150330_669367.html.