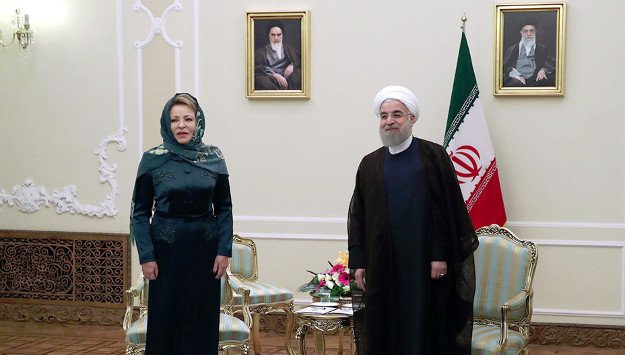 On November 14, Iranian and Russian news outlets reported that Tehran and Moscow had begun negotiating the supply of around $10 billion worth of arms and military hardware to Iran. The deal reportedly includes T-90 tanks, artillery, planes and helicopters.

“These negotiations are being carried out, the road has been paved. The order book, discussed today, reflects the needs of Tehran and amounts to some $10 billion,” the head of the defense and security committee in Russia’s upper house of parliament, Viktor Ozerov, told reporters during a parliamentary visit to Tehran.

In a meeting with her Iranian counterpart Ali Larijani in Tehran, Russian Federation Council Chairperson Valentina Matviyenko also stressed that a “convergence of interest” between Tehran and Moscow and the “good atmosphere created after the JCPOA [the Joint Comprehensive Plan of Action, or the 2015 Iran nuclear deal]” allow the two countries to expand bilateral ties and cooperate in the fight against international terrorism.

The news of a multi-billion-dollar arms deal comes after Russia completed the delivery of the long-delayed S-300 defense missile system to Iran last month. But while bilateral ties are warming up and the two countries are cooperating closely in Syria, many inside Iran remain skeptical about Russia’s sincerity.

Referring to Russia’s lengthy delay in the S300 sale to Iran, Heshmatollah Falahat-peshe, a lawmaker and a member of the Iranian parliament’s national security committee, told reformist Aftab-Yazd newspaper: “Relations between Iran and Russia are not defined as strategic. And this country [Russia] typically does not establish a strategic relationship with allied countries and acts on the basis of its interests.” He noted that the talks of a $10 billion arms deal were only at a preliminary stage and that the issue had not been debated at the parliament yet.

Nader Qazipour, another lawmaker from the Iranian city of Urmia, also cast doubt on Russia as a reliable partner. He said he opposed a bill being worked on at the parliament to promote investment and trade between the two countries because Russia acted in a “gangster fashion” in “its economic transactions” and that “illegal networks control Russia’s economy.” He cautioned that there was no guarantee Iran’s investment and money would not be lost. “How would we know the calamity Russia imposed on Turkey will not repeat itself with regard to Iran,” he warned.

Another article in reformist Donya-e Eqtesad, also expressed the worry that Russia might strike a deal with the administration of President-elect Donald Trump and betray Iran in Syria and elsewhere.