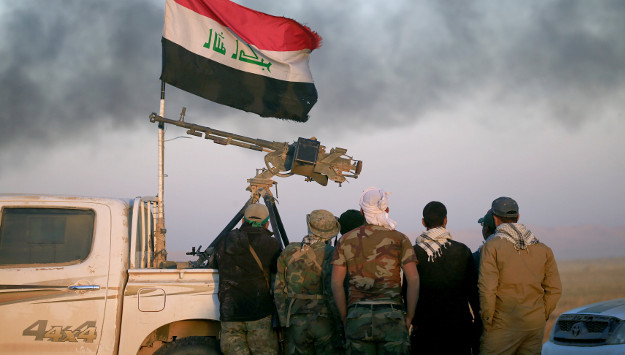 Despite repeated objections by some Iraqi Sunnis and regional Sunni states, the Popular Mobilization Forces (PMF) are continuing to play a major role in the battle of Mosul.

Tal Afar is a major Islamic State stronghold located about 40 miles west of Mosul and a conduit for the group’s supply lines to and from Syria. Last month, PMF forces seized Tal Afar military airbase, which is about 7 miles from the center of Tal Afar.

Once inhabited by both Sunnis and Shiites, Tal Afar’s population is now largely Sunni Turkmen. Some regional Sunni governments are concerned that Iran-backed militias might engage in revenge killings if they are allowed to enter the city. Turkey, in particular, has warned that it would not remain silent to the PMF’s advances into Tal Afar. Some observers say Turkey might use the PMF’s military gains as an excuse to deepen its involvement in Iraq. Sunni Iraqi lawmakers also express the worry that the Iraqi parliament’s decision to legalize the PMF as a government entity could stoke sectarian tension and increase Iran’s influence in Iraq.

The PMF is an umbrella of largely Shiite militant groups that have been instrumental in rolling back the Islamic State in Iraq. But some of its units have reportedly been engaged in revenge killings, kidnappings and other crimes against Iraqi Sunnis. While some factions such as Asaib Ahl al-Haq, the Badr Brigade and Kata'ib Hezbollah are closely linked with the IRGC, many are independent and follow the direction of Iraq’s Grand Ayatollah Ali Sistani.