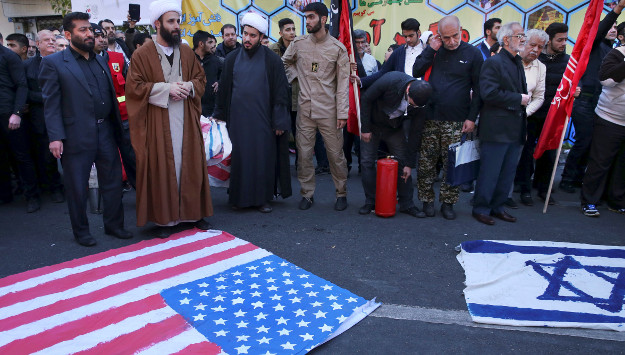 Tens of thousands of Iranians marched across Iran to mark the anniversary of the seizure of the US Embassy in Tehran following the Islamic Revolution in the country in 1979. (More details here, here and here.)

Thirty seven years ago on this day, Iranian militant students stormed the embassy and took 52 Americans hostage for 444 days after Washington refused to expel Iran’s deposed Shah Mohammad Reza Pahlavi. Since then, Iranian hardliners every year stage protest rallies to voice support for the Islamic Revolution and denounce the United States.

As in past years, the protesters chanted “Death to America,” “Death to Israel” and “No Compromise, No Surrender, Battle against America” slogans, and burned the American flag in front of the former US embassy compound, called by Iranian leaders “Den of Espionage.”

The anti-American march comes a day after Iran’s Supreme Leader Ali Khamenei said the US had reneged on the nuclear agreement, and urged the government not to pursue further compromise and dialogue with Washington.

The anti-American march and rhetoric in Iran are another grim reminder that the 2015 nuclear agreement has failed to usher in warmer relations between Iran and the United States. While hardliners failed to prevent the centrist government of President Hassan Rouhani from signing the deal, they have been trying hard to ensure the nuclear agreement does not lead to a broader rapprochement with Washington. And as Iran is gearing up for presidential election slated for next May, hardliners are expected to intensify efforts to discredit Rouhani at home and abroad – mainly by imprisoning pro-government and pro-reform activists, obstructing the president’s reform agenda, and pursuing anti-American policies in the region.