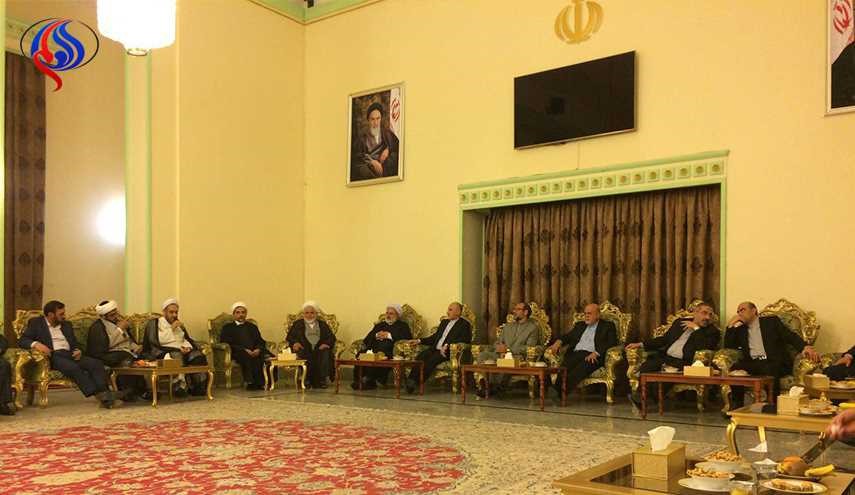 Iraj Masjedi, Tehran’s ambassador to Baghdad, held separate meetings with Iraqi President Fuad Masum and prominent Shiite leaders in the run-up to the Iraqi parliamentary elections slated for May 12, Iranian and Arab media outlets reported. In the meeting with the Iraqi president on Thursday, Masjedi stressed the need for closer economic ties between Iran and Iraq. The Iranian diplomat, who is also a senior member of Iran’s elite Quds Force, held a separate meeting with Ammar al-Hakim, a prominent Shiite politician and cleric who heads the National Alliance. According to the Iraqi media, Masjedi and Hakim discussed ways to further enhance bilateral ties between Iran and Iraq. Hakim, who recently set up a new political party, called Hikma (Wisdom Party), told the Iranian diplomat that Iraq can play an active role in fostering peace and stability in the region.

Comment: With the parliamentary vote in Iraq nearing, Masjedi, who has been involved in the Iraqi affairs since the 1980s as a Quds commander, has been meeting with Iraqi politicians and Shiite militia leaders on a regular basis. While Tehran has reached out to Sunni politicians at times too, its primary objective in the upcoming Iraqi elections is a resounding majority victory for a Shiite coalition friendly to the Islamic Republic. The Iranian press, particularly outlets affiliated with the Revolutionary Guards, has recently expressed the concern that a potential underperformance by the Shiites in the elections would undermine Iranian influence in the Arab country. Tehran is also worried that the United States and regional Sunni Arab countries may play a role in the elections to shape up the next Iraqi government at the expense of Iranian interests.

In late March, Masjedi also held meetings with the commanders of Iraqi militia groups to discuss their participation in the upcoming elections, and at the same time encourage them to continue fighting in Syria in support of the regime of Bashar al-Assad. In a meeting with Akram al-Kaabi, the leader of Harakat al-Nujaba, Masjedi praised Nujaba’s role in Syria and Iraq and emphasized that Tehran will continue to support its allies in Iraq.

All the three Iranian ambassadors in post-Saddam Iraq have been senior members of the IRGC’s elite Quds Force – reinforcing the notion that the IRGC, rather than the government in Tehran, is in charge of the Islamic Republic’s policies in regional countries. Masjidi a year ago replaced Hassan Danaeifar, who had served as Tehran’s ambassador to Baghdad for more than six years. Masjidi’s military role in Iraq dates back to the Iran-Iraq war in the 1980s, when he served as the chief of staff of the I.R.G.C.’s Ramazan Base outside the country under the leadership of IRGC commander Mohammad Bagher Zolghadr. The Quds Force operative then played a role in post-Saddam operations against US forces in Iraq.

Masjidi has also been a strong proponent of Iran’s assertive role in regional conflicts. “Aleppo, Fallujah and other regions in Syria and Iraq are the front line of the Islamic Resistance,” he said in June 2016.  In another speech last year, Masjedi claimed credit for organizing and supporting regional sectarian militiamen to fight Iran’s wars in the Middle East. “The front line for our combatants in the past [Iran-Iraq war] was Abadan and Khoramshahr and Mehran and Haj Imran; and now it is Mosul, Lebanon and Aleppo and Syria.” He further noted: “Today, the militants of Islam have stopped the enemy in other countries and with the help of popular forces in Iraq and Syria and regional mujahedin and armies such as Fatemiyoun [Afghan Shiite combatants], Zainabyoun [Pakistani Shiite militants] and Haidaryoun (Iraqi Shiite groups) within the framework of a great international power and alliance to fight against the Takfiri enemy.”

The appointment of Masjedi to Baghdad was an effort by the IRGC to further consolidate Iran’s influence in Iraq. With decades of experience in Iraq, Masjedi has the ability not only to bring Baghdad closer to Tehran diplomatically, but also to use IRGC’s decades-long links with Iran-supported Iraqi sectarian groups to make Baghdad a more pliant partner at the expense of Iraq’s stability and the interests of the United States and its regional allies. When Masjedi’s appointment was first announced, Atheel al-Nujaifi, the former governor of Iraq’s Nineveh Province, said the Quds Force commander’s role in Iraq will not be confined to diplomatic efforts, but that Masjedi’s military experience will elevate “Iran-Iraq relations to another level.”