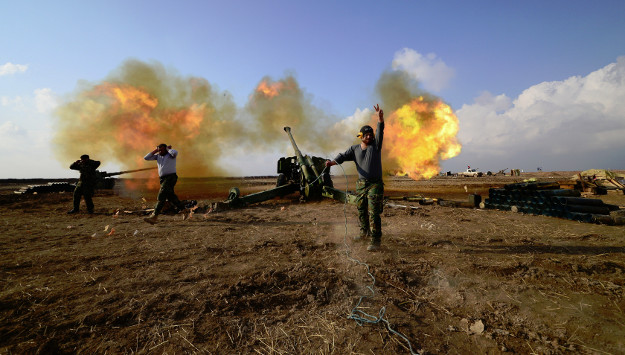 The Supreme Council of Syrian Tribes and Clans says Iranian-backed Iraqi militia groups enter Syria and commit “terrorist attacks” against the Syrian people, Arab media reported. Mudar Hammad al-Assaad, the council’s spokesman, called on the Baghdad government to stop Popular Mobilization Forces (PMF) fighters from penetrating into Syria and carrying out attacks against “unarmed civilians”. He stressed that the Iraqi PMF groups – similar to other Iranian-supported militiamen from Afghanistan and Lebanon – engage in acts of terrorism in Syria. “Radical organizations took religion as a cover and attracted the largest number of young people lured by emotion, and as a result, they committed horrific acts of massacre against the Syrian people to help the regime of Bashar al-Assad and implement Iran's plans in the Arab region through the export of the Islamic revolution,” he added. Assaad expressed the hope that Iraqi tribes and clans also take action to “prevent Hashd al-Shaabi [PMF] from entering into Syrian territory to defend the Assad regime and further Iran’s expansionist plans under the pretext of fighting terrorism.”

Comment: Since the start of the Syrian civil war seven years ago, Iran’s elite Revolutionary Guards has mobilized, funded, trained and deployed tens of thousands of Iraqi, Afghan, Pakistani and Lebanese Shiite militiamen to fight in Syria to prop up the embattled regime of Bashar al-Assad. While the Iraqi PMF, as an organization, has not taken part in the Syrian war, prominent groups within the PMF with close ties to the Revolutionary Guards have fought in Syria under the IRGC and Lebanese Hezbollah leadership for many years. Groups such as Asa’ib Ahl al-Haq and Harakat al-Nujaba deployed forces to Syria at a time when the fight against ISIS inside Iraq was still underway.

The concern by the Syrian Sunni tribes about the presence of Iranian-backed foreign militia groups is understandable as groups such as AAH and the Nujaba movement have fueled sectarianism in Syria and have committed violence against the Syrian people, particularly the Sunni community. Human Rights Watch and several other international organizations have extensively documented human rights abuses by Iranian-backed militia groups both in Iraq and Syria.

The Supreme Council of Syrian Tribes and Clans, established in Turkey in early 2017, consists of mainly Arab tribes from different regions of Syria. The council organized a general conference in Istanbul in December, in which representatives from more than 60 Syrian tribes and clans reportedly participated.