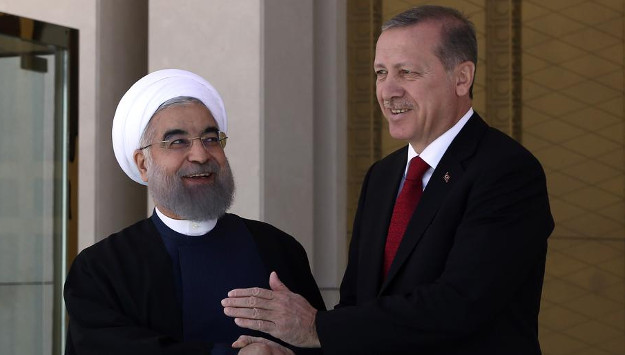 Iranian President Hassan Rouhani met with his Russian and Turkish counterparts today in Ankara for talks over the Syrian conflict. Speaking at the trilateral summit, the Iranian president blamed the United States and its allies for the Syrian crisis and called for the withdrawal of American troops from the Arab country. “The American government must answer the question as to what it is doing in Syria thousands of kilometers away from its territory. Who has invited American troops to come to Syria? America’s illegal presence and military intervention in in Syria are aimed at escalating tension and ultimately dividing this country,” Rouhani told the summit. He continued: “The Syrian people have emerged triumphant from the war on terrorism and will under no circumstances allow foreign powers to divide their country. They will resolutely confront this issue.”

Rouhani also lashed out at Israel. “On the other hand, the Zionist regime’s daily support for terrorists in Syria and its violation of the country’s sovereignty and territorial integrity have further complicated the crisis.”

The Iranian president stressed that Damascus and its Iranian and Russian allies would continue military operations against “terrorist” groups (Tehran calls most Syrian opposition forces including groups backed by Turkey terrorist). At the end of the trilateral summit, the three leaders issued a joint statement emphasizing that all foreign powers should respect Syria’s territorial integrity and seek ways to resolve the conflict through a negotiated settlement. They also reiterated their commitment to working together to reduce violence in the so-called de-confliction zones.

Rouhani also held bilateral meetings with his Russian and Turkish counterparts to discuss ways of boosting trade ties between their respective countries.

Separately, the foreign ministers of the three countries are also slated to hold a trilateral meeting in Turkey to discuss the Syrian conflict.

Tehran will host the next round of the trilateral summit between Iranian, Russian and Turkish leaders to discuss Syria.

Comment: Just hours before leaving for Ankara yesterday, Rouhani told reporters in Tehran that the trilateral meeting will primarily focus on the implementation of the de-escalation agreements by the three countries as well as Syria’s rebuilding process.

While the Iranian president emphasized that foreign powers should play no role in determining Syria’s future and allow the Syrian people to decide for themselves, he paradoxically pointed out that the Ankara meeting will also discuss drafting a new constitution for the war-ravaged country.

In addition, although Tehran, Moscow and Ankara all have troops inside Syria, Rouhani lashed out at the presence of American forces in Syria.

While Iran and Russia have been cooperating closely to support the embattled regime of Bashar al-Assad in recent years, Turkey has been supporting the opposing side of the conflict. Recently, however, Tehran and Ankara, with Russian mediation, have taken steps to narrow their differences in Syria and accommodate each other’s interests and concerns to a certain extent.

The main concern for Ankara appears to be the presence of the US-backed Kurdish People’s Protection Units (YPG) close to its border with Syria. Having failed to convince Washington to halt its support for the Kurdish forces in Syria, Ankara has sought to cooperate more with Russia and Iran to address its concerns in Syria and has launched a military invasion of the Kurdish-held Afrin region in northwestern Syria.

While YPG is a main US ally in the fight against the Islamic State and al-Qaeda affiliates in Syria, the Turkish government considers it a terrorist organization and an offshoot of the Kurdistan Workers Party (PKK), which has fought a violent insurgency against Turkey over the past three decades. Turkey has also suffered from the influx of the Syrian refugees.

Tehran, Ankara and Moscow are the guarantors of a trilateral mechanism that is ostensibly aimed at de-escalating violence in Syria. But despite the de-escalation agreements, violence by pro-Assad forces in Syria still rages on. Hundreds of civilians were killed in air raids and ground offensives by the Syrian Army and Iranian-backed forces in Eastern Ghouta in February and March. Indeed, Rouhani pointed out today that the Syrian Army and Iranian-backed forces will continue military operations against “terrorist” groups.

Therefore, the Ankara summit is unlikely to significantly reduce violence in the short term and resolve the conflict in the long term. Fundamental divergence of policies and interests between the three ostensible allies will continue to hinder efforts to stabilize Syria. Furthermore, the Ankara summit is not addressing underlying political and demographic issues that started the Syrian conflict at the first place.

One issue that Iran, Russia and Turkey all agree about on Syria is that American forces should leave the country. With the near-collapse of ISIS, Tehran sees the presence of American forces in Syria as the greatest threat to its influence in Syria and the broader region. Iranian-backed militia forces in recent months have taken provocative actions against the US-backed forces in southeastern Syria. And the trilateral summit of Iran, Turkey and Russia also attempts to diplomatically isolate the United States and its allies and function as the main platform to decide Syria’s future.