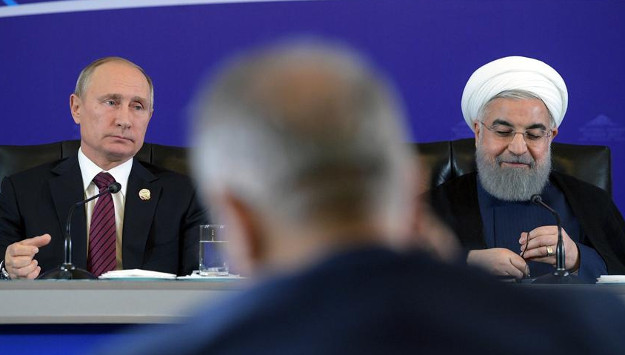 The presidents of Iran, Russia and Turkey will hold a trilateral meeting on Syria next week. According to officials of the three countries, the summit will focus on efforts to de-escalate the war in Syria, facilitate delivery of aid to affected regions, and promote political dialogue between Damascus and moderate opposition forces. Vladimir Putin will host his Iranian and Turkish counterparts Hassan Rouhani and Recep Tayyip Erdogan at his residence on November 22.

Separately, Iranian Deputy Foreign Minister Hossein Jaberi Ansari also traveled to Moscow and Damascus to discuss the latest security and political developments in Syria. The two sides emphasized that Tehran and Damascus should continue close coordination in fighting terrorism in Syria and the broader region.

Comment: While the three leaders claim they are meeting in Russia to discuss ways to de-escalate violence in Syria, Russian bombers and Syrian and Iranian-led forces have stepped up military operations not only in the eastern province of Deir Ezzor, but also in areas near Damascus that are technically part of previously-agreed de-escalation zones.

The trilateral summit also comes at a sensitive time. Ankara has recently threatened to launch an attack against U.S.-backed Syrian Democratic Forces (S.D.F.), and Tehran and Damascus have also warned that the Syrian government should take control of all of the country’s territory, including Raqqa. Moreover, Iran and its militia proxies in Syria are threatening to fight U.S. troops if they do not leave Syria after the fight against ISIS is over.

Despite Presidents Trump and Putin agreement to work on de-escalation efforts in Syria, tension between Moscow and Washington over Syria is escalating as well. U.S. Secretary of Defense Jim Mattis said earlier this week that U.S. forces will remain in Syria to ensure ISIS cannot remerge and to facilitate a political transition of power in Syria. Russian, Syrian and Iranian officials, on the other hand, have dialed up rhetoric branding the American military as “occupying forces” and accusing it of aiding terrorists.