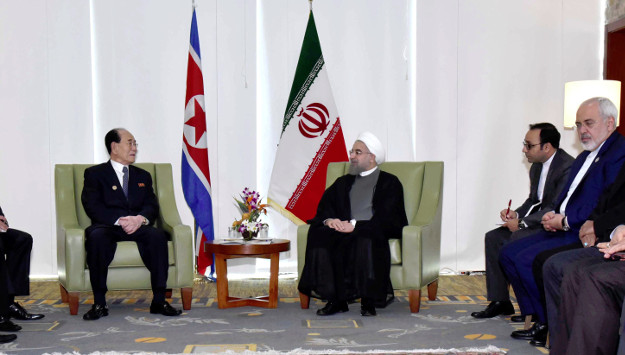 Iranian and North Korean officials have discussed ways to strengthen bilateral ties and jointly “resist” the United States and its allies, the Iranian media reports. “Iran and North Korea are at a united front against interferences and bullying by America and its allies, and they resist different kinds of pressures and sanctions imposed by the West on both countries,” Alaeddin Boroujerdi, the Chairman of the Iranian Parliament's National Security and Foreign Policy Commission, told North Korea’s ambassador to Tehran, Kang Sam Hyon, earlier today.

In the meeting, Boroujerdi, who is also the head of the parliamentary friendship group of Iran and North Korea, urged that officials of the two countries, including lawmakers, should meet more often to discuss issues of mutual concern and strengthen ties.

The Korean diplomat, according to the Iranian media, said that expanding ties with Tehran in the political, economic and defense arenas was among Pyongyang’s top priorities, and added: “America is the source of instability and insecurity in different parts of the world, and North Korea backs Iran’s positions to oppose America’s bullying and imperialistic interferences.”

Cooperation between Tehran and Pyongyang, especially in the military field, has been a matter of concern for Washington and its allies for a long time. A Congressional Research Service report last year said that Iran “has developed a close working relationship with North Korea on many ballistic missile programs.”

The news also comes at a time when US officials are increasingly worried about Iranian and North Korean ballistic missile programs. Shortly after Donald Trump took the oath of office, the White House website released a policy statement – titled “Making Our Military Strong Again” – which stated that the administration will “develop a state-of-the-art missile defense system to protect against missile-based attacks from states like Iran and North Korea.”