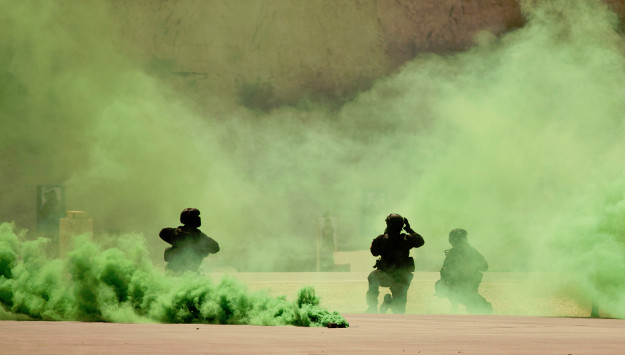 Iranian-supported Shiite militia forces in Iraq and Syria have finally linked up along the shared border between the two countries, Fars News Agency reports. “Six days after Syrian and resistance forces managed to reach Syria’s southern border with Iraq, Iraqi forces also succeeded to reach the border in the south,” said the outlet, which is affiliated with the Islamic Revolution Guards Corps (I.R.G.C.).

According to the U.K.-based Syrian Observatory for Human Rights, the P.M.F. incursion into Syria occurred without a permission from Baghdad. “The PMF deliberately attacks ISIS areas south of al-Hasaka and at the northeastern border of Deir Ezzor, trying to advance towards the northeast of al-Tanf to meet with Hezbollah and al-Nujaba militias coming from the Homs desert,” the rights group said.

Comment: The news is another victory for Iran and its proxies that aim to establish control over land routes between Iran, Iraq, Syria and Lebanon. The border area where Iran-backed forces have managed to link up is not far from a military base used by the U.S. military and its allies to train Syrian rebel forces for the fight against the Islamic State. Other than securing a supply line between Syria and Iraq, the control of the border region also allows the Syrian Army and Iranian-controlled militia forces to deny U.S.-backed Syrian rebel groups in the south from moving to the north. Tehran and Damascus are trying to seize areas around al-Tanf in order to render that region strategically ineffective.

The U.S. military has recently conducted three air strikes against pro-Syrian government forces approaching the de-confliction zone near al-Tanf. But despite the warnings, Iranian-controlled Afghan and Iraqi Shiite militia groups fighting in Syria six days ago managed to bypass the U.S.-controlled region in southern Syria and reach the Iraqi border.  “After extensive efforts, the Fatemiyoun [Afghan] forces and their allies in the resistance axis succeeded two days ago to overcome the obstacle of American air strikes and reach the Iraqi-Syrian border,” Tasnim News Agency reported. The I.R.G.C. outlet also published photographs of Iranian Quds Force Commander Qassem Soleimani celebrating the victory with the Afghan forces close to the shared border. It also warned that a dangerous confrontation with the U.S. military and its allies in southeastern Syria was forthcoming.

U.S. troops based in Syria's southeastern desert have reportedly expanded their footprint in recent weeks.

Iranian-backed Iraqi paramilitary forces have also reached the Syrian border in northwestern Iraq after capturing the two of al-Ba’aj . Tehran hopes that its proxies in Syria with the help of the Syrian Army will ultimately reach the Iraqi border in the northeast as well.