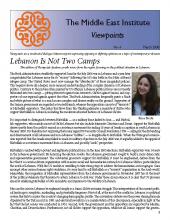 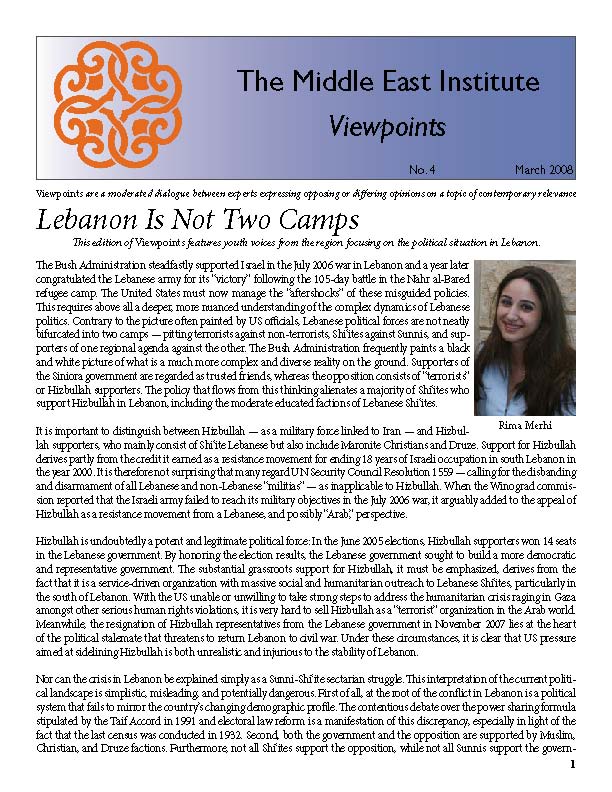 The Bush Administration steadfastly supported Israel in the July 2006 war in Lebanon and a year later congratulated the Lebanese army for its “victory” following the 105-day battle in the Nahr al-Bared refugee camp. The United States must now manage the “aftershocks” of these misguided policies. This requires above all a deeper, more nuanced understanding of the complex dynamics of Lebanese politics. Contrary to the picture often painted by US officials, Lebanese political forces are not neatly bifurcated into two camps — pitting terrorists against non-terrorists, Shi‘ites against Sunnis, and supporters of one regional agenda against the other. The Bush Administration frequently paints a black and white picture of what is a much more complex and diverse reality on the ground. Supporters of the Siniora government are regarded as trusted friends, whereas the opposition consists of “terrorists” or Hizbullah supporters. The policy that flows from this thinking alienates a majority of Shi‘ites who support Hizbullah in Lebanon, including the moderate educated factions of Lebanese Shi‘ites.

It is important to distinguish between Hizbullah — as a military force linked to Iran — and Hizbullah supporters, who mainly consist of Shi‘ite Lebanese but also include Maronite Christians and Druze. Support for Hizbullah derives partly from the credit it earned as a resistance movement for ending 18 years of Israeli occupation in south Lebanon in the year 2000. It is therefore not surprising that many regard UN Security Council Resolution 1559 — calling for the disbanding and disarmament of all Lebanese and non-Lebanese “militias” — as inapplicable to Hizbullah. When the Winograd commission reported that the Israeli army failed to reach its military objectives in the July 2006 war, it arguably added to the appeal of Hizbullah as a resistance movement from a Lebanese, and possibly “Arab,” perspective.

Hizbullah is undoubtedly a potent and legitimate political force: In the June 2005 elections, Hizbullah supporters won 14 seats in the Lebanese government. By honoring the election results, the Lebanese government sought to build a more democratic and representative government. The substantial grassroots support for Hizbullah, it must be emphasized, derives from the fact that it is a service-driven organization with massive social and humanitarian outreach to Lebanese Shi‘ites, particularly in the south of Lebanon. With the US unable or unwilling to take strong steps to address the humanitarian crisis raging in Gaza amongst other serious human rights violations, it is very hard to sell Hizbullah as a “terrorist” organization in the Arab world. Meanwhile, the resignation of Hizbullah representatives from the Lebanese government in November 2007 lies at the heart of the political stalemate that threatens to return Lebanon to civil war. Under these circumstances, it is clear that US pressure aimed at sidelining Hizbullah is both unrealistic and injurious to the stability of Lebanon.

Nor can the crisis in Lebanon be explained simply as a Sunni-Shi‘ite sectarian struggle. This interpretation of the current political landscape is simplistic, misleading, and potentially dangerous. First of all, at the root of the conflict in Lebanon is a political system that fails to mirror the country’s changing demographic profile. The contentious debate over the power sharing formula stipulated by the Taif Accord in 1991 and electoral law reform is a manifestation of this discrepancy, especially in light of the fact that the last census was conducted in 1932. Second, both the government and the opposition are supported by Muslim, Christian, and Druze factions. Furthermore, not all Shi‘ites support the opposition, while not all Sunnis support the government. Third, as confirmed by recent student elections, there is a growing number of Lebanese “Independents,” who refuse to endorse the government or the opposition, and call for moderation, reform, and an end to rising sectarian tensions. Fourth, a significant number of Lebanese are only nominally affiliated with the government or the opposition due to social pressure, family affiliation, personal interests, or religious background. Lebanese officials cannot afford to portray the political crisis as part of a wider regional Sunni-Shi‘ite struggle, lest this mortgage the country’s future to the conflicting agendas of regional powers and the ill-advised grand strategy of the present US administration.

Many Lebanese Independents are generally weary of extremists on both sides. They recognize that the majority of March 8 supporters do not oppose the March 14 agenda, but rather they mistrust their alignment with the United States in light of its failing policy in the region. By the same token, March 14 supporters look with suspicion and fear at the opposition’s alleged alliance with Iran and Syria. The March 8 and March 14 camps actually agree on many fundamental points. Both seek an end to an era of impunity that must begin with a fair and independent international tribunal that secures justice. Both want to shield Lebanese sovereignty and independence from foreign interference. Both are equally susceptible to the threat of an attack from Israel, and would have suffered even worse repercussions had Hizbullah not defended Lebanese soil in July 2006. Both parties will suffer dire consequences if the political deadlock flares into a full-fledged civil war. And both have an interest in self-regulating their respective media outlets, lest this exacerbate political and sectarian tensions. Thus, the depiction of the Lebanese political arena as divided into two irreconcilable camps, each firmly allied to a foreign patron, is a gross distortion.

Although the Lebanese people and their representatives in government are primarily responsible for the deadlock, no one would dispute the strong influence of the US on the region. At the heart of the presidential crisis is a competent and credible judicial system that is undermined by Lebanese political culture. By developing an independent judicial system, judges and specialists (not politicians) would interpret the binding principles of the Lebanese constitution, and provide legal and expert advice to resolve disputes, particularly regarding the details of the international tribunal. To break the deadlock, parliament doors need to open for real dialogue, with the genuine intent of electing a president after four months of delays, whilst putting an immediate end to the futile opposition demonstration that has crippled the most commercial heart of Beirut for more than a year.

The United States needs to communicate respect for the Lebanese version of democracy — one that clearly needs to integrate Hizbullah supporters into mainstream politics, whilst internally managing the arms of Hizbullah within the context of a medium to long term defense strategy that gradually empowers the Lebanese army — not US warships — to protect Lebanese soil. The US administration and particularly the Lebanese cannot afford to ignore the lessons from Iraq, and clearly need to develop policies to effectively integrate Shi‘ites into mainstream politics. Without adopting measures to reform electoral laws according to a new census, foreign powers will continue to exploit the situation and pressure the Lebanese government — despite national consensus to the contrary — to settle a largely Sunni Palestinian population in Lebanon.

Despite many differences among the Lebanese, Lebanon’s sovereignty and independence remains sacred for all. March 8 and March 14 leaders continue to enjoy widespread support and legitimacy from their followers, but need to better appreciate the dynamics of the region and employ tactful diplomacy to further consolidate and unify their support bases at home. The rise of Independent voices, too, is encouraging — these voices serve as a potential force for leveraging these common interests in ways that nudge Lebanon towards a political accommodation. The US administration can either persist in sharpening divisions within Lebanon, or display a keener appreciation of them and exercise restraint.