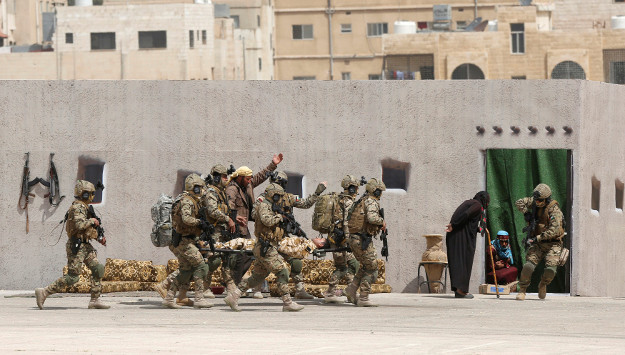 Read the full analysis, co-authored by Hardin Lang and Alia Awadallah, on the Center for American Progress.

The United States has no closer Arab counterterrorism partner than the Hashemite Kingdom of Jordan. Military and intelligence relations between the two countries date back to the 1950s. In recent decades, the two countries have worked closely to address shared security threats, shore up Jordan’s stability, and strengthen the kingdom’s capacity to confront terrorism at home. The wars in Afghanistan, Iraq, and Syria all strengthened these bonds, but the rise of the Islamic State group (IS) in 2014 saw bilateral security cooperation enter a new and even deeper phase of cooperation.

Today, Jordan is a key member of the anti-IS coalition. The kingdom hosts more than 2,800 U.S. military personnel; has supported train and equip efforts in southern Syria; and provides critical bases for the air campaign against the group. For its part, the United States has significantly increased not just its security assistance, but also its economic support and humanitarian aid to help Jordan shoulder new burdens imposed by regional turmoil, including the influx of nearly 700,000 refugees from Syria. By 2016, U.S. assistance had reached almost $1.6 billion annually.

Despite record aid levels, the internal security situation in Jordan took a turn for the worse in 2016. In that year, the kingdom suffered a string of terrorist attacks, including its most deadly in a decade. A number of factors appear to be at play. Civil war, IS, and a resurgent Al Qaeda in Syria have increased the threat along Jordan’s northern and eastern land borders. Domestic religious extremism also appears to be on the rise in Jordan. In addition, an estimated 2,000 to 4,000 Jordanians have crossed those borders to fight for extremist groups and many have begun to return home, elevating the threat of domestic attacks. Finally, Iran’s presence and power projection in Syria poses a strategic threat by creating instability and conflict along Jordan’s borders.

These trends do not yet constitute a strategic threat to Jordan’s stability. However, the recent spate of internal terrorist attacks has raised concerns over the kingdom’s capacity to fully manage a dynamic and complicated matrix of threats emanating from inside and outside Jordan. As the region enters a new chapter in the fight against terrorism, the United States and Jordan will need to make important choices about how best to further strengthen the capacity of the kingdom to manage these threats. The first step should be an honest look at what has and has not worked, particularly in the wake of the 9/11 attacks, after which the United States made significant investments in counterterrorism partners in the Middle East.