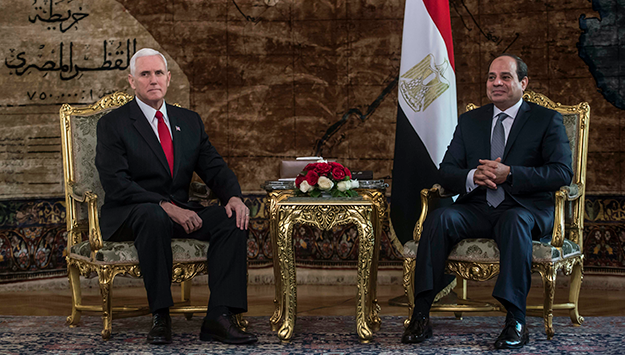 With the lights off in the federal government, global approval of the U.S. down from 48 to 30 percent, and the peace process dead after President Donald Trump’s unilateral Jerusalem announcement, Vice President Mike Pence trudged through a previously postponed visit to Egypt, Jordan, and Israel. Trump’s Jerusalem decision plays to Pence’s own evangelical base, and the vice president seemed happy to ignore the decision’s strategic and national interest repercussions.

Previous U.S. diplomacy in this corner of the region—whether by U.S. vice presidents or by secretaries of state—used to at least aim at some positive outcome in the peace process and some semblance of America’s role as a strategic mediator; Pence’s trip has the air of a condolence visit in the cases of Cairo and Amman and a victory party in Jerusalem.

His meetings in Cairo and Amman were strained but cordial, with both sides confirming that they “agree to disagree” on Jerusalem. In Jerusalem, he was given a hero’s welcome by Prime Minister Benjamin Netanyahu and his right-wing government. Pence refused to meet with the Israeli opposition, and Arab-Israeli parliamentarians interrupted his Knesset speech in protest. Palestinian President Mahmoud Abbas refused to meet with the American leader. Pence used the occasion to announce that the U.S. embassy would be moved to Jerusalem in 2019.

Whether Trump is a one- or two-term president, it is going to take a lot of work for the U.S. to rebuild its credibility as a partner for peace in this part of the Middle East.

The Turkish assault on Afrin in northern Syrian demonstrates the difficulties of the American position in Syria. Secretary of Defense James Mattis downplayed the strain in U.S.-Turkish relations to the press. Washington says that Afrin, which lies well west of the Euphrates, is not an area it would contest, but the Turkish brush-off of American advice made America look weak.

Turkey instead turned to Russia and secured its agreement to redeploy the small Russian force in Afrin to facilitate Turkish operations. The Russians are not confronting Turkish aircraft operating over Afrin even though Russia controls that airspace. Russia wants Syrian government control reestablished throughout Syria, including Afrin. Turkey prefers Syrian government control to autonomous Syrian Kurdish governance, and in northern Syria at least there is an outline of a Russian-Turkish alignment. Meanwhile, many Kurdish observers accuse the Americans of being unreliable allies and are reconsidering how they could secure greater help from Russia.

Over the longer term, it is hard to see how the U.S. will secure its stated political goal of stabilization in eastern Syria and genuine governance reforms in Syria. The U.S. hopes that Russia could and would exert unprecedented pressure on Syria and its Iranian backers to reach a political deal acceptable to America’s Syrian Kurdish and Syrian Arab allies in eastern Syria. Russia’s attitude in Afrin is not encouraging. Without that political deal, a regionally isolated U.S. will have either to entrench with its local allies in eastern Syria over the long term, parrying off the unconventional attacks that will come, or quit eastern Syria altogether.

The debate about postponing the Iraqi elections scheduled for May 12 is over. The Iraqi Federal Supreme Court issued its ruling yesterday, finding the Iraqi Council of Representatives’ move to delay the elections unconstitutional. Discussions are underway among some political groups about delinking the parliamentary and provincial elections, keeping the former on time but delaying the latter.

Electoral coalitions are starting to shape up. The trend among Iraqi political elites is to form cross-sectarian and cross-ideological electoral alliances, partly to curry favor with a large segment of the Iraqi population—2 million of whom are new voters—that has expressed through demonstrations and civil action its unwillingness to accept the sectarianism, corruption, inefficiency, and lack of accountability that has prevailed in Iraqi politics since 2003. The defeat of ISIS has shifted voters’ priorities, leading parties to emphasize security and terrorism-related issues less and focus on reconstruction, service delivery, and economic development more.

All the political parties that have dominated Iraqi elections since 2005 suffer from internal divisions. This creates space for new political parties—like the PMU-affiliated Fatah Alliance, or Kurdish parties that are challenging the KDP-PUK duopoly—to enter the political arena. Riding a wave of popular support as a result of the win against ISIS, Prime Minister Haider al-Abadi is the man to beat. The decision by the Dawa party not to contest the elections on a single list under the leadership of former Prime Minister Nouri al-Maliki weakened his chances of returning to the prime ministry. Instead, Maliki’s electoral strategy will be focused on denying Abadi a pathway to the prime minister’s office.

This week, the U.N. is launching its humanitarian response plan to the ongoing crisis in Libya. U.N. Special Representative for Libya Ghassan Salame says it will focus on providing housing and food as well as speeding the demining process. Such actions are absolutely essential for the recovery of Sirte and areas devastated by ISIS and the fighting that drove the terrorists out.

Much of the country still needs help. An estimated 1.3 million people are exposed to physical harm and human rights violations and in need of life-saving medical care and essential medicines. Half a million Libyans require shelter, as well as another 400,000 migrants.

While outsiders can help Libya’s humanitarian crisis, for meaningful progress overall Libyans need to approve a constitution through a popular referendum to end the current transitional stage of government and move beyond the ongoing political infighting over power.

Amid the stalling, voter registration efforts by the High National Elections Commission have moved forward, making it possible—in theory—for elections to take place by the end of this year.

To weaken spoilers, friends of Libya need to continue to prevent diversions of Libyan oil or funds to would-be power brokers. Libyans need to be reminded consistently that the only way of “winning” Libya’s resources is by winning elections and forming an inclusive government capable of delivering essential services to the Libyan people.

Support for the humanitarian plan this week is critical. Support for making national and local elections a reality is at least that important, too.