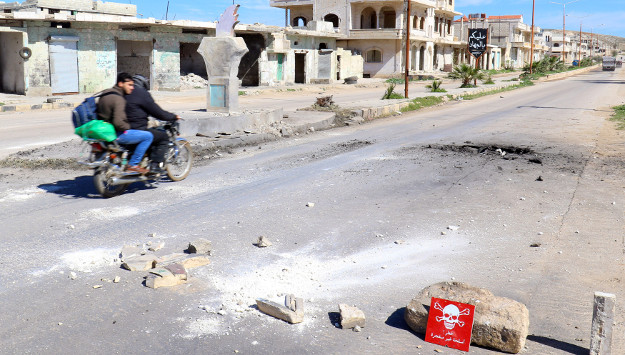 In recent days, U.S. and allied intelligence detected a possible resumption of chemical weapons-related activities in Syria’s Shayrat airbase in northern Hama province, which the United States bombed in April in response to a chemical attack on the town of Khan Sheikhoun emanating from the base. This latest intelligence is thought to have included the detection of enhanced levels of military preparations under the base’s remaining hardened hangars, and communications intercepts linked to the Syrian Scientific Studies and Research Center and its “Branch 450,” which is responsible for chemical weapons preparation and deployment.

That the Trump administration chose to use this intelligence publicly to warn the Assad regime of “a heavy price” should it again use chemical weapons is significant in and of itself—the red line drawn in April by 59 Tomahawk cruise missiles just got a little thicker. That U.S. ambassador to the U.N., Nikki Haley, followed up with a public warning that “any further attacks” would also be blamed on Iran and Russia indicates an attempt by some within the Trump administration to strengthen a sense of deterrence. It also asserts U.S. power within Syria’s increasing complex and tense dynamic.

This new warning also underlines the extent to which the U.S. government and its allies are fully aware of the Assad regime’s active chemical weapons capability, despite Syria claiming to have had its stockpiles destroyed through a diplomatic deal in 2013-14. In fact, it has been known for years, but rarely acknowledged, that Bashar al-Assad secretly retained as much as 15 percent of his chemical weapons stockpile.

Nevertheless, limited punitive strikes and strong public statements are not enough to deter a regime that has killed hundreds of thousands of its own people, and they remain insufficient to ward off Russia and Iran, which have more to gain and lose in Syria than the United States. There is also substantial opposition within the Trump administration to the prospect of entering into conflict with the Syrian regime, particularly within the Defense Department, which wants only to combat ISIS. Such short-termism, however, still ignores the simple fact that ISIS and other terrorist groups are merely symptoms of the Syrian crisis—the principal root cause of which is the Assad regime itself, and its unrestrained brutality.

If the Trump administration is determined to push back against Assad and his Russian and Iranian backers, a holistic, credible and publicly declared strategy is required. So-called “strategic ambiguity” works only when one is facing a potentially restrained adversary, which Assad is certainly not. The Obama administration chose a policy of limited containment in Syria, which determinedly failed and eventually forced it into fighting a war within a war, against ISIS. Such short-termism brought with it only minimal risk, until recently. Now, the U.S.-led anti-ISIS mission finds itself repeatedly firing on pro-Assad forces, Iranian drones and Syrian jets. Ironically, President Barack Obama’s aversion to risk has set up an inevitable series of risks for his successor, out of which the United States can either back down as the weaker actor, or stand up and enter into an escalatory cycle beyond the war with ISIS.