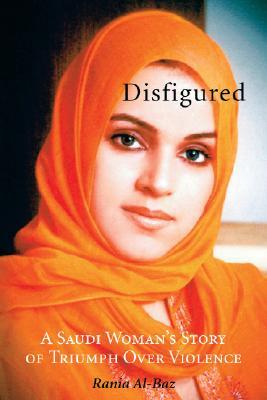 The issue of gender roles in the Middle East has been widely contested for decades. The Western viewpoint is all too quick to assume that women in the Middle East would like to emulate Western women in dress or manner and that anything short of that is oppression. However, in reality most Middle Eastern women value their religious practices and cultural intricacies as an integral part of their identity. They don’t see separating from their cultural or religious identity as mutually exclusive with expressing their personal freedoms, but rather aspire for a reconciliation of the two.

The book Disfigured addresses this delicate line separating women’s advocacy and cultural traditions in the telling of Rania al-Baz’s personal experience with domestic abuse.  Baz was acclaimed throughout Saudi Arabia as a beautiful and accredited news anchor on a popular television program. Most notably, she was the first woman in the country to hold such a job, making her a crucial figure in her society. Her beating by her husband worked Saudi society into an uproar over the mistreatment of such a beloved and well-known figure. Following her attack, she bravely allowed pictures of her disfigured face to go public and became a worldwide advocate for domestic abuse on behalf of women. While her autobiography explores the difficulties that women often face in her country, she reiterates time and time again that she remains loyal to her country and her religion.

Baz’s fight is similar to that of many women in the Middle East. It is not a fight to cast off their culture or religion but instead one against those who abuse these institutions to solidify their own authority or power. She points out that while the struggle for women is still very much real, her country and others in the Middle East have been taking important steps towards reform.

One example she mentions in her book is the changing status of education in Saudi Arabia compared to that of earlier decades. Prior to the 1970s, girls were rarely formally educated in Saudi Arabia; however, King Faisal used his rule to encourage education reform and the acceptance of girls attending school. Today, almost forty years later,  58 percent of university students in Saudi Arabia are female. Beyond education, recent years have seen the expansion of employment opportunities for females within the Ministry of Labor. Examples include the allowance of the first female lawyers to practice in court and the first females to be appointed to the Shura Council of the king’s advisories. The 2012 Olympics in London welcomed its first Saudi female athletes, demonstrating to the world that the country was progressing. Baz’s campaign itself has seen measurable effects as Saudi Arabia has passed legislation officially outlawing domestic abuse and increasing measures to prevent and treat such cases throughout the country.

While reform has been progressing slowly but surely in Saudi Arabia, Disfigured is a crucial reminder that many women still face a daily struggle to reach their full potential under patriarchal systems. However despite these struggles, women like Rania al-Baz continue to inspire and educate others on the importance of women’s issues as well as cultural understanding within these struggles.

Disfigured is an important firsthand account of domestic abuse and women’s issues in Saudi Arabia. Furthermore, her story resulted in unprecedented feedback from both Saudis and the international community due to her position as public figure which ultimately garnered more attention for her particular situation than other women in the past. Her writings intricately balance her pride and loyalty to her culture while discussing the struggles she faced as a woman throughout her life, giving a credibility to her account and her opinions on women’s issues. This literature is an important addition to studies on gender roles in the Middle East and women in Saudi Arabia.

Gender Roles in the Middle East

Karin Werner, Between Westernization and the Veil (Bielefeld: transcript, 1997)