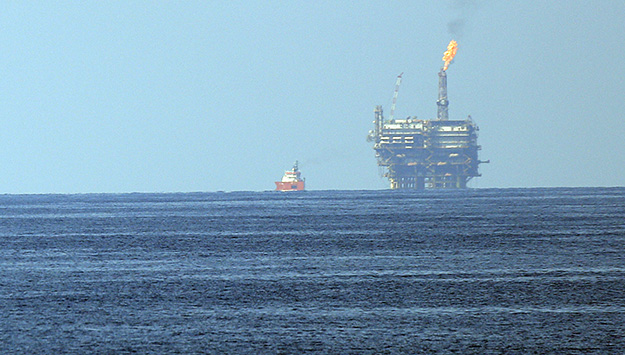 Italian energy company Eni announced on August 30 that it had discovered a deep-water gas field 93 miles north of Egypt’s Mediterranean coast.[1] The field, named Zohr, holds an estimated 30 trillion cubic feet (cft)[2] of natural gas (NG) reserves, potentially making it the twentieth largest in the world and the largest in the Mediterranean.

Until the Zohr discovery, Egypt had an estimated 64.8 trillion cft of natural gas reserves sitting primarily in the Mediterranean Sea, the Nile Delta, and its western desert, making it a medium-sized player in the natural gas market.[3] However, the Egyptian national oil and gas companies (EGPC and EGAS, respectively), formerly net exporters of hydrocarbons, have recently struggled to meet the country’s internal demand, even resorting to importing natural gas. While Eni’s new discovery is unlikely to translate into exports for some time, it does have the potential to alleviate the gap between supply and demand. Nonetheless, it does not do so without risks for both Eni and Egypt.

Egypt’s transformation from exporter to importer was not only predictable; it was largely avoidable. Until recently, the government’s firm ceiling price for purchasing natural gas from foreign operators, standing at $2.65/million British thermal units (MMBtu), was well below global standards.[4] With many of Egypt’s reserves being deep-water finds in the Mediterranean basin, the government’s price ceiling made monetization commercially unviable, as steep deep-water production costs coupled with low government purchase prices left unattractive profit margins for foreign energy companies.. Coupling this with Egypt’s state of instability since 2011, many foreign firms viewed investment in Egypt as a non-starter. Indeed, even though production in existing wells started to decline in 2010, no new exploration contracts were signed between 2011 and 2013.[5]  By 2015, production had fallen to 4.8 billion cubic feet per day (bcf/d), a contraction of 13.1 percent from 2014 and 22.3 percent since 2009.[6]

Simultaneously, Egypt’s natural gas consumption has increased. Even though demand growth, encouraged by low subsidized energy prices and a growing population, averaged 6 percent per year between 2005 and 2010, supply growth helped offset any energy deficit issues—until production started to decline.[7] Hence, while government repricing initiatives and subsidy reforms early on might have slowed the growing imbalance of supply and demand, Egypt’s post-revolutionary governments did not adequately act before gas deficits crippled Egypt’s economy. In the fiscal year 2014-2015, Egypt’s natural gas deficit amounted to nearly 1 bcf/d, and this is expected to grow to 2.5 bcf/d by fiscal year 2017-2018.[8] The growing deficit, coupled with Egypt’s dependence on natural gas for electricity generation, not only turned net exports into net imports, but also led to power shortages across Egypt, most notably in heavy industries such as steel and cement.[9] Until Eni’s Zohr discovery, these developments painted a stark picture for Egypt’s future.

Eni’s discovery could potentially change Egypt’s energy fortunes. While Eni does plan to utilize Egypt’s existing natural gas infrastructure to fast track production, no new gas will reach consumers for at least three years. Moreover, Eni’s find will come at a great cost to Egypt. First, total investment costs, which are likely to run up to $7 billion, will be borne by Eni but ultimately paid by Egypt.[10] Second, production will require Eni to drill 4,300 meters at a depth of 1,450 meters below sea level, a very expensive endeavor.[11] Nonetheless, if pursued correctly, the Zohr field discovery could be the best economic news Egypt has received in years, allowing for resumed industrial growth and potential energy self-sufficiency—that is, unless Eni intends to take its share of production elsewhere.

While the production sharing agreement (PSA) between Eni and Egypt remains private, Egypt’s standard and past PSAs indicate how production from Zohr will likely be shared. Before Egypt sees any gas, Eni will take up to 40 percent of the field’s output to recover its development and exploration costs, with a yearly recovery limit of 20 percent of Eni’s total investment costs. The remainder of the production will be split between Egypt and Eni somewhere in the range of 60-40 to 69-31 (EGAS-Eni) depending on the production volume, whereby higher levels of production correlate to higher percentages for EGAS. [12] In the likely case that the field’s daily flow rises above .5 bcf/d, Eni will be entitled to 31 percent of the field’s post-recovery production. Consequently, if Egypt looks to keep all the field’s production, a strong possibility due to its gas deficit, it will have to pay Eni for its allotment of the post-recovery production. Egypt’s recent purchase price revisions make this last possibility quite attractive to Eni.

Over the last year Egyptian officials, recognizing the price ceiling’s effect on production, have systematically renegotiated the purchase price international oil companies receive, with Eni’s price revised in July to a range of $4-5.88 MMBtu—a much better rate than Eni could get on the markets.[13] Thus, if as expected the field produces 2.5 bcf/d at an average price of $4.0/MMBtu, the field would bring in a total profit of $3.65 billion per year.[14] With 40 percent of total production allotted to cost recovery and at least 31 percent of the remaining production under Eni’s ownership, the Zohr field provides ample income for Eni to both recover its capital costs and bring in revenue—a revenue stream that, in dollar terms, would provide Eni with around $1.13 billion per year.

Nonetheless, it is still unclear precisely how Eni’s portion will be used, with some stating that the company will be free to utilize it as it pleases and others stipulating that it has already committed its portion to Egypt.[15] This latter possibility would be likely if Eni’s PSA with EGAS follows Egypt’s standard format and grants EGAS priority in purchasing Eni’s portion of production.[16] In either case, if Egypt chooses to purchase Eni’s share, Eni could potentially be compensated in either cash or gas. If Eni is paid in cash, Egypt would owe the company up to $2.5 billion a year—$1.4 billion for recovery costs for five years and a further $1.1 billion for Eni’s share of production. Alternatively, Egypt could agree to pay in gas, in which case Eni would likely try to export it as LNG. Each possibility comes with its own respective caveat.

Egypt is already a substantial debtor to a number of a foreign energy companies, including Eni, BG, BP, and Dana Gas. [17] While Egypt’s energy debts have steadily fallen since 2012, Egypt’s revised natural gas purchase prices could make it harder for Egypt to service these backlogged debts. Consequently, Eni may prefer the safer payment schedule that LNG exports provide. Yet unfortunately for the Italian energy giant, LNG exports may not be an option. First, under the PSA, Egypt very likely has first dibs on Eni’s portion of the field’s gas, which it desperately needs for its economy. Second, even though Egypt has two idle LNG plants sitting on the coast of the Mediterranean basin with capacities of seven and five million tons per year, utilizing them to liquefy Eni’s share of the new gas would add roughly $1/MMBtu to already steep deep-water production costs, in turn cutting into Eni’s cash flow.[18] This option is further clouded by the impending glut in the market due to the new large LNG supplies from Australia, the United Sates, and perhaps even Israel. Hence without an export option and bound by a PSA, Eni’s best, and arguably only, option is to negotiate cash payments from Egypt.

Despite a potentially difficult payment schedule, Eni, which faced substantial losses in Libya and recently had to cut its dividend payments, will find that its discovery is a boon to its company and shareholders.[19] Even if Eni does not see revenue from the find for at least four years, and becomes a larger creditor to Egypt in the process, the find will reflect well in the minds of investors and most likely support its share price.[20]  Moreover, the new Zohr field could turn Egypt’s economic fortunes around. While global market factors and domestic needs negate Egypt’s ability to translate the Zohr discovery into gas export potential, it provides the necessary resources for Egypt to become once again energy self-sufficient, in turn positively affecting Egypt’s economic climate. Egypt’s domestic industrial base could find that it can confidently resume manufacturing capacity expansions, and foreign investors may grow to look more favorably at industrial investment in Egypt.[21] Indeed, the Zohr field could translate positively for all parties involved.

[1] “Eni Discovers a Supergiant Gas Field in the Egyptian Offshore, the Largest Ever Found in the Mediterranean Sea,” Eni Press Release, August 20, 2015, http://www.Eni.com/en_IT/media/press-releases/2015/08/Eni_discovers_supergiant_gas_field_in_Egyptian_offshore_the_largest_ever_found_in_Mediterranean_Sea.shtml.

[2] Note on measurements:  Most studies in the United States and the Arab/Persian Gulf discuss natural gas in cubic feet, while European, Asian, and Russian studies tend to use cubic meters. The translation is 36 cft = 1 cm. However, the price of gas worldwide is computed in $ per million of BTUs [MMBtu], since a million BTU is quasi equivalent to 1,000 cft. Thus the industry often prefers to use cft because it allows it to estimate quickly the cash value of production and reserves.  Another translation rule of thumb is that 10 cm per year is close to one cft per day. In the case of Egypt a reservoir of .8 trillion cm will be equivalent to 36 billion cft, representing an overall potential value of over $125 billion at $4/MMBtu, while a production of 2.5 billion cft/d will equal 2.5 trillion BTU, i.e., about $10 million/d.