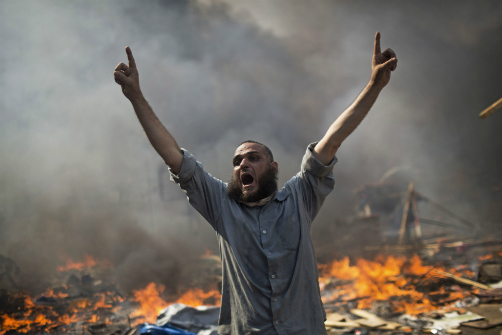 Days before the first anniversary of the August 14 violent police crackdown on the Rabaa and Nahda squares in Cairo, Egypt's High Administrative Court ordered the dissolution of the Muslim Brotherhood’s Freedom and Justice Party and the liquefaction of its assets.[1] Since the ouster of Mohamed Morsi in July 2013, the Muslim Brotherhood and its supporters have faced a state crackdown. Thousands are currently in prison and hundreds have been killed in clashes with security. State authorities accuse the group of waging militant attacks across the country.

As the anniversary approaches, Muslim Brotherhood supporters have launched a campaign on Facebook and Twitter, giving several titles to protests they plan to hold on August 14, including “The Decisive Battle Intifada” and “The Blood Revenge Intifada.” It appears that August 14 will likely end up as yet another violent day in the year-long confrontation between the Sisi-led government and several Brotherhood-led political Islamic groups.

One key reason why Thursday’s demonstrations are likely to be more violent, compared to recent similar demonstrations marking significant 1st anniversary occasions for Brotherhood supporters, such as Morsi’s arrest on July 3, is not just the large number of deaths in Rabaa and Nahda a year ago, but the deep division that continues to mark the debate on what exactly happened on that day. For supporters of Sisi, the police attack against demonstrators was justified, considering that some of them were armed. And while some Brotherhood supporters exaggerate the number of their dead on that day, claiming between 3,000 to 6,000, their opponents insist that the number is around 600. Human Rights Watch reported that up to 1,000 were killed at both sit-ins in what it described as “the worse incident of mass unlawful killing in Egypt’s modern history.”[2]

Former Interim President Adly Mansour appointed in December a fact-finding commission made up of judges to look into all the violence that has rocked Egypt starting June 30. The commission is required to complete its work by September 21. But that committee has very limited powers; its spokesman said that their role was limited to “collecting and documenting information,” and later handing them over to the president to take the necessary action. The commission it has no authority to summon witnesses for questioning, or to hand over evidence, and has no mandate to hold any individuals accountable. Like all fact-finding commissions formed by several former governments in Egypt to look into the deaths of demonstrators following the January 25 Revolution that ended the 30-year rule of former President Hosni Mubarak, none came to decisive conclusions, and no one was held accountable. There is no reason to expect that this commission will be different.

The National Council on Human Rights, whose members include several prominent human rights activists and public figures appointed by the president, were deeply divided over a report they issued in March on the police breakup of the Rabaa and Nahda sit-ins. On the one hand, the report said that the police used violence only in response to provocation from the Brotherhood supporters; on the other, the report said that the police used excessive lethal force and acted in such a way that increased fatalities.[3]

Brotherhood demands are still maximalist: they insist on restoring Morsi’s presidency and ending what they consider the “military coup;” they also demand the trial of Sisi, Interior Minister Mohamed Ibrahim and senior police officers involved in the Rabaa and Nahda breakup, and considering those killed by police as “martyrs.”  All this makes any possible compromise with the current government even more difficult, if not impossible.

Brotherhood supporters proved more resilient than expected, holding demonstrations throughout Egypt over the past year, sometimes bringing the country to a standstill, as was the case six weeks ago when they marked the first anniversary of Morsi’s July 3 removal. Although they deny that they have any involvement in terrorist attacks in which hundreds of policemen, army officers, and civilians were killed over the past year, including suicide attacks in Sinai and several major cities, there is no question that the Brotherhood benefited from the ongoing state of chaos, arguing that the army’s involvement to end Morsi’s rule was the main reason behind ongoing violence. Yet, on Brotherhood websites and in social media networks, there has been a clear tendency toward justifying violence against police and army, particularly using small, homemade bombs, all in the name of revenge for those killed in Rabaa, and in numerous other confrontations, or for those who were allegedly tortured in prison. Worse, the language of hatred is shrill on both sides: Muslim Brotherhood opponents have accepted the criminalization of the party and the mass killings and arrests of its members, and some Muslim Brotherhood supporters have turned to insulting ordinary Egyptians who support Sisi.

Meanwhile, the Egyptian security establishment proved to be no less determined in crushing its opponents. Independent human rights groups estimate that 20,000 to 30,000 members of the Brotherhood and other Islamist groups are in prison.  Except for those who managed to escape to their main key backers in Qatar and Turkey, nearly all top Muslim Brotherhood leaders were arrested, including General Guide Mohamed Badie, his influential deputy Khairat Al-Shater, Essam Al-Eryan, and Mohamed Beltagy. Badie has been sentenced to death three times in separate trials after he was indicted of masterminding several violent incidents in which policemen and civilians were killed.[4]

Furthermore, thousands of Brotherhood supporters and members of militant Islamic groups were put on trial, receiving heavy prison sentences. One judge in Minya caused an international uproar when he sentenced more than 1,200 suspected Brotherhood sympathizers to death in two separate cases after they were convicted of attacking police stations and killing officers on the same day of police dispersal of Rabaa and Nahda sit-ins a year ago. The sentences are not likely to stand on appeal.[5]

Recognizing that one of the key strengths of the Brotherhood was their massive wealth due to their involvement in lucrative businesses and donations they get from backers worldwide, the government has also cracked down hard on their finances, freezing assets of Brotherhood leaders, closing down charities and even schools they owned.

Former President Morsi is in no better situation. He faces very serious charges punishable by death in several trials, including espionage and passing secret national security information to other countries. And after officially declaring the Brotherhood a “terrorist organization” late last year, Egypt’s Supreme Administrative Court ruled on August 9 that its political arm, the Freedom and Justice Party (FJP), must be dissolved for undermining “national unity, social peace, the democratic system and threatened Egypt’s national security.”[6] The fact that the government did not dissolve the FJP over the past year was seen as a sign that it might be willing to compromise, leaving the door open for the Brotherhood to reintegrate in the political system if they would agree to give up their demand to reinstate Morsi and to stop referring to what happened on July 3rd as a military coup. The party has not scaled back its demands, and the banning of the party indicates that the door for compromise is now shut.

Brotherhood followers have been gearing up for the “big day” on August 14, holding scattered demonstrations in the past few days, and blocking major roads and bridges in the capital Cairo. Yet, however eventful the Brotherhood protests against the Sisi-led government on Thursday end up being, they will definitely not be the last chapter in the ongoing confrontation between the two sides.