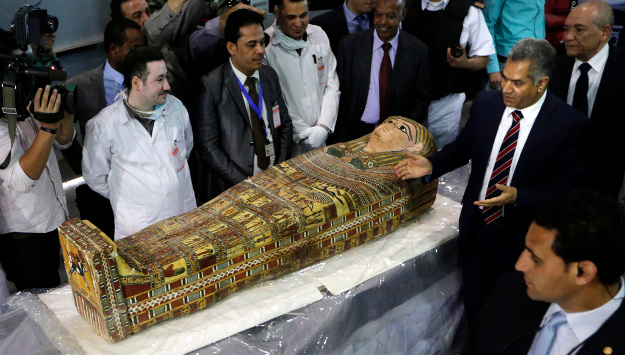 This article was first published on Huffington Post.  The Antiquities Coalition and MEI are co-sponsoring a regional conference in Cairo on May 13-14 to reach an agreement on steps to combat antiquities looting.

Serene stone reliefs from ancient Egyptian temples, model boats used to ferry departed souls through the underworld, and a 2,600-year-old sarcophagus were among the smuggled antiquities recently displayed in Washington, D.C. by the Department of Homeland Security. The repatriation ceremony that saw a portion of the U.S. government's more than 7,000 seized relics returned to the Egyptian government was a small but noble victory.

But it was only a snapshot of a long war of cultural annihilation that the Middle East and the United States are losing to international criminal networks and extremist groups like ISIS. While the world shares in our responsibilities, Americans' global leadership, and many of our citizens' culpability in the illicit trade, place a heightened responsibility on us to go beyond repatriation.

This war is about more than relics. The connection between the erasure of heritage and human atrocities is long-standing, as oppressors obliterate the past by erasing symbols of conquered cultures. From Caesar's arson of the Library of Alexandria to the Nazis' destruction of synagogues to the Taliban's demolition of the Bamiyan Buddhas, eliminating cultural identity is a strike against the spirit of a people.

April 24, 2014 - Deborah Lehr of the Antiquities Coalition, discussed the sharp rise of looting and racketeering and the damage it is doing to Egypt's critical tourism sector.

In recent months, ISIS has ransacked the ancient site of Nineveh, where the first stirrings of civilization arose, attacked the Mosul Museum and torched the city's library, and demolished the spiritual gates of an ancient Assyrian palace as they bulldozed the 3,000-year-old Iraqi city of Nimrud. This cultural cleansing has spread like a virus beyond Iraq and Syria to infect Libya, Yemen, Mali, and Egypt and is threatening nearby Lebanon and Jordan. Extremists have even called for the destruction of the Sphinx and Pyramids.

Hiding behind their public acts of desecration is a more cynical pursuit for cold cash. What the looters don't destroy they sell to fund their operations and further spread extremism. With over a third of Iraq's archaeological sites now under extremists' control, antiquities looting has become one of the top sources of funding for ISIS, according to the Congressional Research Service.

Even as the United States opposes the Islamic State through military and diplomatic efforts, it remains the world's largest market for this illegal plunder. Too often unwitting American collectors, auction houses, decorators, and other antiquities enthusiasts are inadvertently underwriting the causes of terrorists, paying for soldiers who seize villages and swords that behead civilians.

From the start of the Arab Spring in 2011 through 2013, declared imports of antiquities from five Middle Eastern countries rose a staggering 86 percent, and legal imports to the United States from Iraq alone have risen over 1,000 percent. The illicit trade, while difficult to measure, is believed to be significantly higher.

Middle Eastern countries can and will do more to stem this illegal trade. Ministers from across the region will meet in Cairo this month with experts in trafficking, heritage law, and terrorist financing to hammer out new ways to fight cultural racketeering and halt funding for ISIS.

But the United States can and should play a greater leadership role as well, with or without the military intervention that some have called for. Here are some specific actions it and the international community could take to stop extremists from benefiting from our markets:

Embargo the import of blood antiquities. All nations should implement United Nations Security Council Resolution 2199, which prohibits trade in cultural property from Iraq and Syria. American leadership would set the stage for other countries to follow suit and to expand this ban to all countries currently under threat from religious extremism.

Appoint a senior government point person. A U.S. administration coordinator, preferably at the National Security Council, should develop and execute a proactive strategy among the five agencies currently at work on this issue -- State, Treasury, CIA, Homeland Security, and Defense -- to combat trafficking. Congressmen Chris Smith and Eliot Engel have a bill before the House that deserves serious debate.

Fully enforce U.S. import laws and prosecute cases. More illegal artifacts coming in require more agents and prosecutors to stem the flood. Publicizing best practices and penalties within the antiquities industry and its customer base can help dry up demand.

Convene a global summit on breaking the link between antiquities and terror. The Obama administration should convene an emergency summit that would bring the "supply" nations in the Middle East together with the "demand" nations -- including the United Kingdom, France, Germany, Japan, China, and the United States -- to seek and implement global solutions to the crisis.

We haven't a moment to lose. Stopping this illicit flow of goods and saving cultural heritage, especially in a time of crisis, is not a choice of people versus objects. It is an essential part of our global security, a means to eliminate an important revenue stream for our mutual enemies, and a reminder of our shared heritage.