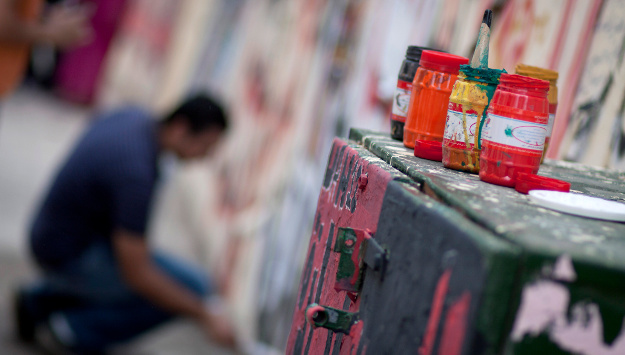 Alexandria, like Cairo, is a mismanaged city with little to offer by way of basic services, much less cultural activities. But unlike Egypt’s insular, desert capital, it is a Mediterranean city, cooler, less polluted or crowded than Cairo (with just six million inhabitants), no longer a cosmopolitan hub but open to the world in material and other ways. There are signs here of a trend toward “social transformation”—a focus on the immediate surroundings, the city itself, to explore and expand its possibilities.

The artists who comprise Gudran Association for Art and Development believe they have a social responsibility “to abandon the traditional spaces of exhibition and performance, activate our artistic practice in the street, and stimulate contact with all aspects of Egyptian society.”[1] Since 2000, Gudran has converted several downtown Alexandria spaces into workshop, exhibition, and performance venues, while organizing events in local coffee shops and in the labyrinthine passages between buildings.

More than a simple formula to revive the city by bringing art to the streets, Gudran aims to confront the “crisis of imagination” suffered by people largely deprived of a decent education, unexposed to the arts, and lacking an informed appreciation for their city’s history. “The problem with youth in our culture,” says Gudran General Manager Sameh El-Halawany, “is that they need help to think differently about their future.” The challenge was “to protect our culture from within, from its essence, to strengthen that seed and grow outward.”[2]

Alexandria, like the rest of Egypt, has undergone a sort of cultural homogenization since the 1952 Free Officer’s Revolution, in part due to the exodus of well-established European and Levantine-origin populations. But this diminished diversity is more a consequence of the authoritarianism embodied in both religion and the state that rewards obedience and conformism while punishing individual initiative. Gudran’s work to encourage self-expression reflects the belief that a city is not just a backdrop for people’s lives, but a canvas on which to draw them.

For its first project, the group focused on El-Max, a traditional fishing town (population 15,000) just west of downtown Alexandria that was slated for demolition, presumably to make way for real estate development. Faced with the prospect of losing their homes and livelihoods (El-Max supplies 35 percent of Alexandria’s annual fish consumption), residents began to neglect their surroundings. The condition of houses and streets deteriorated; crime was on the rise.

El-Halawany admits that the idea that art might save El-Max from despair and/or demolition was “utopian.” But Gudran’s interventions—forging new community ties and reducing El-Max’s isolation—attracted the attention of both media and the municipal authorities that helped rescue El-Max from oblivion. The evictions were called off. Not everyone was supportive; local imams spoke out against them at Friday sermons. “We’ve learned not to be afraid,” says El-Halawany, “if it’s not the imams it’s the priests or local officials who raise obstacles—we just keep moving around them.” The El-Max center is now managed by a Gudran-trained team of local youths.

To give art a public, interactive presence, artists had to change their agendas; instead of believing that “the public must follow us,” says El-Halawany, “we had to move out of our ateliers into the community.” Cafés are Egypt’s main gathering places especially for youth, who comprise 77 percent of Egypt’s unemployed.[3] Gudran approached café owners for permission to stage concerts, theatrical and story-telling performances, events that helped build audiences while expanding the traditional repertoire of the cafe to become an ‘artistic platform’ that attracted and inspired new artists.[4]

The community has proved responsive, with volunteers and donors stepping forward. Alexandrian businessman Nicola Katsprisi donated a small utilities building that once served the adjacent (now demolished) Cinema Realto, in downtown.  Cleaned and restored with the help of local volunteers, El-Cabina opened in 2010 as a lending library with a basement recording/rehearsal studio (rented at 5LE, less than a dollar an hour) and an outdoor courtyard that doubles as a concert venue. An underground music scene is emerging; dozens of bands book the studio and El-Cabina hosts an annual week-long citywide music festival (produced by violinist and Gudran member, Ayman Asfour).

In 2013, Gudran launched Wekalat Behna, a center for filmmakers, in the former offices of Behna Films, an internationally renowned film production and distribution company founded in the 1920s. Sequestrated by the state under Gamal Abdel Nasser, the 12-room flat was returned to its rightful heir, art collector Basile Behna, after a 35-year-long court battle. Behna donated the space to Gudran to assist aspiring filmmakers and preserve his family’s archives, a chapter of Egypt’s rich but unsung cinematic history; as he put it, “We shared the same perspective on the role of art in society, that it belongs to the people.”[5]

Wekalat Behna is located in a sprawling neoclassical building in Manshiyya Square, built in 1892 as a latter-day caravanserai, with shop fronts and interior courtyards housing café’s, workshops and small businesses.  Closed for more than 50 years, the Behna office was in a state of collapse. On his first visit, filmmaker Mamoon el-Azmy fell through a floor, then led the restoration efforts performed largely by volunteers, including 27 participants from CISV, an international organization that supports youth initiatives.[6] Egypt’s old buildings are typically “modernized” with dropped ceilings and tile floors, but the masonry of this four-meter-high space was left exposed, the arched windows, door frames and parquet floors sanded and varnished, “to keep the history in the walls,” as el-Azmy put it.[7] Wekalat Behna comprises exhibition, work and meeting spaces, a filmmaking unit, archive, and screening room.

Around half of Gurdran’s core staff of 18 full and part-time paid members are women. The management approach, emphasizing creativity and teamwork, is rare in Egypt where workplaces mirror the same top-down decision-making hierarchies as the state. All members share organizational duties in different venues and projects while contributing special skills. Many began as volunteers, and this is their first, formative work experience.  Funded by grants from the Ford Foundation, the European Union, and local and foreign donors, Gudran envisages self-sufficiency through charging small admission fees to events, collecting a commission on sold artworks, and other money-making activities.

Gudran members see their commitment to preserve and enhance the aesthetic and intellectual value of their communities not as a job, a social service or political act, but a way of proactively living well. At a time when Egypt’s youth is feeling increasingly trapped and excluded, Gudran offers an alternative view of what it might mean to grow up in Alexandria and a convincing demonstration of how the desire to enrich the present can become a force for social change.

According to Basile Behna, it’s a matter of “investing in the evolution of history, to have an effect in later years.” Thanks to the work of Gudran, Alexandria’s future is now a shade brighter.