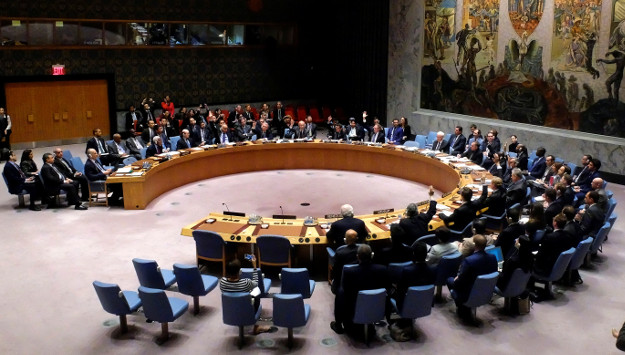 In this Weekly Briefing, MEI experts Robert S. Ford, Gonul Tol, and Ruba Husari provide analysis on issues including the UNSC's inability to administer diplomatic solutions in Syria, the rebuilding of diplomatic ties between Russia and Turkey, and OPEC's ongoing consideration of how to control member state oil production.

Diplomatic efforts to resolve the Syrian conflict have reached another dead-end. U.N. special envoy Staffan de Mistura’s offer to escort former Jabhat al-Nusra (now Jabhat Fateh al-Sham) fighters out of Aleppo generated opposition indignation and demands that the U.N. replace him as envoy. His ability to mediate is badly diminished. Although it gained 11 votes among the 15 members of the U.N. Security Council, a Franco-Spanish draft resolution calling for a halt to aerial bombings triggered a Russian veto. Shortly afterwards, a Russian draft that accented withdrawal of rebel fighters failed when it gained only four votes. New Zealand may try to present another text calling for a halt to fighting in Aleppo, but Russia will keep blocking any tough text.

Demands from Secretary John Kerry and French Foreign Minister Jean-Marc Ayrault that there be war crimes investigations against Syria and Russia are little more than show; there is no mechanism that can hold Moscow and Damascus accountable now.

Russia meanwhile is pushing against its isolation. President Vladimir Putin met with Turkish President Recep Tayyip Erdogan yesterday, their third meeting since August 9. Turkey’s public tone backing a halt to the Aleppo bombing has remained relatively measured. Erdogan still prefers a new government in Damascus, but he also needs an agreement with Russia about the ongoing Turkish military operation in northern Syria against Syrian Kurds and the Islamic State. What Erdogan must avoid is a direct confrontation with Russia that would leave Turkish forces in Syria, or Turkey’s Arab allies operating along the Turkish border, exposed to new Russian air attacks.

Increasingly tense relations with the United States and the E.U. seem to be pushing Turkey and Russia closer. The latest in the Ankara-Moscow rapprochement is the signing yesterday of a strategic energy deal during Russian President Vladimir Putin’s visit to Istanbul. Turkey and Russia signed an agreement for the construction of a major undersea gas pipeline, which will allow Moscow to strengthen its position in the European gas market and cut energy supplies via Ukraine, the main route for Russian energy into Europe. Both Washington and some European governments oppose the project, but it provides Ankara and Moscow leverage over Europe in the energy market.

Turkey is so keen on rebuilding ties with Russia that President Recep Tayyip Erdogan has been surprisingly quiet on Moscow’s operation in Aleppo. Erdogan has also toned down his criticism of the Assad regime. By cultivating closer ties to Russia, Erdogan not only hopes to signal to the West that Ankara has options, but also build up a mechanism with Russia in Syria that would prevent any complications between the two countries stemming from Turkey’s military incursion into its southern neighbor. Thanks to the reconciliation between Russia and Turkey, Moscow gave the green light to Turkey’s military operation in Syria. Turkey in return reportedly agreed not to help rebel forces in Aleppo.

The ultimate test to how far the Turkey-Russia rapprochement can go in Syria will be the battle for the ISIS-held town of al-Bab. Turkey has pledged to recapture the town, but doing so would enable Syrian rebels to threaten regime gains around Aleppo, which may not be tolerated by Russia. OPEC is yet to make any progress on the implementation of the agreement reached in Algiers last month to cap the group’s output to 32.5-33 million barrels per day. However, the announcement alone in late September, engineered by Saudi Arabia and Iran, was enough to boost the oil price. Russian President Vladimir Putin’s follow-up announcement yesterday in Istanbul backing OPEC’s production freeze further supported the oil price, with Brent crude hitting the $53 per barrel mark at one point.

Russia, whose oil production has been hitting new post-Soviet records recently, had always maintained that it could not join hands with OPEC producers to cut output because most of its oil operations are in the hands of non-state operators. But the global supply glut and the slump in oil prices has taken its toll on its oil revenues, albeit not in the same measure as OPEC members. That explains the recent change in tone coming from Putin and his energy minister Alexander Novak, suggesting Moscow should consider joining limits on production with OPEC.

So far it’s a general framework of an agreement, not the effective detailed agreement, that is propelling the oil price. If OPEC wants to maintain the $50 per barrel floor, it needs to keep that talk up, including on possible understandings with non-OPEC producers, before it tackles the upcoming challenges head-on. The biggest challenge is a deal among the OPEC-14 on individual caps and how to enforce them while dealing with emerging wild cards, such as Iraq. Russia might also have to deal with its own wild card. After Putin’s remarks, the head of Russian oil giant Rosneft said he remained opposed to an oil cap.