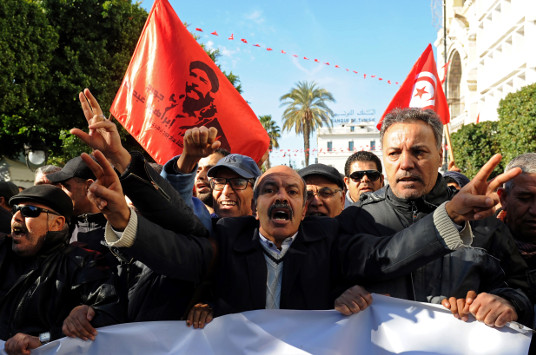 Since Jan. 3, Tunisia has been experiencing scattered protests all over the country. The protests, which continued through the second week of January, follow the entry into force of the national budget for the 2018 fiscal year. It aims to reduce budgetary deficits and increase state revenues—so much so that state revenues from taxes make up 65 percent of the whole budget. The budget contains significant tax increases on consumer services and goods, especially non-essential goods such as tobacco, alcohol, beauty products, and perfumes. These increases apply to everyone regardless of how much income they declare.

Several political parties expressed concerns over the budget during monthslong deliberations in the Assembly of Representatives of the People (ARP), Tunisia’s legislative body. The budget was passed on Dec. 7, 2017, with 132 votes for, 21 against, and 14 abstentions. After its passage, parties from the opposition that voted against the budget’s approval later called on their followers to take to the streets in protest.

Some analysts attribute the unrest to austerity measures imposed by the International Monetary Fund (IMF), notably through a $2.8 billion loan that is tied to promised economic and social reforms. This is a more viable explanation for the protests than the 2018 budget alone, as it is clear that both political parties and independent advocates knew the content of the budget long before it was cleared through the Assembly. Why wasn’t it protested before its passage? Where was the participation of civil society during the process? Why not keep the budget in the Assembly until it took into consideration the concerns of civil society and matched the will of the people? It is difficult to discern the sincerity of the protests, especially as they are primarily backed by political parties that were deeply familiar with the draft budget before they voted on it. The discourse used by the opposition sounds deeply populist at times, and the entire set-up reeks of an apparent bid to raise poll ratings before May’s municipal elections.

The demonstrations failed to gain the sympathy of the middle class and picked the wrong event to galvanize around. The economic troubles facing Tunisians today are the result of seven years of economic policy and decades of corrupt authoritarianism, not the 2018 budget. However, rather than dismissing the protests, observers should recognize that they are a forewarning of what’s to come. This most recent social movement required purposeful mobilization to take place. Civil society organizations and political parties called on their members and followers to protest very specific aspects of the 2018 budget, and activists from the informal youth movement Fech Nestannaew—Arabic for “What are we waiting for?”—have well-defined, strategic objectives, as well as succinct grievances. The real protests will come in a few months, when Tunisians from the lower-to-middle classes start to feel the pinch that the budget will have on their pockets and manifest their anger spontaneously. They will direct their anger toward the political elite.

Further, the manner in which law enforcement reacted to the demonstrators will only act to intensify that anger. According to the Ministry of Interior, police arrested over 806 demonstrators during the first two weeks of January, some 200 of them between the ages of 15 and 20. Local human rights organizations have accused authorities of “inexplicable violence,” and international organizations have called on authorities to stop using “excessive force” in dealing with protesters.

Now that the demonstrations have tapered off, the government needs to work hard to address future ramifications of the 2018 budget before unrest strikes again. The government must also understand that to alleviate financial pressures, Tunisians need a lot more than a few extra dinars per month.

Setting up new youth centers, such as the one that President Beji Caid Essebsi inaugurated on Jan. 14 in the marginalized neighborhood of Cite Ettadhamen, does little to address the economic problems Tunisians are facing at a structural level. Neither does increasing monthly aid for needy families from 150 to 180 Tunisian dinars, another measure taken the same weekend. Instead of building shiny new centers, the government must work together with the private sector to usher administrative reforms that support scaling existing companies and growing emerging startups. The government must also reform the education system, which places a heavy emphasis on the hard sciences while ignoring the economic benefits of vocational training. More should be done to ensure employability after graduation—by, for example, establishing career centers in every major public university and hiring trained career counselors to guide students. According to a student union leader in 2016, there are at least 7,000 university graduates without jobs in Sidi Bouzid alone. The Tunisian government must work to fulfill the promises they made to their electorate and stop beating around the bush with superficial proposals.

These reforms require political stability and do not happen overnight. They take years, if not decades. But Tunisians today need visionary politicians that think beyond the next elections. They need policymakers who don’t just look to extinguish sporadic fires, but who look to address the roots of the many economic hurdles they face. The political elite should listen closely, because Tunisians today are not just protesting tax increases. They are expressing their unfulfilled expectations.

To alleviate financial pressures, Tunisians need a lot more than a few extra dinars per month.