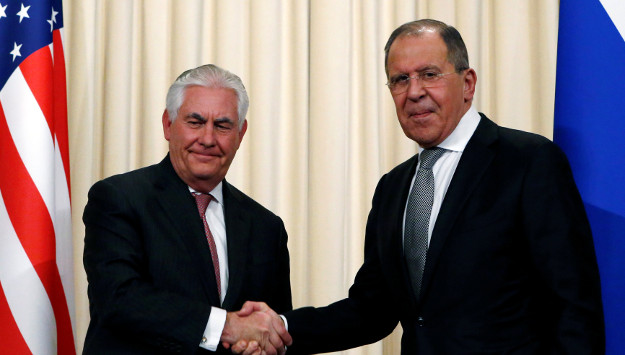 In this week's Monday Briefing, MEI experts Charles Lister, Alex Vatanka, and Jonathan M. Winer provide analysis on recent and upcoming events including the meeting between Russian Foreign Minister Lavrov and Secretary of State Tillerson, Iranian President Rouhani's battle for re-election, and the efforts to strike a deal for the future of the Libyan state.

Having discussed Syria together by phone on Friday, Secretary of State Rex Tillerson and Russian Foreign Minister Sergey Lavrov will meet in person in Washington on Wednesday. If Russia gets what it wants, Syria will again be the first topic on the agenda.

Moscow has invested all of its cards in the Astana process and the establishment of four "de-escalation zones" in Syria over the weekend. However, the de-escalation memorandum signed by Russia, Iran and Turkey on May 4 raised more questions than answers and the U.S. State Department is far from convinced of the deal’s durability.

As with previous multilateral agreements, this latest initiative lacks any enforcement mechanisms, meaning violators will face no consequences. Russia, Iran and the Assad regime are permitted to continue attacks on suspected al-Qaeda-linked groups, which happen to be conveniently present in all four zones. The memorandum spoke of deploying third-party observers, but the Assad regime has said it would treat such a move as a hostile act. That is just the start.

Although this Russian-led initiative talks of de-escalation zones instead of cease-fires, precedent tells us that, ultimately, this deal is no different to previous ones agreed with the United States. Russia has a great deal to lose should this initiative fall apart, which makes acquiring a more committed U.S. statement of support extremely important.

Lavrov will be seeking just that on Wednesday. However, Tillerson would be wise to maintain the existing U.S. position of distance. “Good luck to the guarantors,” as one U.S. official told me.

President Hassan Rouhani is finding himself in uncharted territory as attacks on him by hardliners increase. His re-election strategy has suddenly shifted into a full-fledged assault on the generals from the Islamic Revolution Guards Corps (I.R.G.C.). The shift will surely galvanize the reformist masses that only reluctantly backed Rouhani in 2013, but it is a risky strategy given the I.R.G.C.’s knack for reprisal.

The incumbent president is accused of economic mismanagement, a weak handle on corruption inside the government and an intrinsic inclination for compromise with the West, which the hardliners paint as a serious handicap. In order to fend off such charges, and given real uncertainty about his ability to secure a second term, Rouhani has come out swinging. By openly calling the I.R.G.C. and other unelected centers of power responsible for the most repressive actions inside the regime—such as economic extortionist tactics; the imprisoning of opposition political leaders; and provocative gestures that alarm the international community—Rouhani is betting popular opinion in Iran will rally behind him before the vote on May 19.

That estimation is highly probable. The risk is that his reference to ‘those’ unelected is commonly perceived as a jab at the top authority in the regime, Supreme Leader Ayatollah Ali Khamenei. This is where Rouhani has to be careful. There is a fine line between animating an Iranian electorate that has a proven preference for anti-status quo candidates, and prompting Khamenei to fear for his grip on power as the regime’s ultimate authority.

After many failed efforts and false starts, Fayez al-Serraj, the prime minister of Libya’s U.N.-brokered Government of National Accord finally met with Libyan National Army General Khalifa Hifter in Abu Dhabi on May 3. The two explored a possible compromise deal designed to end the stalemate that has existed since the reaching of the U.N.-sponsored Libyan Political Agreement on December 17, 2015.

In talks sponsored by the Emiratis and supported by Egypt, the two Libyans reportedly discussed a possible pathway for compromise, whose major elements have been clear for months.

In a nutshell, the current nine-person, and highly dysfunctional, Presidency Council headed by Serraj would be reduced to three people. Irregular militias would be dismantled, their members offered the chance to join the Libyan National Army or the Presidential Guards responsible for guarding governmental infrastructure. General Hifter would lead a military council subject to the civilian oversight of Serraj and Agila Issa Saleh, the Speaker of the House of Representatives (HoR). The prime minister and speaker would agree on a cabinet, which would be promptly approved by the HoR. All parties would agree on national elections, to take place in early 2018.

Absent a deal, Libya faces further fighting, humanitarian crisis, and economic collapse. But given reports that the talks could move to Cairo as early as this week with the participation of other key players such as Agila, Libya’s political leaders have the chance to take further steps to reach a compromise that rescues the country.

Completing any deal will remain immensely difficult, given low levels of trust, and the constant risk that parochial interests will overwhelm the national good. But the opportunity for progress, and a real positive change for Libya, is real.