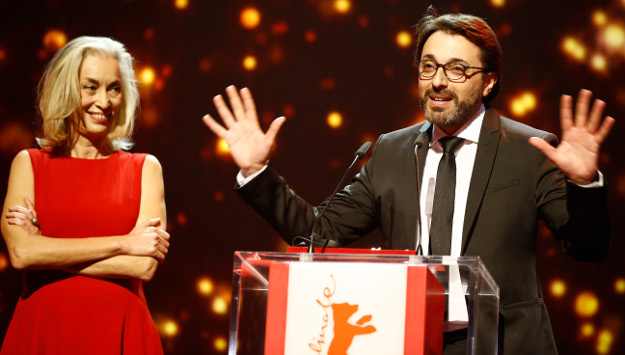 For any major film festival, politics is an imperative ingredient, inseparable from the glamor and publicity organizers always strive to attract. Of all the big film fairs, the Berlin International Film Festival (aka the Berlinale) has forever been known to be the most political, either in its eye-raising selection or in its granted awards.

It was no surprise then to see Arab cinema featured so prominently in the 66th edition of the Berlinale. With a special focus on Arab cinema in the Forum sidebar and significant presence in the other sections of the program, the total number of selected Arab films in Berlin this year represents the biggest participation of Arab cinema in the long history of the fest. It is another watershed accomplishment for the region’s film industry, following the double Oscar nomination for Naji Abu Nowar’s Theeb and Basil Khalil’s Ave Maria.

The noteworthy participation of Arab cinema in Berlin is something to celebrate, but the actual quality of the films is an altogether different story.

A seamless marriage between form and content is what elevate films to excellence; worthwhile topics realized via inventive aesthetics that push the boundaries of the familiar and conventional. Despite the substantial developments Arab cinema has undergone over the past 15 years, most pictures still fail to simultaneously score on both aforementioned fronts.

A prime example is Tunisian filmmaker Mohamed Ben Attia’s debut feature Hedi, the first Arab film selected for the Berlinale competition since Hany Abu-Assad’s mega hit Paradise Now in 2005. Produced by two-time Palm d’Or winners Jean-Pierre and Luc Dardenne, the film—which earned the prizes for best actor and best debut feature—centers on a young upper-middle class automobile salesman (Majd Mastoura) thrust in an arranged marriage with a business acquaintance of his family. Living in the shadow of his older successful brother, the lost and powerless titular character finds freedom in the arms of free-spirited dancer Rym (Rym Ben Messaoud), who shows him a way out of his stifling existence.

Adeptly lensed and acted, Hedi is a well-intentioned, compassionate and sensitive melodrama with a plotline that, nonetheless, is awfully conventional, predictable and overall tiresome. Taking a leaf from John Schlesinger’s British classic Billy Liar, the story of a suppressed young man finding solace with an exotic object of affection has been done to death in countless Egyptian and Arabs films before, and Attia brings nothing new to the table—thematically, aesthetically or narratively. Some observers have likened Hedi’s malaise to the struggle of Tunisian youth to break away from their parents’ repressive traditions and rules—a sentiment powered by the Jasmine revolution—but the film is devoid of the cultural specificities and the emotional ferociousness that made Leyla Bouzid’s Venice winner As I Open My Eyes such a revelation last year.

Simply put, the story of Hedi could’ve been set in any other Arab country with no discernable changes. Attia should be lauded for his progressive sexual politics (Rym is never painted in a bad light and her relationship with Hedi never transpires as an act of transgression) and for the largely subtle tone of the story, but ultimately, the film comes off as a tame, deeply simplistic social commentary about the far more convoluted reality of post-revolution Tunisia.

More ambitious is Egyptian Tamer el-Said’s long-gestating debut feature, In the Last Days of the City. Eight years in the making and receiving every fund on offer, Said’s docudrama, which was shot in 2009, follows a 30-something Egyptian filmmaker (The Kite Runner star Khalid Abdalla in his most soulful performance to date) as he tussles to finish his vaguely-outlined movie while dealing with the agony of his dying mother and departing girlfriend.

If the plotline sounds thin, it’s because there isn’t actually much to it. The film, which had its world premiere at the Forum, is an aimless movie about an aimless character that goes nowhere. Said crams his hazily-conceived film with several unrelated, underdeveloped characters in various stories that are supposed to convey the sense of disconnection in a disintegrating pre-January 25 Egypt. However, those stories don’t amount to anything more than mutilated fragments of a disfigured whole. Said primarily focuses on the growing alienation of his hero from his increasingly violent, corrupt, religiously fraught surrounding, but that point is hammered from the outset, and the director does little to develop this notion into a treatise of intellectual weight or importance.

Despite his shortcomings as a storyteller, Said is a hugely talented visualist with a great flair for frame composition and intricate sound design, delicately illustrating the beauty and overwhelming chaos of downtown Cairo. Yet even his compelling but analogous images become redundant quickly, losing their power and failing to deliver the emotional wallop Said attempts to conjure. In order to forge empathy with the characters, a basic attention to characterization is required, an aspect Said overlooks. Like Hedi, the Cairo it portrays is far more complex than what it displays. It’s a period film with little relevance to a present-day Cairo that would soon endure a subsequent revolution and a coup. The city today is different; the sources of fear, the modes of oppression, and the roots of alienation are all different.

Another Forum premiere that made a big splash in this year’s edition was Saudi romantic comedy Barakah Meets Barakah, another first feature by blogger/activist turned filmmaker, Mahmoud Sabbagh. The polished production centers on the eponymous star-crossed Jeddah lovers (a meek lower class civil servant and a rebellious rich beauty queen) who spend the larger duration of the film searching for a safe place simply to converse. It’s a smart conceit that shows the difficulty of coupling in a strictly conservative country that frowns upon such interactions.

For Western audiences, Barakah opens a rare portal to modern life inside one of the Middle East’s least filmed nations. The class conflict, dominance of mall and consumerist culture, absence of a tangible art scene and the sweeping force of advertisement and social media are shrewdly underlined by Sabbagh; his Jeddah is a place in flux, torn between modernity and enforced traditions. Most illuminating of all, the director frequently reminisces about the liberal culture of the 1960s and mid-1970s, the era of monarch King Faisal whose progressive reforms are all but forgotten now.

Artistically, on the other hand, Barakah is a trying affair. The two leads (Hisham Fageeh and Fatima AlBanawi) have zero chemistry, and their relationship is never convincing. Sabbagh’s film is a middle-of-the-road comedy nowhere as daring as the media has made it out to be.

The two films that broke the mold are Jumana Manna’s Houses Without Doors and Hicham Lasri’s Starve Your Dogs. The first is an inward-looking record of the Syrian conflict as seen from the balcony of a Syrian-Armenian filmmaker; while the second is an art film examining, among several issues, the enduring legacy of King Hassan II’s violent rule.

Both pictures rely on experimentation; the first through detached observation, emphasis on the anxious normalcy of war and the juxtaposition with spaghetti westerns; the second via a heady mix of documentary, fiction and video art. They each present distinctive aesthetic viewpoints in dealing with their weighty subjects, and challenge, infuriate and push the boundaries of traditional Arab cinema. And it’s in these small gems, rather than the other overhyped majors, where the promising future of Arab cinema lies.