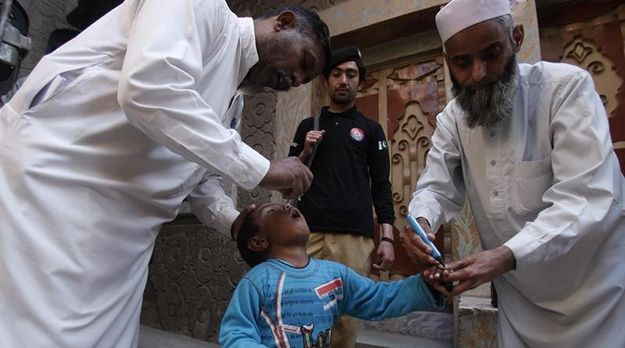 Pakistan is only one of three countries—the others being Afghanistan and Nigeria—in which polio has never been eradicated. Polio in Pakistan has been a particular worry recently, with a disturbing spike in cases. According to the World Health Organization (WHO), 61 out of 77 cases of polio reported worldwide from January through mid-May 2014, or 79 percent, were in Pakistan.[1]

The Pakistani strain has also affected as many as five countries in the last two years. The spreading patterns show that the virus is travelling from Pakistan to Afghanistan, from Syria to Iraq, and from Cameroon to Equatorial Guinea. WHO officials say that the Syrian cases are of the Pakistan strain, and they are concerned that polio will spread from Pakistan to even more countries whose vaccination programs are less than adequate.

Earlier this month, WHO put restrictions on Pakistani, Syrian, and Cameroonian travelers to stop the spread and asked seven other countries—Afghanistan, Equatorial Guinea, Ethiopia, Iraq, Israel, Nigeria, and Somalia—to “encourage” their would-be travelers to get vaccinated. The Pakistani government then issued a mandate that beginning June 1, all Pakistani airport passengers must show proof that they have been vaccinated for polio or be vaccinated at the airport.

Attempts to conduct polio vaccination campaigns in Pakistan have faced formidable challenges over the years. Obvious problems are poverty, political instability, weak government health systems, and poor sanitation. When people are hungry, the importance of vaccination against disease takes on less urgency than it might otherwise. And in areas of conflict, people are on the move, which puts them beyond the reach of health campaigns.

In addition, campaign workers have not had access to high-risk areas, and attacks against them by the Taliban have discouraged many from volunteering in these efforts. Even those who are willing to take the risk sometimes drop out because promised salaries aren’t paid.

Pakistan’s Taliban began an anti-polio campaign more than 10 years ago by spreading rumors that the vaccination was linked to fertility problems and calling it anti-Islamic. For the past seven years, the Taliban has attacked vaccinators and the security officials protecting them, with 31 volunteer vaccinators killed between July 2012 and December 2013.[2] The worst threats faced by vaccinators are in the restive Federally Administered Tribal Areas (FATA) in northwestern Pakistan, a hotbed of the Taliban and one of the areas most affected by polio.

Vaccination campaigns can also be compromised by outside political players. It didn't escape notice, for instance, that the location of the home of al-Qa`ida leader Osama bin Laden was identified in May 2011 through a CIA agent posing as a Hepatitis B vaccination worker. Aid workers in the region expressed outrage, predicting that such ruses would complicate their jobs and make people less likely to trust them. The actual impact is hard to gauge, but it was one avoidable complication in an already uphill battle. (The CIA has recently announced discontinuation of the spying program, citing concerns of the public health community.)[3]

Further, anti-polio campaigns have been plagued by political corruption and mismanagement. Local health officials are hardly held accountable when the polio vaccination campaigns they are tasked with leading fail. Pakistan’s Dawn newspaper recently quoted a senior WHO official as saying that many of these local officials hire their own relatives—in some cases, children—to administer the vaccine.[4] And State Minister for National Health Services, Regulations, and Coordination Saira Afzal Tarar told the parliament on May 16 that some provinces have reported wildly successful campaigns when in fact their efforts have reached only a fraction of children in the area.[5]

Pakistan's inability to rid itself of polio puts international eradication efforts at risk and is fast becoming a focal point of deep global concern. The Pakistan government’s current plan for polio eradication will rely on government funding rather than international donors, which puts ownership of the plan in the hands of Pakistanis.

Prime Minister Nawaz Sharif declared a polio emergency in the country in mid-May and called on the chief of the army to ensure the security of polio teams by deploying troops at the border of the FATA tribal region. Under the new rules, children from FATA will be given polio vaccinations before entering any of the country’s provinces. The 2014 program also includes increased supervision and accountability at the local level; identification of children missed in previous campaigns; stronger cross-border coordination with Afghanistan; local community engagement; and regular status reviews.

On a provincial level, Punjab, Pakistan’s largest province, has imposed travel restrictions barring residents of other Pakistani regions from entering it. Punjab has a population of about 100 million and has not seen any polio cases in the recent past. The provincial government announced plans to administer polio drops at entry points and airports and to deny entry to those who refuse to be vaccinated. If implemented, this attempt to keep Punjab free of polio will face challenges. The government of the neighboring Sindh Province has described the restrictions as a violation of the country’s constitution and of basic human rights. Sindh health minister Sagheer Ahmed has announced that such decisions will be challenged at the federal level.[6]

Will the Plan Work?

Although it is too soon to tell whether the government’s plan will eradicate polio by the end of 2014, it is notable that the plan has already fallen short on one assumption: that the slow season—the season in which transmission tapers off—offers a breathing space in which some headway could be made. In fact, the number of cases reported to date this year during the slow season promises a larger number of polio cases by year’s end than were reported in 2013.

And at least one observer argues that the current plan lacks an important component of any successful plan: community awareness. Samia Altaf, a public health physician, argues that few people in high-risk areas in Pakistan are even aware that polio vaccines are available.[7] Without greater efforts spent to make people in high-risk areas aware of the availability of vaccines and to provide health information to people in a form they can understand, the government’s current plan may not be enough to meet the challenge. Moreover, the government must take on the challenge posed by radical Islamists. If it is to be successful in its eradication campaign it must tackle the politicization of ignorance.

[1] "Polio This Week as of 14 May 2014," Polio Global Eradication Policy, http://www.polioeradication.org/Dataandmonitoring/Poliothisweek.aspx.

[3] Jessica Firger, "CIA Says It Will Not Use Vaccine Programs for Spying," CBS News, 19 May 2014, http://www.cbsnews.com/news/cia-says-it-will-not-use-vaccine-programs-for-spying/.