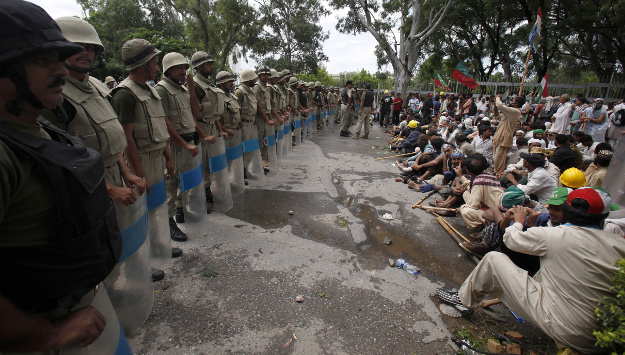 The crisis in Pakistan is coming to a head. Of course it's been building since the 15th of August, but now we're faced with a situation in which this government is either going to survive or, very likely, were going to see a military takeover.

September 4, 2014: Dr. Marvin Weinbaum, director of the Center for Pakistan Studies at The Middle East Institute, discusses the recent protests and political turmoil in Pakistan, and what's at stake for the region and the United States.

It is beleived that the military very much wanted to see these demonstrations get started, and they have not been hesitant to express their dissatisfaction with the prime minister. Some specific issues: the trying of former President Gen. [Pervez] Musharraf is something that is a bone in the throat of the military; They don't like the overtures to the Indians, mainly to increase trade with India; They have not shared his views toward the Taliban. [Prime Minister Nawaz Sharif]'s been much more willing to look for a political settlement.

Now I don't think that there's good evidence that the military has entirely orchestrated this, because if they have, it was a bad orchestration. Clearly it's not following any script here. But they got it started, and now it's taken on a life of its own.

Interestingly, the extremist groups have not taken sides.  The very fact that they've stayed away has, in a sense, been supportive of those people who are trying to oust the government.

India is not helping because, as Pakistan has had to back away under military pressure, at the same time, India has gotten a little tougher in its language towards Pakistan. So the idea of somehow improved relations with India is going to be one of the causualties of what has been going on in the streets.

>>How Protests and the Military are Curbing Pakistan's Democracy

As far as the United States goes, anything we do that is too overt there is going to be viewed as intereference, and it's actually going to be counterproductive. Behind the scenes we're very concerned, because a destabilized Pakistan is not good news for the United States.

What the demonstrators in Pakistan would like to see, first and foremost, is the resignation of Prime Minister Sharif, and going immediately to new elections.  That happened for the first time in May of 2013; As we came out of that election, everybody had a sense of relief that Pakistan was finally a normal democratic country, in that it has transfered power peacefully.  And here we find ourselves 16 months later, where the very thing that was so attractive back then, now seems to have collapsed.

And we find ourselves back where any government that is elected can expect that the opposition is going to declare that it is illegitimate and we can't wait now for the next election, we have to overthrow it. And they'll look to the military ultimately to do it for them because they can't do it without the military, and if the military is against them, they can't get away with it. And that's where we are today.