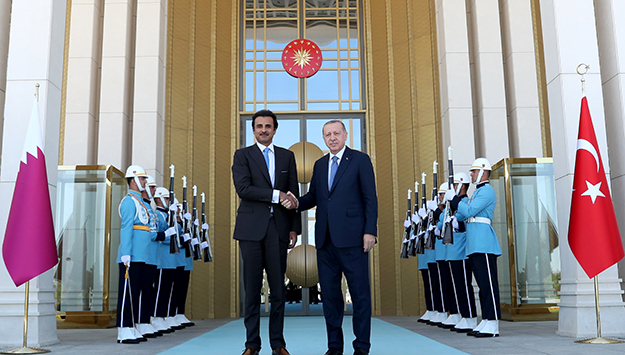 On Aug. 15, Qatari Emir Shaykh Tamim bin Hamad Al Thani pledged to invest $15 billion in Turkey’s economy. The pledge will provided temporary relief to Turkey’s beleaguered banking industry following tense Turkish-U.S. diplomatic relations that most recently led to a precipitous drop in the value of the Turkish lira. The growing economic linkages between Qatar and Turkey, which accelerated after Qatar’s Gulf neighbors imposed an embargo in June 2017, accomplish short-term objectives for both countries. However, the economic relationship between the two countries risks complicating Qatar’s bilateral relations with the U.S. and cannot replace the critical economic relationship Turkey has with other Gulf Cooperation Council countries and European Union member states.

The GCC crisis that began in June 2017 marked a pivotal moment in economic relations between Turkey and Qatar. Following the Saudi-led economic embargo on Qatar—which cut off much of the peninsula’s food imports—Turkish cargo planes and ships delivered thousands of tons of dry foodstuffs, fruit, and vegetables to the country. Turkish exports to Qatar increased 50 percent from 2016 to 2017—reaching $750 million—and Turkey ranked the eighth largest market for Qatari imports during 2017. Annual bilateral trade volume between the two countries currently stands at approximately $1.5 billion, and Turkish and Qatari officials intend to increase trade flows to $5 billion in coming years.

Qatar nevertheless remains a small trading partner for Turkey, a country in which total exports and imports reached a respective $157.1 billion and $234.2 billion in 2017. Turkey’s combined trade volumes with the United Arab Emirates and Saudi Arabia accounted for $14.1 billion during 2016 and far exceed trade volumes with Qatar. Moreover, Turkish exports to the UAE increased by 7.5 percent in 2017, suggesting that Turkish-Qatari economic overtures did not immediately hamper Turkey’s substantial trade relations with the UAE and Saudi Arabia. In the case of a major deterioration in trade relations between Turkey, the UAE, and Saudi Arabia, however, Qatar would be unable to balance Turkey’s trade volumes.

Nor is Qatar overly reliant upon Turkey to manage its current economic constraints, especially those resulting from the Saudi-led embargo. While Turkey consumed approximately 6.1 percent of Qatar’s non-oil exports in September 2017, Oman accounted for 44.6 percent of this export segment. The Omani transshipment hubs of Salalah and Sohar, in particular, became key elements of new supply chain routes for goods going to and from Qatar. Therefore, Qatar maintains regional allies and trading partners beyond its strategic relationship with Turkey.

In addition to expanding trade flows between the countries, Turkey and Qatar maintain modest investment portfolios in their respective economies. Approximately 205 Turkish firms manage approximately $11.7 billion worth of contracts in Qatar. These companies are engaged predominantly in projects related to the 2022 FIFA World Cup—an event that Doha sees as closely intertwined with its global reputation.

Government and private-sector actors in Qatar seem willing to deepen investments. A proposed $2.5 billion organized industrial zone in Doha aims to employ 10,000 Turkish citizens. Statements from the Turkish governmentdirectly attributed the zone plan to Turkey’s support for Qatar during the embargo and claim that Qatar will cover 70 percent of the project costs, reserve development and investment contracts for Turkish firms, and provide commercial real estate free of charge.

Qatar accounted for 65 percent of GCC foreign direct investments (FDI) into Turkey from 2006 to 2016; however, Qatari firms possess a small commercial footprint relative to their GCC counterparts. Saudi Arabia and the UAE account for 75 percent of GCC firms operating in the Turkish economy. Continued trade and investment flows from the entire GCC region are crucial for Turkey, where global FDI inflows have steadily decreased from $17.72 billion in 2015 to $10.86 billion in 2017 amid security concerns and political instability.

The latest Qatari investment in Turkey, which involved a $3 billion dollar currency swap announced on Aug. 20, undercut U.S. efforts to apply pressure on Turkey through punitive sanctions. Though President Donald Trump and his administration have remained officially neutral throughout the GCC crisis, Qatar’s recent investments in Turkey will test Washington’s support as ongoing diplomatic efforts to temper the crisis’s fallout proceed.

Focusing exclusively on Qatar’s expanding influence in the Turkish economy also risks obscuring the roles of other influential economic partners. EU member states provided 67.9 percent of Turkey’s total foreign investments in 2017. Meanwhile, European banks have lent $150 billion to Turkey, with Spanish banks accounting for $80 billion in lending alone. Given the extent of Turkey’s foreign currency debts, the devaluation of its lira, and year-on-year decreases in foreign investment, the Qatari loan of $15 billion cannot be considered a long-term solution to Turkey’s economic challenges.

Qatar has found in Turkey a reliable trade and investment partner to help mitigate the most painful elements of the economic blockade. Qatari capital can help reinforce the loyalty of an influential regional ally today, but Doha must exercise caution in its longer-term management of relations with Washington and Ankara. Turkey will use this round of Qatari investments to stabilize its volatile markets, but the country cannot ignore other important economic relations across the GCC and EU.