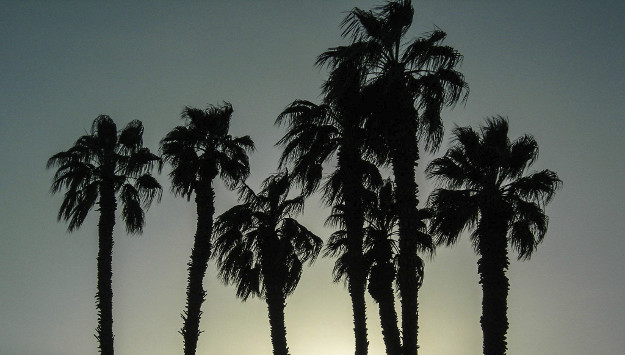 In fact, the obvious connections to the region are more about geography and agriculture—desert scenes reminiscent of Palestine or Iraq, date palms from North Africa—than film.

But the earlier 20th century orientalism that saw I Dream of Jeannie costumes at date festival pageants has given way to a flourishing film culture that celebrates the region in unexpected ways.

The Palm Springs International Film Festival, now in its 27th year, has built a reputation as one that showcases foreign films in the pre-Oscar season of nomination buzz, usually screening about half of the submissions. Uncannily this year, all nine of the foreign films shortlisted from the initial submissions were shown at the festival and all nine directors attended.

These included Jordan’s Theeb (directed by Naji Abu Nowar) about the Arab Revolt of 1916 seen through Bedouin eyes, and Mustang (by French/Turkish director, Deniz Gamze Ergüven) about sexual repression in rural Turkey—both seen as Oscar contenders. In total, over a dozen films from or concerning countries across the Middle East, including Israel, Palestine, Iran, Turkey, Iraq, Algeria  and Jordan, were screened.

The festival’s mix of Hollywood glamor and earnest world cinema—ranging from a first weekend gala celebrating Johnny Depp and Ridley Scott to the opening night Finnish film The Fencer about the Cold War in Estonia—can often seem incongruous.

While visible hipsterism is less evident here than at Sundance or Tribeca, the audiences at Palm Springs are serious and seasoned film buffs.

Retired Midwesterners and elderly Republicans who attend the festival religiously were among the queues to see Oriented, a documentary film about gay Palestinian activists and their balancing act between national and personal concerns.

“People come here to see movies they won’t see anywhere else,” explains lead programmer David Ansen, former artistic director of the Los Angeles Film Festival and past Newsweek critic. “That’s our strength. We’re known for our international program, not so much American independent or Hollywood films. And Middle Eastern cinema is a large part of that.”

In light of recent demagoguery and violence, Ansen says, “it’s more important than ever that people who have so many preconceptions and stereotypes about the Middle East see other points of view, to get the picture from the inside.”

One reason he chose Oriented for this year’s festival was for its “smashing of stereotypes.” Indeed, Oriented, which centers on a group of gay Palestinians living in Tel Aviv, was a highlight. A pithy opening scene features young Khader speaking to a group of gay Israelis, telling them of a BBC reporter hoping to speak with him for a story on “the struggle of gay Palestinians.”

“I’m sorry to disappoint you,” he recounts telling the reporter, “but my mother sends food to my Jewish boyfriend during Ramadan and we all get along fine.”

Filmed during a turbulent 2014 that saw a war with Gaza and a number of violent incidents in the West Bank, the film dances deftly around personal and political issues and multi-layered identities. Fadi, from Bil’in in the Occupied West Bank, has accepting parents, but must deal with his personal guilt when he “falls for a Zionist”—a handsome Israeli soldier. Meanwhile, Naim from Jaffa must face coming out to his conservative parents. The three friends form a group called “Qambuta” aimed at gender, sexual orientation and national equality. Filmmaker Jake Witzenfeld takes the audience on their journey with wit, grace and pathos.

Moments of joy—a trip to a rock concert in Amman full of gay and straight hipsters that puts paid to stereotypes about the Arab world—are balanced by moments of political and personal tensions.

Ansen sees Mustang, the French production with a Turkish female director, as another ground-breaking film.

“Ergüven could have made it into a film about victimization, but she didn’t. The film, which chronicles the plight of young women punished for their ‘loose morals,’ is about regressive treatment of women in rural Turkey, but it celebrates the spirit and pluck of the heroines themselves.”

Similarly the documentary Iraqi Odyssey, by Iraqi filmmaker Samir, traces the history of a long suffering nation, and not through sensationalist stories about ISIS or endless American hand wringing, but through the narratives of a secular, educated Iraqi family scattered around the globe.

While Palm Springs lacks the Iranian population of Los Angeles, it continues to draw large audiences for new Iranian cinema. This year’s highlight was Ali Ahmadzadeh’s Atomic Heart, a film infused with a dark kind of magic realism that traces the journey of a pair of 20 something Tehran party girls and their encounter with someone who may in fact be Saddam Hussein. In a neat programming hat trick, Baba Joon, Israel’s Oscar entry about Jewish Iranian immigrants and the first Israeli film in Farsi, also screened at the festival.

Of course, for the filmmakers who attend the festival, stereotype smashing is only one of their goals. Practical realities like distribution and press coverage are also key.

Palestinian filmmaker Najwa al-Najar, whose film Eyes of a Thief—inspired by the real life story of the Silwad sniper screened at last year’s festival—found the whole experience “beneficial.”

At a time when Clint Eastwood’s American Sniper was causing a stir in Hollywood, the festival offered Najar her first US screening, which was sold out three weeks in advance. It also allowed her an interview in the LA Times and meetings with American distributors.

While the screenings included some disgruntled spectators rather alarmed at the sympathy awarded to a Palestinian sniper narrative, just as many appreciated the film for its candor about the realities of occupation.

“Xenophobia usually arises from lack of knowledge or information,” notes Najar. “Having a festival that includes different and at times unpopular narratives, in a country where that same narrative from the Middle East is told from one narrow perspective, helps widen horizons and can create real understanding and dialogue.”