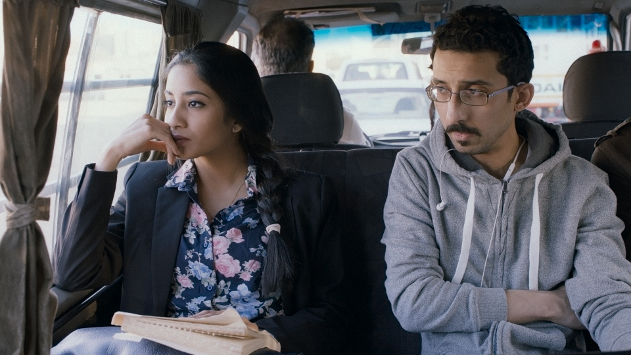 Fittingly for someone who divides her time between two river cities, DC-born, Baghdad-bred, and now London-based filmmaker Maysoon Pachachi says she is a woman who “lives on a bridge.”

“I’ve been a stranger everywhere I’ve lived,” says Pachachi, now 70, whose documentaries have captured life in Gazan refugee camps, downtown Beirut and medieval Cairo. “I’ve moved around my whole life, but I can adapt and fit in wherever I am.”

For the daughter of veteran Iraqi statesman Adnan Pachachi and an acclaimed artist and fierce activist in her own right, the often thorny issue of identity is one that informs both the woman and her films. And her latest project Another Day in Baghdad, her first feature film and one that chronicles the lives of Iraqis in a mixed Baghdadi neighbourhood at the height of the sectarian troubles circa 2006, is no exception.

The film, she says, in an attempt to “hold up a mirror to Iraqi society and ask ourselves ‘what have we become?’”

It’s also an attempt to liberate Iraqi identity from the tyranny of Western media stereotyping, a process that often conflates individuals with their circumstances. Before the invasion, 35 million men, women and children, Christians and Muslims, Arabs and Kurds were often conflated with Saddam Hussein, as if an entire nation were comprised of mini-dictators. After the invasion, the terror that came was conflated with its victims.

“People sit in their living rooms and watch war footage,” notes Pachachi, “but how can they know what everyday life is like there; how people find resilience and resistance, not just to survive but to live.”

The distance between these two sides of the global bridge is often too much to bear. Pachachi describes how during the First Gulf War, she broke down in her London flat, temporarily losing her ability to speak English fluently. She similarly recalls receiving a phone call from her father in Baghdad in the violent aftermath of the 2003 invasion, while she was shopping in Sainsbury’s.

“He talked about how close a recent bomb had come to our home, and how there were body parts on the roof. He wanted to ask me if he should tell my mother or not…I was shopping for vegetables at the time.”

Indeed, Pachachi’s films can be understood as a way to compress the dislocated space between “here and there” and “us and them.”

“When you watch the news and see blood and smoke and people weeping and wailing, do you know anything about the neighbourhood, the people, anything about them beyond being abstract victims?” she asks rhetorically. “I want my films to break that wall and encourage empathy.”

Pachachi’s journey is not an easy one. As an immersive filmmaker and a “repository of other people’s stories,” she rather appropriately has to deal with stereotyping herself.

She recounts a recent BBC interview, where the first question put to her by her interlocutor was, “As an

Arab, Muslim, Sunni woman what do you think about the situation in Iraq?”

“I replied, ‘Well I am a woman, but all the rest is meaningless to me.’ The BBC reporter replied, ‘well that’s what you are,’ to which I replied ‘You are telling me what I am but I’m telling you what I think of myself as being.’”

A few years ago, when Pachachi helped organize an exhibition of objects refugees brought with them from Iraq, a Guardian writer came to interview her. “The first question he asked was,” she recounts with a sense of outrage, “‘are you Sunni or Shia?”

“What kind of question is that?” she shot back.
“Do you ask people if they’re Protestant or Catholic?”

To illustrate the complex, communal nature of Iraqi society, one that transcends the simplistic American style map of Iraq as a nation divided into three neat parts—the Kurdish North, the Shiite South, and the Sunni middle—Pachachi chose the summer of 2006, when sectarian violence reached a peak.

“Suddenly,” she recalls, “the things happening on the street were not done by American soldiers but by Iraqis. We had to look in the mirror and say ‘why are we doing this? Beheading people and putting their heads in plastic bags? Who have we become as a people?’”

It was also a time when shifting identities were augmented by a profound sense of loss. “People who had survived sanctions and Saddam and invasion,” relates Pachachi, “were leaving.”

As mixed communities who had lived together in peace were driven apart by sectarian violence, there were “individual acts of resistance” to the damage and unravelling, something Pachachi calls “making in the face of unmaking” and presenting this reality is one of her goals with this film.

While Pachachi’s primary filmic expression has been documentary, she decided to try her hand at fictional filmmaking, because of its quality of “interiority” and the “intimacy” that can be created between subject and viewer.

The idea for the screenplay began to take shape as she worked on a documentary project called Our Feelings Took the Pictures: Open Shutters Iraq.

The 2008 film documented a project initiated by Eugenie Dolberg, a young British journalist who received funding from the UNDP to do a photographic project with 12 women from 5 different Iraqi cities in 2006. But the UNDP deemed Iraq itself too unsafe for the project, which became a documentary as well as a book, and so the workshops for the women had to take place—with ironic hindsight—in Syria.

As the women from diverse backgrounds and locations each drew “life maps” and told each other their stories of love and loss, survival and resilience, the idea of creating a feature film from the collection of narratives began to develop. When Pachachi met the Iraqi project manager, the writer and women’s rights activist Irada al-Jabbouri and learned of her own stories, “something just clicked,” she recalls.

There was a sense of the extraordinary in her tales of the struggle to live an ordinary life—shopping, picking up her child from school—in the midst of an almost surreal escalation of violence that temporarily prevented her from writing. The result of their collaboration was a co-written screenplay for Another Day in Baghdad, with the fictionalized character of Sara, strongly based on Jabbouri’s own experience, and the rest of the scenario a composite of the crew’s own stories and those of their friends and family.

While production has been delayed by funding issues—with the tricky business of European funding contingent on hiring a European cast and crew—a crowdfunding campaign is underway and almost a third of the way toward raising capital to pay for an Iraqi cast and crew.  An initial workshopped version of the screenplay was filmed last year in Kuwait and Pachachi has been on several reconnaissance missions to Iraq and Jordan to scout out locations and plan logistics. Filming is scheduled to begin this summer, with a release date of March 2019.

With the recent battle against ISIS offering a relative reprieve for Iraqis, it seems that now is the time when people can begin to reflect on what happened a decade ago.

“Film can be part of the healing process,” affirms Pachachi, “And for the people making it, an act of resistance and repair.”