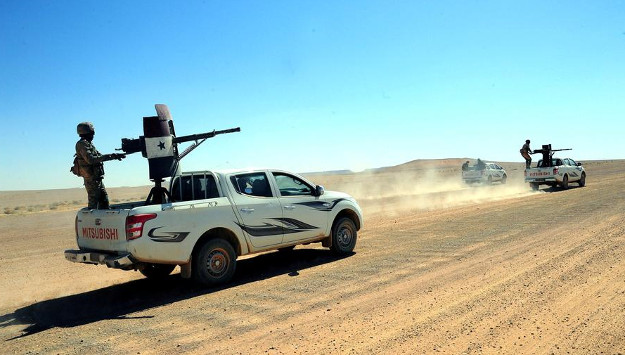 Iran and its allies are sending reinforcements near a de-confliction zone in southeastern Syria to pressure the U.S. military to withdraw from a strategic garrison near al-Tanf border crossing. Both Tehran and Damascus see the presence of U.S. troops training rebel forces in al-Tanf, as well as in northeastern Syria, as a serious threat. Iran also views the expulsion of the U.S. military from the strategic border crossing between Syria, Iraq and Jordan as a prerequisite to securing a sustainable supply line to Syria and Lebanon, as well as to establishing a new battlefront against Israel in southern Syria. The new escalation risks another direct, and potentially much more dangerous, ground confrontation between the U.S. and Iranian-backed forces in Syria in the near future.

On August 30, Iranian media outlets published photos of heavily-armed Harakat al-Nujaba militants deploying to southeastern Syria. “Since it was revealed that America is supporting Daesh [Islamic State] logistically and spiritually at the Iraq-Syria-Jordan border triangle, the Islamic movement of Harakat al-Nujaba has stepped up the deployment of its combatants to eliminate members of this Takfiri terrorist group,” wrote Tasnim News Agency, which is affiliated with the Islamic Revolution Guards Corps (I.R.G.C.). The photos show the Iranian-led Iraqi militia forces in the Syrian Desert advancing toward al-Tanf and carrying with them tanks, pick-up trucks, R.P.G.s and other heavy weapons.

According to the reports, the militiamen are additional reinforcements as scores of Iranian-linked militia forces are already stationed near the de-confliction zone, where the U.S. and its allies are training Free Syrian Army rebels. On August 27, Iranian media published photos from a funeral procession of Nujaba militants killed near al-Tanf region that were transferred to Iraq for burial. Hundreds of Iraqis, including senior commanders from the Iraqi Popular Mobilization Forces (P.M.F.), participated in the ceremony and chanted slogans against the Islamic State and United States.

The commentary in the Iranian media, particularly those affiliated with the I.R.G.C., indicates that Tehran believes that it can force the U.S. to leave al-Tanf by sending more forces to the region. As in the past, the I.R.G.C. may test U.S. resolve and staying power in the southeast by crossing U.S. red lines in the de-confliction zone. In the past, U.S. warplanes have struck pro-Syrian regime forces advancing toward al-Tanf de-confliction zone on several occasions, and Pentagon has made it clear that it will do so in future to protect its forces and allies.

An article in conservative daily Fararu entitled “Potential for Confrontation between Iran and America in al-Tanf?” wrote that the Syrian Army and Iranian-supported militia forces are determined to evict the U.S. from al-Tanf region. “Significant progress has been made to achieve that,” it claimed. According to the article, Iran and its allies are increasingly focusing on al-Tanf, particularly after the decapitation of Mohsen Hojjaji, an I.R.G.C. officer captured by Islamic State fighters near al-Tanf earlier this month. Senior Iranian military officials, including Quds Force Commander Qassem Soleimani, have vowed revenge. The article also cited a claim by Kata'ib Sayyid al-Shuhada, another Iranian-supported Iraqi militia group, that the U.S. and its allies were responsible for the killing of 36 pro-Assad forces near al-Tanf this month. U.S. and Iraqi officials have debunked the claim.

The article adds that the al-Tanf region is strategically important for Iran as it connects Baghdad to Damascus and Beirut. It said the U.S. has succeeded to deny Iran access to the region, but emphasized that pro-regime forces backed by Iran “are trying to bring this passageway under their control.” The article further noted that the pro-regime forces already reached the Iraqi border north of al-Tanf on June 9, cutting off U.S.-backed rebels from moving north and linking up with pro-U.S. Kurdish fighters in Deir Ezzor. It also pointed out that “the Americans are not happy with this” because the route allows the supply of weapons to the Syrian regime through Iraq.

Many Iranian analysts echo similar views. Hassan Hani-Zadeh, an Iranian expert of Middle Eastern affairs, told Tasnim News Agency that the U.S. is seeking to “reestablish terrorists” in al-Tanf to reverse the latest gains by Damascus and Tehran. “Given the defeat of terrorist groups in Mosul and many Syrian regions such as Palmyra, Homs, Deir Ezzor and Homs, the Americans have realized that the six-year joint project by America, Britain, France, Saudi Arabia and Turkey to alter the political and military chessboard in Syria has failed… Therefore, American gunmen are stationed at the triangle of Syria-Jordan-Iraq shared border to take advantage of the situation and regroup other terrorist groups,” he claimed.

Despite close cooperation between Russia and Iran over Syria, many in Iran remain suspicious of Moscow and caution that a potential secret bargain between the White House and the Kremlin may undercut Iranian interests in Syria and the broader region. “So far, Russia has acted as a mediator to avoid a confrontation between the U.S. and Iranian-backed forces in Syria. However, as indicated in the latest incidents and sporadic clashes, it is said that Russia has fallen short of carrying out this role and has even taken the side of America in some ways,” cautioned the article in Fararu. “This view was further reinforced after an agreement between Putin and Trump at the Hamburg summit,” it added.

From Tehran’s view, the expulsion of American troops from al-Tanf not only removes a long-term threat to the regime of Bashar al-Assad, but it also helps consolidate Iran’s strategic plans in Syria and the Levant region. “Liberating al-Tanf and clearing remaining areas from Daesh gives Iran access to the Mediterranean shores and northern borders of the occupied territories,” wrote Alwaght News. “There is evidence that Washington, in addition to consolidating its control over al-Tanf, is seeking to capture Abu Kamal region as well. It aims to control two strategic border crossings between Syria and Iraq after the defeat of the Islamic State. It appears that who first enters the battle with Daesh over Abu Kamal is important,” it added.

If the U.S. maintains control over these two strategic border crossings, according to the article, it will be able to prevent the ground lines of communications for Iranian-backed forces between Iraq and Syria. “A land route to Damascus not only strengthens security of the resistance axis, but it can also increase the resistance axis’s maneuverability power on the ground and its political bargaining power vis-à-vis the opposition.”

Some Iranian outlets suggest that the U.S. is blocking Iranian access to al-Tanf region in order to ensure Israel’s security. “Washington is seeking to create a vacuum along the Iraqi-Syrian border in order to prevent the geographical connection of these two countries and the resistance axis so that it can ensure the security of Israel,” wrote Javan Online, another I.R.G.C. mouthpiece. “The Americans’ goal was to simultaneously advance from al-Tanf to the north and from Raqqa to the south so as to seize Deir Ezzor and divide Iraq and Syria. But this U.S. goal was defeated by the wisdom and courage of the resistance,” the article added.

The growing presence of the Nujaba group in southern Syria will also further alarm Israel. The group has declared that, after the defeat of the Islamic State, its next fight will be alongside the Lebanese Hezbollah against Israel from Syria. In March, the Nujaba movement announced that it had established a new brigade to seize the Golan Heights – claiming that “latest victories” against the Islamic State and Sunni rebels in Iraq and Syria have allowed the group and its allies to focus on Israel. Leaders of the group claimed that members of the new brigade are highly-trained, well-equipped and capable of fighting the Jewish state. “Israel is weaker than a spider web. Islamic resistance is capable of confronting the axis of evil and annihilating the occupying Zionist regime,” Akram al-Kaabi, the leader of the group told Lebanon-based Arabic-language al-Mayadeen news network.

Harakat al-Nujaba – also known as Harakat Hezbollah al-Nujaba – is a prominent Iraqi sectarian group that operates under the leadership of I.R.G.C. Quds Force commander Qassem Soleimani. It has been fighting in Syria since 2013. Kaabi has pledged allegiance to Iran’s Supreme Leader Ali Khamenei. The I.R.G.C. uses the Nujaba group not just to fight the Islamic State, but also as a pressure tool against the Baghdad government, regional countries, and the United States. Kaabi had said that he would deploy more forces to Syria after the ouster of the Islamic State from Mosul.