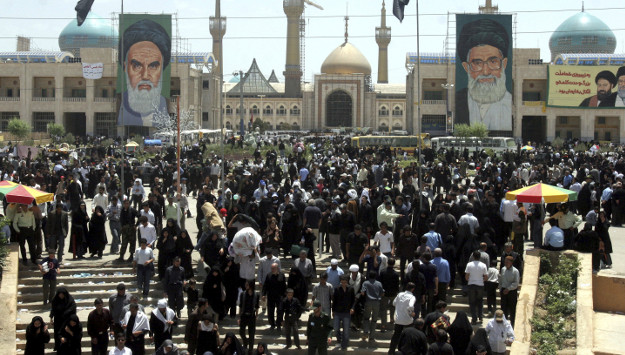 Gunmen and suicide bombers today killed at least 12 people and wounded 42 others in simultaneous attacks on the Iranian parliament and the mausoleum of the Islamic Republic’s founder in the capital city of Tehran – the first major attack claimed by the Islamic State inside Iran to date. While all details of the attacks are not yet clear, Iranian hardliners and the powerful Revolutionary are already exploiting the tragedy to justify their increasing securitization of the Iranian society and costly military involvement in regional conflicts at the expense of domestic priorities. The attacks also add another layer of complexity and peril to an already tense situation in the Persian Gulf region and could further fuel tension between Tehran and Washington.

Within hours of the attacks, the Islamic Revolution Guards Corps (I.R.G.C.) in a statement linked the bloodshed to President Donald Trump’s recent visit to Riyadh, where U.S. and Arab leaders pledged to forge a new security alliance to fight terrorism and counter Iran’s malign activities in the region. “The public opinion in the world, particularly in Iran, sees it as very meaningful that this terrorist action took place a week after the joint summit of the American president and leaders of one of the reactionary regional state, which constantly supports Takfiri terrorists,” said the statement published on the I.R.G.C.’s official website. “The Islamic State’s taking responsibility for it indicates their [U.S. and Saudi Arabia’s] complicity in this brutal act,” it added.

The deputy chief of the I.R.G.C. intelligence went a step further and accused Washington and Riyadh of “ordering” terrorist attacks inside Iran. “The Revolutionary Guards will take revenge against both terrorists and those who ordered them,” General Mohammad Hossein Nejat warned. I.R.G.C. Deputy Commander Brigadier General Hossein Salami issued a similar threat. “We will undoubtedly avenge the blood of those martyred in today’s terrorist attack in Tehran upon terrorists and their associates and supporters.”

Iranian lawmakers and cabinet members also joined the I.R.G.C. in denouncing Washington and Riyadh. “Terror-sponsoring despots threaten to bring the fight to our homeland. Proxies attack what their masters despise most: the seat of democracy,” Foreign Minister Javad Zarif tweeted, referring to Saudi Crown Prince Mohammed bin Salman’s remarks last month that Riyadh would not wait for Iran to take over Yemen and instead take the battle inside Iran. Saudi Arabia has denied any involvement in the Tehran attacks.

Iranian leaders often try to rationalize their costly military adventurism in neighboring countries by arguing that it has helped to keep Iran “an island of stability” in an increasingly chaotic and unstable region. But today’s terrorist attacks – as well as a series of attacks targeting the I.R.G.C. and Iranian border guards in the restive southeastern province of Sistan and Baluchestan lately – discredit the argument. During the election campaign last month, many Iranians risked their lives and voiced opposition to the I.R.G.C.’s support for the regime of Bashar al-Assad in Syria. An opinion survey published last November showed that support for the Iranian regime’s involvement in the six-year Syrian civil war had declined from 90 percent in 2014 to 24 percent in late 2016.

It is, therefore, not surprising that Supreme Leader Ali Khamenei and I.R.G.C. leaders are trying to turn today’s tragedy and security failure into an opportunity to convince war-weary Iranians that there would be more terrorist attacks in the country if the I.R.G.C. stops fighting Iran’s enemies abroad. “These incidents indicate that if the Islamic Republic had not staged a resistance where the center of these seditions are located,” emphasized Khamenei after today’s attacks, “we would have encountered more such problems inside our country.”

Contrary to knee-jerk reactions by Iranian leaders blaming U.S. and its allies for today’s attacks, Reza Seifollahi, deputy chief of Iran’s Supreme National Security Council, confirmed that all of today’s attackers were Iranians who had joined the Islamic State. Earlier today, the Islamic State took credit for the attack and posted a video online that purportedly showed one of its militants inside the Iranian parliament. The terrorist groups threatened to wage more assaults inside Iran.

Although Iran and its Shiite proxies have been battling the Islamic State in Iraq and Syria over the past three years, the terrorist group had not carried out a successful attack inside Iran until today. But as the Islamic State’s self-proclaimed caliphate is collapsing in Iraq and it is losing ground in Syria, the terrorist group appears to have chosen Iran as a new battleground. In recent months, the extremist Sunni group has dialed up sectarian propaganda against the Shiite Islamic Republic – particularly appealing to Iran’s disenfranchised Sunni minority. One recent Islamic State video directly challenged Khamenei’s legitimacy. "Oh, Khamenei, you cursed person, you who has the control of the idolatrous so-called Islamic Iranian regime in your unclean hands, rest assured that soon we will destroy your house like this on your head," he said pointing to ruins behind him.

Iranian authorities have recently claimed that they have managed to foil several Islamic State-inspired terrorist plots across the country. Last month, Iranian Intelligence Minister Mahmoud Alavi, announced that the country’s security forces had identified and disbanded about 30 terrorist cells over the past Iranian calendar year, which ended on March 20, 2017. He did not reveal about the identity or affiliation of the groups.

While Iran’s sizable Sunni community has largely rejected the Islamic State’s call for allegiance and support, the latest developments show that the terrorist group has recently had some success. Last week, Afghan officials for the first time revealed that dozens of Iranian nationals have joined the ranks of the Islamic State in eastern Afghanistan.

Iran’s southeastern region – home to a sizable yet largely marginalized Sunni population – can be a breeding ground for local militant and separatist movements as well regional and international terrorist groups such as the Islamic State and al-Qaeda. Sunni Baluchs, who constitute a plurality of the population in the province, have long suffered state-sanctioned discrimination, economic marginalization, cultural repression, disproportionate executions, torture, detention without trials and extra-judicial killings. Sistan and Baluchestan also borders Afghanistan and Pakistan, where the Islamic State has gained a foothold recently.

Implications for Iran and the region

Inside Iran, the I.R.G.C. and its Basij Force – as well as the country’s judicial and intelligence agencies – are likely to further restrict Iranians’ social and political freedoms. Ethnic and religious minorities, particularly the Sunni community, would obviously be most vulnerable.

The notion that the terrorist attacks would force the I.R.G.C. to curtail its involvement in regional wars is unrealistic. Quite the opposite, the attacks give the I.R.G.C. another justification to continue its involvement in regional conflicts. In addition to Syria and Iraq, the I.R.G.C. may also increase its support for its proxies in Yemen, Bahrain and Afghanistan. If tension between Riyadh and Tehran worsens, the I.R.G.C. may also attempt to destabilize Saudi Arabia’s Shiite-majority Eastern Province. As the I.R.G.C. and hardliners are calling for revenge against the United States and Saudi Arabia, the Rouhani government will also find it more difficult to improve Iran’s tense relations with its neighbors or with the United States.