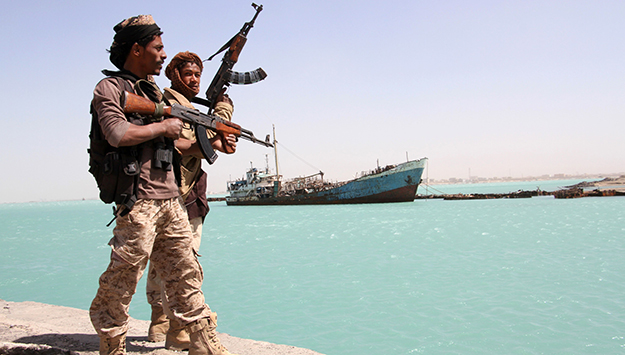 Saudi Arabia temporarily halted all oil shipments through the Bab al-Mandab strait on Wednesday, Jul. 25, after two of its very large crude carriers were attacked by Houthi rebels. According to Saudi and Yemeni officials, the attack was launched from the besieged port city of Hodeida.

The U.N.'s efforts to find a political solution to the humanitarian crisis in rebel-held Hodeida, brought about in part by the Saudi- and Emirati-led assault on the city that began in June, seem to have proven futile. Even before the attack on the Saudi vessels, coalition forces had already accused the rebels of taking advantage of the cease-fire to strengthen their positions by smuggling weapons through the port. Immediately after the attack, Yemeni Vice President Lt. Gen. Ali Mohsen was quick to blame Iran for trying to disrupt international shipping and undermining the peace process.

This is not the first time Houthis have attacked Saudi vessels, but it is the first time that the Saudis have suspended shipments through the strait due to rebel attacks.

The attack came almost 20 days after Iranian President Hassan Rouhani threatened to close the Strait of Hormuz and days after his most recent exchange of threats with U.S. President Donald Trump. The throughput capacity of Hormuz is around 20% percent of global oil trade, whereas merely 5 million barrels of petroleum products are transported through the Bab al-Mandab every day. However, the chokepoint is significant. Any disruption in oil supplies can cause serious destabilization in the global oil market. This could be disastrous for the global economy and importers of petroleum products shipped through the strait. Much of Europe’s crude oil from the Middle East passes through the Bab al-Mandab. Europe imports the bulk of its oil from the Middle East through this the strait. Aside from price volatility in non-physical crude oil, the blockage of the strait could create physical supply shortages, as it would block northbound traffic to Europe and southbound traffic to Asia.

Average oil prices jumped 0.6% following Saudi Arabia's decision to suspend its shipments, although other significant factors contributed to the price increase as well. For instance, the U.S.’s crude inventories, not including its strategic petroleum reserves, are at their lowest since February 2015.

Iran is certainly set to gain from the hike in oil prices, and will be eager to reap as much profit as possible from its hydrocarbon exports, especially in light of the first wave of U.S. sanctions, expected to come into force in the coming days.

The Houthi attack has been interpreted by the Saudis as an indication that Iran may make good on its promise to disrupt shipping in the Strait of Hormuz. Saudi Arabia will try to capitalize on the threat of further disruptions to justify the continuation of its military campaign against the Houthis in Hodeida. Riyadh will also take advantage of the recent escalation in tensions between American and Iranian leaders to reify the rhetoric around Tehran’s destabilizing activity in the region.

It is too early to predict whether there will be further trade disruptions in the strait, as Saudi Arabia is the only country to suspend its shipments so far. It seems likely that the Houthis will continue to threaten strategic transit points. Their alleged drone attack on Abu Dhabi’s international airport yesterday is an exemplar of the Iran-backed militia’s strategy of targeting key logistical and navigational assets. Further escalation of the conflict may have global and domestic repercussions for the U.S. It would in the best interest of the U.S. to work with other stakeholders to guarantee the security of vessels navigating through Bab al-Mandab as soon as possible in order to prevent any further disruptions or spikes in oil prices.