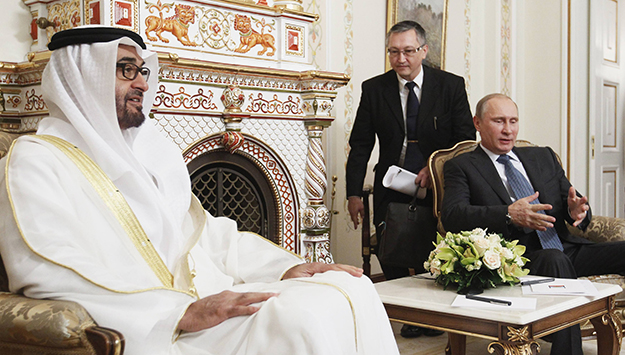 Russia and the United Arab Emirates (U.A.E.) are developing a unique bilateral relationship. The latest manifestation of growing ties occurred at the biennial International Defense Exhibition & Conference (IDEX) in February when Russia and the U.A.E. announced a deal to co-produce a fifth-generation jet fighter in the Emirates. Although Moscow and Abu Dhabi have been cooperating on a range of economic and security issues for years, this was an unprecedented move.

In many instances, the U.A.E. and Russia share similar perceptions of the Middle East’s problems. These range from terrorism and radicalization of Muslim youth to the Israeli-Palestinian conflict, as well as ideas for bringing the Muslim and non-Muslim worlds closer together. Sharing common concerns about Islamists fighting in Syria, the country’s six-year civil war has not fueled tensions in U.A.E.-Russia relations as it has in Moscow’s ties with Saudi Arabia and Qatar. In fact, last June, the U.A.E.’s Federal National Council speaker hailed Moscow’s efforts to promote peaceful negotiations in Syria. The U.A.E.’s leadership has also signaled its willingness, in principle, to accept a resolution to the country’s civil war involving Bashar al-Assad, highlighting some distance between Abu Dhabi and Riyadh’s positions. At the International Aviation and Space Salon in August 2015, held in Moscow one month before Russia launched its direct military intervention in Syria, Emirati and Russian officials coordinated meetings with their Egyptian and Jordanian counterparts to discuss regional security solutions.

This year, with respect to Syria, Abu Dhabi certainly recognizes that the Kremlin is leading the negotiations while Moscow can open lines of communication between the Arab Gulf states and Tehran. In Egypt, the U.A.E. has joined Russia in backing President Abdel Fattah el-Sisi’s crackdown on Islamist groups. In Iraq, Abu Dhabi and Moscow have coordinated in the counterterrorism sphere by equipping Iraq’s security forces in their fight against the Islamic State (ISIS). Libya is important for both countries, which are jointly concerned about the shattered country’s future and are providing support to Field Marshal Khalifa Hifter, who is aligned with the Egyptian-backed secular-learning government based in the eastern city of Tobruk, which rivals Libya’s internationally-recognized Government of National Accord based in Tripoli.

The U.A.E.’s ambassador to Russia, Omar Ghobash, who deeply understands the Kremlin’s interests, is a key player in this relationship. Ghobash has been vocal about the need for Russia’s participation in settling regional issues and promoting stability. He often calls for Moscow’s stepped up participation in confronting Middle Eastern security crises and promoting regional stability. Since 2008, Ghobash has been the vital interlocutor between Abu Dhabi and Moscow. U.A.E. investment in Russia has grown by $8 billion over the past few years, in no small part due to the ambassador’s work.

Russia sees Ghobash’s ideas for fighting ISIS narratives as useful. He argues that combatting these extremists is a global responsibility and participation from all countries is necessary, particularly with regards to ideas, which resonates well with Russian scholars well-versed in Islam in Arab societies. Ghobash’s view of Russia as a great Christian civilization fits Abu Dhabi’s view of moderation, especially with the plight of ancient Christian minorities across the MENA region. His book, Letters to a Young Muslim, is generating considerable attention for boosting the fight against Islamist radicalization.

The U.A.E. and Russia have also built a robust economic relationship. Russian exports to the Emirates are mainly commodities, such as precious metals and stones, steel, as well as ferrous metal products, machinery, equipment, vehicles, chemicals, food, wood, paper, and cardboard. Since the mid-2000s, Russian state-owned giants and private firms have done business in the Emirates and compete for some of the country’s project tenders. For Russia, the U.A.E. represents an attractive business hub for Africa, Asia, Europe, and the Middle East. Tourism has also strengthened bilateral relations with over 600,000 Russian tourists visiting the U.A.E. over the past two years. Meanwhile, the Gulf state has invested in Russia’s gas, oil, real estate, infrastructure, and logistics sectors, and seeks to boost its presence in Russia’s food production sector. Additionally, these two countries share natural resource extraction and are emerging trade centers in diamonds. Russian knowledge of strategic metals, and the untapped resources of Siberia, may benefit from U.A.E. investment. D.P. World is already exploring potential opportunities in Russia’s Far East.

Russia’s future relationship with Iran and the U.A.E.’s close alliance with Saudi Arabia, however, could limit the growth of ties between Moscow and Abu Dhabi. A question which many Arab Gulf officials are pondering is whether Russia is truly neutral in the Saudi-Iranian rivalry or on the side of Tehran, its Shiite allies, and proxies across the Arab world.

Whereas Moscow and Abu Dhabi see Sunni jihadist groups through the same lens, their views of Shiite/Zaidi factions in the Levant and Yemen diverge. Russia’s de facto collaboration with Hezbollah, which all six G.C.C. states have designated a terrorist organization, in Syria is a case in point. Russia’s decision to keep its embassy open in Sanaa even after the Houthi takeover in September 2014 and a deputy Russian foreign minister’s accepting of a Houthi delegation in Moscow last December highlight space between the Kremlin and the Saudi/U.A.E. outlooks on Yemen. Furthermore, it was unsettling for most Arab Gulf officials to observe Russia’s use of an airbase in northwestern Iran last August for military operations in Syria, which underscored an unprecedented amount of cooperation between Moscow and the Islamic Republic at a time when the U.A.E. leaders view the latter as the number one threat to their country.

A report published by the Washington Post revealed that several months ago, the U.A.E. government arranged a meeting in the Seychelles between the founder of Blackwater and a Russian official within Putin’s inner circle to create a line of communication between then-President-elect Donald Trump and the Kremlin, underscoring the close ties between Abu Dhabi and Moscow. According to the report, the U.A.E. arranged the meeting in this archipelago nation to look for ways in which the American and Emirati leaders could convince Russia to move away from Iran, a development which both the U.S. administration and officials in Abu Dhabi desire.

Despite this effort, however, the U.A.E.’s leadership seems realistic in understanding that it can do little to reverse the deepening of Russia’s relationship with Tehran. Abu Dhabi has instead chosen to invest in closer ties with Moscow as the U.A.E. is determined to enhance its efforts with global powers to combat terrorism and tap into new opportunities for trade and investment. Given how much these two countries have to offer each other in geopolitical, economic, energy, private business, and tourism spheres, it is only logical to conclude that Russia and the U.A.E.’s relationship will likely grow in the years to come.