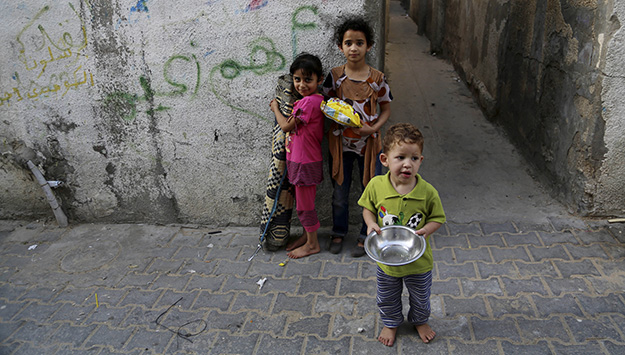 While the international community focuses on the latest refugee crisis fomented by the cascading calamities now engulfing the Middle East, Gaza—home to the region’s first permanent refugees—offers a cautionary lesson about the costs of man-made hardship and instability.

The UN recently reported that the infant mortality rate in the Gaza Strip has increased for the first time since Israel occupied the area in June 1967, in part because of the draconian restrictions on Gaza trade imposed by Israel and Egypt during the last decade.

“The rate had declined quite smoothly over the last decades across the region, including Gaza,” explained Dr. Akihiro Seita, director of the UNRWA health program.[1]

In Gaza, the number of babies dying in their first year consistently declined, from 127 per 1,000 live births in 1960 to 20.2 in 2008. By 2013, however, after years of hardship compounded by economic collapse engineered by Israel in an effort to undermine popular support for Hamas' rule, the rate had risen to 22.4 per 1,000 live births.

Gaza's rate of neonatal mortality—the number of babies that die before they reach four weeks—also increased significantly, from 12 per 1,000 live births in 2008 to 20.3 in 2013, the last year when statistics were available.

“Progress in combating infant mortality doesn’t usually reverse. This seems to be the first time we have seen an increase like this,” Seita said. “The only other examples I can think of are in some African countries which experienced HIV epidemics.”[2]

As alarming as it is, this news was followed by a warning from the United Nations Conference on Trade and Development that Gaza will be uninhabitable by 2020 unless existing environmental and economic trends are reversed.

“Socioeconomic conditions are at their lowest point since 1967,” concluded the report.[3]

It continued: “Three Israeli military operations in the past six years, in addition to eight years of economic blockade, have ravaged the already debilitated infrastructure of Gaza, shattered its productive base, left no time for meaningful reconstruction or economic recovery and impoverished the Palestinian population in Gaza, rendering their economic well-being worse than the level of two decades previous.”

This damning statement offers only the most recent evidence that Israel's siege of Gaza continues to foment engineered destruction of the economic and social foundations of Gaza/Palestine.

This was not always the case. It sounds incredible today, when the continuing misery of two million Gazans is surpassed only by the unprecedented forced migration of Arabs to Europe. But there was a time in the early years of Israel’s occupation of the West Bank, Gaza Strip, and Golan Heights when Israeli leaders trumpeted the redeeming effects of occupation. According to this sunny narrative, Palestinians in the West Bank and Gaza were prospering under Israel's progressive and enlightened rule.

A report from 1981 issued by Israel's Ministry of Defense, “A Thirteen Year Survey 1967-1980,” explained that when Israel captured the West Bank and Gaza, “more than 80 percent of the inhabitants were at or below the subsistence level, working mainly as farmers or laborers. Unemployment and dependence upon welfare were widespread... In Gaza, unemployment stood at 43 percent and those receiving welfare at 70 percent.”

Israeli policy during this period aimed at erasing the territorial and economic division between pre- and post-1967 Israel. “The ‘green line’ actually disappeared, ‘de facto’ if not ‘de jure,’” noted the report approvingly.

“Social and economic change is a notoriously slow-moving process in Arab society,” it concluded. “Yet, in the relatively short span just over a single decade, the Israeli administration has succeeded in bringing unprecedented prosperity to the areas.”

It was true. There were more refrigerators, higher employment, and better health. Occupation, the fable continued, offered a win-win outcome: progress for Palestinians and land and security for Israel, a seductive narrative that obscured more than it revealed about the nature of Israeli rule and Palestinian opposition to it.

Israel's benevolent occupation was always a fiction. There was always an iron fist sheathed in its velvet glove. Policies that enabled economic development and freedom of movement were tactical instruments, employed as long as Israel deemed them useful to advance its insatiable settlement and security agenda.

Israel long ago abandoned the pretense that occupation was good for Palestinians. Today, the costs to Israel—not to mention to the Palestinians—of the engineered destruction of Gaza have become inescapable. The Netanyahu government is now beginning to understand, as is the international community, that starving Gaza and the instability it produces is creating more problems than it is solving. For that reason alone, Israel is now considering a number of options, from a long-term ceasefire with Hamas to a number of measures aimed at Gaza's economic rehabilitation, including a more secure supply of energy and new maritime trade links that will mark the end of the blockade.

A UN report issued in 2012 concluded that for Gaza to be a livable place in 2020, “herculean efforts” needed to be accelerated in such sectors as health, education, energy, water, and sanitation.[4] Today, the challenge is if anything greater. To meet it, Israel, as a first step, must cement understandings with Palestinians that enable the restoration of Gaza's—and thus Palestine's—economy and infrastructure.

[3] United Nations Conference on Trade and Development, “Report on UNCTAD Assistance to the Palestinian People: Developments in the Economy of the Occupied Palestinian Territory,” 2015, http://unctad.org/en/PublicationsLibrary/tdb62d3_en.pdf, 1.

[4] United Nations Conference on Trade and Development, “Report on UNCTAD Assistance to the Palestinian People,” 11.