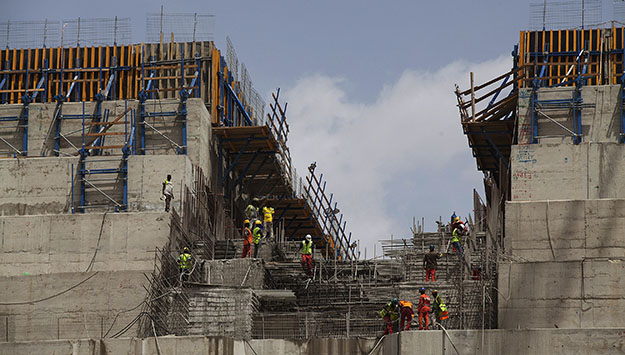 It is a travesty of unspeakable proportions that in the 21st century the construction of a mega-hydropower-generation project, the Great Ethiopian Renaissance Dam (GERD)—whose reservoir can store almost all the annual flow of a transboundary river, the Nile—has been underway for over seven years without an independent, comprehensive transboundary Environmental and Social Impact Assessment (ESIA) conducted first. This situation continues in defiance of international norms governing interstate relations, international environmental law, human rights law and sustainable development customary law.

Ethiopia put off negotiations with Egypt and Sudan in 2010 to get ahead on GERD’s construction first. An ESIA got a green light after 40-50 percent of GERD had been built. GERD is nearing completion and no ESIA is in sight.

In March 2012, Egypt, Ethiopia and Sudan established an international panel of experts (IPoE) to make preliminary assessments of GERD’s impacts. The IPoE report in 2013 indicated that out of 20 documents the panel had requested, seven were not furnished, and two were made available to it only temporarily.

Information in at least nine of the remaining documents was outdated, irrelevant, and/or incomplete, and various conclusions had no evidence that supported them. The report raised concerns about the lack of detailed analysis of numerous vital hydrological, environmental, social, economic, and engineering issues, including locational and structural design ones, and the magnitude and extent of GERD’s transboundary downstream impacts that were necessary to examine before construction. The IPoE recommended a scope of work for a transboundary ESIA.

In 2015, the countries agreed in a Declaration of Principles (DoP) to apply the IPoE’s recommendations, and use the joint studies’ final outcomes at different stages of the GERD project to agree on guidelines for first filling, parallel to GERD construction. This did not sufficiently protect downstream rights; a transboundary measure’s implementation, if underway, should cease for at least 6-12 months to allow affected countries to evaluate the measure’s impacts.

Ethiopia failed to comply even with the DoP. It has demanded, along with Sudan, changes to, and omissions from, agreed on terms of reference, and the IPoE’s scope, for the ESIA, which has stalled negotiations in late 2017.[1] Meanwhile, it has intransigently continued to push GERD’s construction ahead of an ESIA.

Conducting timely transboundary ESIAs is an international customary law requirement. The International Court of Justice upheld it in 2010 in the Pulp Mills case involving the River Uruguay. In 1992, the Rio Declaration on Environment and Development had brought ESIAs to the fore in sustainable development policy and, consequently, customary law. In 1997, the UN Economic Commission for Europe’s (UNECE) 1991 Convention on Environmental Impact Assessment in a Transboundary Context entered into force. The 1997 UN Convention on the Non-Navigational Uses of Transboundary Watercourses devotes 17 provisions to watercourse preservation and protection that cannot materialize without transboundary ESIAs.

International development agencies, including the World Bank, FAO, UNDP, IFAD, UNEP, UNIDO, ADB, AfDB, EBRD, IDB, and IFC, have elaborate frameworks with rigorous requirements and processes, and detailed standards, for environmental and social assessments. These are conducted to verify projects’ sustainability, and to avoid, minimize, mitigate, or reduce their adverse environmental and social impacts. ESIAs are required for projects that, based on type, location, sensitivity, and scale, classify as high-risk. Transboundary hydropower projects like GERD automatically come under this classification. In a world where nations uphold international law, and governments fulfill state obligations to coexist in peace, an ESIA would have been conducted for GERD before its construction began. That’s a different world.

Ethiopia had already violated the more fundamental legal requirement of prior notification when it started to build GERD without notifying Egypt and Sudan. Advance notification and consultation requirements are rooted in general principles of international law, and enshrined in instruments including the 1967 Helsinki Rules, the UNECE Convention, and the UN Watercourse Convention, as well as the Rio Declaration. The whole point of prior notification in this context is to allow countries concerned with a transboundary measure to make timely assessments of its potential environmental and social impacts on them, and develop appropriate impact management plans. If a country planning a transboundary measure does not want or care to allow its neighbors to make these legitimate assessments and plans, it doesn’t notify them about the measure beforehand.

Without prior notification, transboundary measures’ harmful impacts become fait accompli. Populations that have the right to know and avoid or prepare themselves for how a measure would affect their lives are denied this fundamental right.

A contestant in a dispute cannot be also the arbitrator. Nonetheless, while Ethiopia obstructs or delays ESIA processes, its officials—usually at every juncture where GERD talks stall—claim the dam will not harm Egypt. They propagandize this parody of surreal perfection in lieu of actual, meaningful professional assessments. The 2013 IPoE report indicated the panel received no information with which it could verify the reliability and accuracy of documents Ethiopia furnished, listing GERD’s purported benefits to Egypt—these documents excluded downstream impact assessments because they had already assumed impacts were insignificant.0

A pivotal stage in an ESIA is the consideration of alternatives after impact assessments have been made and all mitigation measures have been identified. That stage involves comparing series of alternative designs, locations, technologies, operations, and the potential impacts and mitigation options of each, to determine the least damaging configuration. GERD’s construction and “consultation” processes are light-years away from ethical processes and norms, and the outcomes of stability and prosperity they are intended to produce.

Little wonder that Ethiopia rejected Egypt’s request in January 2018 for World Bank mediation. Although as mediator the World Bank may not have been required to apply its Environmental and Social Policy for project financing, its mediation would not have been stripped of the influence of these ethical and legal principles that govern its work.

Countries are monitored for fragility for good reasons. Fragile states not only cause undue suffering to their people, they pose threats to stability and prosperity in neighboring countries and regions. Sudan and Ethiopia are the world’s 7th and 15th most fragile countries. They need support to become stable, but not by undermining another country’s stability.